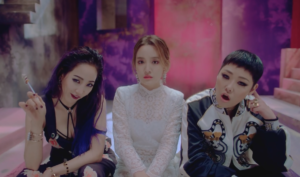 Sometimes, K-pop gifts us with collaborations we didn’t even know we needed until we have them. That’s the case with Younha, Ha:tfelt  (Yenny) and Cheetah‘s recent jam, “Get It?” The three women, all known for very different styles, brought their unique voices together to give us one of the most unexpectedly aggressive girl-power tracks of 2016.

Younha, though known for her ballads, has always been one for experimentation. She has the vocals to play with different styles, and a collab with more in-your-face female vocalists serves as a welcomed change-up to her repertoire. Even better, “Get It?” is all about challenging the myth of the crazy girlfriend, and Ha:tfelt and Cheetah’s over the top personalities applied just the right amount of punch and edge that the track needed.

Make no mistake, “Get It?” is a warning. Younha, Ha:tfelt and Cheetah have had enough, and they’re warning their man that he can either be honest, or deal with their anger; and, as Cheetah reminds throughout the track, “I’m scary when I get angry.” Yet, at first listen, the track sounds more playful than threatening. Underneath the sweet voices and playful tones though, is an honest critique of the double standard that plagues women who show their frustration. “Get it?” isn’t playing around, and there’s genuine bite both in the vocal delivery and the lyrics themselves. 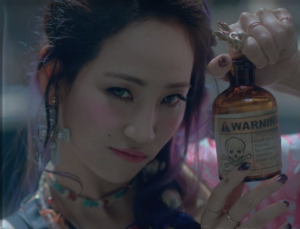 Yeah, I’m sure you did, I’m sure
According to you, you’re innocent
And I’m fucking crazy
Yeah, I’m sure it’s not like that, I’m sure
But you better watch out
If your tail gets too long, it’ll get stepped on
Get it?

“Get It?” in short, is a banger. The backing track is decorated with synth beats and clapping rhythms that are only enhanced by the chanting chorus and call and response interactions of the three women. The verses focus on the play between Younha and Ha:tfelt while the track continues to build toward the climax of Cheetah’s rap in the bridge. Following the bridge, we finally get a taste of Younha’s power vocals through her ad-libs, which decorate the final moments with an appropriate amount of intensity and provide some melody over the chorus. The coy vocals, combined with the strong beat, make the release feel empowering and aggressive in the best way. While it isn’t the easiest song to sing along to, it does have a hook that keeps you chanting “get it?” in your head long after it’s finished.

What’s most impressive about “Get It,” though, is that it brought together three very different personalities and styles and combined them into a cohesive track, while also letting each woman show off her own color. The collab had the potential to take a messy turn, with such different personalities contributing to it, but the final result made the most of the three artists and exceeded all my expectations.

The MV also caters to the contrasting personas of its three stars. We have Younha, traditionally marketed for her soothing vocals, in all white looking naive and innocent. Then there’s Ha:tfelt, who teases with her bottle of booze in domestic scenes. Finally, there’s Cheetah, who takes no crap, threateningly wields a baseball bat, and plays with power tools in her basement. The characterizations are clever, as they all play into tropes men — and more broadly, media — have of the emotional, “crazy” woman. 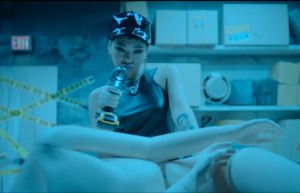 In the MV, Younha is faced with a dilemma: she’s tired of her man’s lying, but her boyfriend refuses to fess up and instead places all the blame on her. Ha:tfelt and Cheetah, then, stand in as the two devils on her shoulder who tempt her with ways of retribution. Ha:tfelt offers the solution of internalizing her pain, and drinking away her miseries alone in her kitchen — not unlike the trope of a drunk housewife (a characterization that she nailed). Cheetah offers the more radical solution of actual aggression to the male, tying him up and dismembering him in the basement. Both women — especially Ha:tfelt — tease and tempt Younha in the group scenes, and we watch Younha gradually become more corrupted throughout the MV. Or, more accurately, we watch her struggle with the double-edged sword of acting on her frustrations. (No matter which path she chooses, she still ends up trapped behind the caution tape like she’s committed a crime.)

First, her wide-eyed, all white innocence is stripped away and replaced with a bad-ass denim jacket and eyeliner. Then, we see flashes of her standing in for Ha:tfelt at the kitchen table, and looking over Cheetah’s shoulder with glee in the basement. By the end of the MV, she’s sneering into the camera, and tugging the mannequin around on a leash.

You’re the cutest when you’re in my control
I’m above you, come crawl here while I’m telling you nicely
I’m warning you, if you keep doing this, I will get mad

The use of a mannequin throughout the MV is an interesting visual, as it is clearly a representation of a real male who has wronged them. This contradicts a point I made last year about violence in MV’s, when I observed that female MVs generally stray away from showing women taking out their aggression on props (mirrors, pictures, teddy bears) as an act of revenge. “Get It” falls more in line with my observation of male MVs, even taking it one step further, to the point where the mannequin is hardly a stand-in prop at all. Though he isn’t living and breathing, the mannequin is very much a man, and it’s he who is being tied up, poisoned, yelled at, and dismembered. By rendering the male character lifeless (immobile and naked) he’s stripped of all agency, and instead all action falls to the three women. There’s no subtly in the violence the mannequin is enduring, and not a lot of context for if such violence is deserved, either. 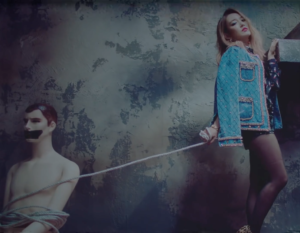 Here’s the tricky part: if it were a male MV, and I saw men tying up female mannequins, or leading them around on leashes, I would quickly call foul (in fact, we at Seoulbeats already have). Yet, when I’m watching “Get It?” I’m rooting for the three women, even though the lyrics hardly warrant the violent imagery. Why? Because I can empathize with Younha’s dilemma. When faced with frustrating situations, it seems that no matter how a female reacts, she is easily written off as crazy as opposed to being taken seriously.  In “Get It?” the three women are embracing the label of “crazy” and turning it on its head, re-claiming it and giving themselves agency over it. It’s not that they’re endorsing violence and/or alcoholism, instead they’re saying so what if this is how you see me? I’m still demanding that you fess up.

The women in the MV are all caricatures, but they hit on a very real double standard of the display of female aggression. Unlike men, who can get angry and still be “cute” or even masculine, women are often forced to nod along and be complacent for fear of being regarded “emotional” or “crazy.” This time, however, Younha isn’t afraid of being crazy: she’s going to get the apology she feels she deserves. In my reading, it’s not so much that Younha actually wants to dismember her boyfriend. Those scenes are meant to be read less as the fantasies she entertains and more the way that her simple act of demanding an apology is read by others. I think that that underlying critique is the point of the MV, and that the over the top (and violent) characterizations are a clever way to address the troubling narrative of the “angry” woman.

Overall, it’s refreshing to see women with the power to be so unapologetically aggressive, but does it cross a line? I don’t think so.

Readers, what do you think of “Get It?” Do you think there’s a double standard for male and female violence in MVs?