The Girls’ Generation subunit TaeTiSeo has made a grand return with title song and mini album “Holler.” A little over two years have passed since we last saw the trio of Taeyeon, Tiffany, and Seohyun in action promoting “Twinkle” together. At that time, seeing the members of Girls’ Generation performing something different from their usual style was exciting. It even spurred on speculation of other potential Girls’ Generation groupings. Alas, the fans got no new subunit, but instead the established subgroup of TaeTiSeo has graced us with the upbeat pop number “Holler.”

At first glance, the stylistic elements of “Holler” feel similar to the “Twinkle” era with a glam aesthetic as the girls take the audience through the different floors of ‘Hotel Holler.’ The introduction is humorous as this onlooker (possible hotel guest?) is met with the “gorgeous,” “stunning,” and “dashing” ladies of TaeTiSeo. The person is starstruck by the girls and instead of simply getting the key and going to his room, the onlooker is treated to a hotel extravaganza.

“Holler” places the three ladies as hotel attendants, hoping to please their guest with the glamor of all of the hotel’s amenities (although one could argue that the main draw is the three themselves). The plot chugs along with the girls dancing in front of a male audience on a long white dining table and on a circular glass platform in a pool-like area. The purpose of each floor is to command the attention of the watchful audience treated to this luxurious scene.

The lyrics also carry this theme of the spectator. The girls try to persuade a romantic interest to not be passive in their lives. They want their interest to embrace the day and embark on a mysterious adventure with them.

“It’s not fun to be ordinary on a bright sunny day.

To a mysterious and unknown world that you’ve heard of when you were young.

TaeTiSeo implores the listener to holler at them and take this adventure — turning the passive spectator into the daring adventurer. It sounds a tad enigmatic, but as the lyrics go further, one might understand this as a metaphor of the girls propositioning their interest to take a romantic chance with them.

Let’s not beat around the bush: Tiffany gets a short rap break here. It’s not cringeworthy per se, but I wouldn’t have minded if they had left it as an instrumental breakdown.

While the tone attempts to portray a fun and light-hearted environment, the MV unfortunately comes across as quite boring. Each floor the girls put on an ostentatious performance for the onlooker. They either dance or lounge around in their ornate settings. The concept seems like the ultimate box set theme for SM Entertainment, who seems to continually find more innovative ways to think outside of the box while not actually venturing outside of the box. 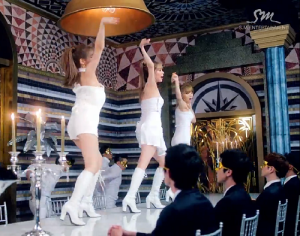 Usually a box set helps to highlight the dance, but in this case the dance is underwhelming. Similar to “Mr. Mr.,” the six male backup dancers have returned. It falters because it doesn’t have the quirky, eye-catching choreography that “Twinkle” had. The moves during the chorus involve throwing a hand in the air during the shouts of “holler.” It’s insipid and does little to complement or enhance the beat of the song.

Also, the last floor’s scene when the girls are partying in front of some expensive looking cars feels awkward. Maybe it’s because of the out of place headphone shot where the girls move meekly at the center of the party or it could also be the bad freestyle dancing where everyone just throws their hands up in the air one after the other.

There are some redeemable moments in the choreography — the staging and blocking of dancers add liveliness to some of the steps. In particular, the moments when Taeyeon interacts with male dancers, such as when she imitates pushing through a door, stand out as memorable and add a fun energy. However, the dance as a whole generally lacks vivacity and feels uninspired.

As a side note, the pink hand chair placed in the pool area is an unexpected prop. Is it supposed to represent the fantasy of having the girl of your dreams at the palm of your hands, is it symbolic of the girls being hoisted into an authoritative role from the support of their pink colored fandom, or is it just an unconventional prop that they found lying around the SM storage space? 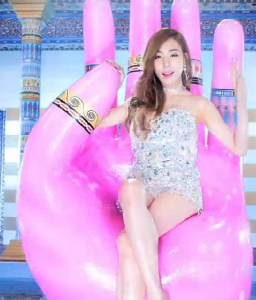 “Holler” as a package isn’t horrible. The MV just feels dull. When TaeTiSeo first came onto the scene as a subunit, they had a polished and amusing debut MV for “Twinkle” which featured a catchy dance and entertaining cameos. There was an effortless flow between scenes, and the girls seemed to embrace being rock stars in that video.

With “Holler,” the MV feels clunky. Each floor is a generic space where the girls either lounge around or dance. Finally, when they reach the top of the hotel in the club space, things become awkward because of how staged it feels, and I just can’t get past that so I have to give this MV a 2.5/5.

What are your thoughts on TaeTiSeo’s latest music video? Were you a fan of their dancing and ‘Hotel Holler’ theme?