Exo's "Love Me Right" is an Aesthetic Overload

What happens when you combine nine boys, football, teen angst, and perhaps a smidgen of hallucinogens? The aesthetic overload that is Exo‘s latest release, “Love Me Right.”

As a follow up repackage to their April release of Exodus, Exo returns with the funky “Love Me Right” in a cloud of pink smoke that somehow manages to be simultaneously over and underwhelming — raising the age-old question, is it possible to just be whelmed?

For the “Call Me Baby” release, fans were led on an extensive and creative journey through the Pathcode teasers, only to be let down with yet another SM box MV. For the lead up to “Love Me Right,” SM took the opposite approach; announcing the comeback one week out, releasing limited teaser pictures en masse (with questionable sports knowledge), and a single teaser video. It was easy to be skeptical of the final product and many fans had resigned themselves to accepting the SM trick of lovely concept photos and a box MV that has nothing to do with the teasers.

Good news, we were so very wrong. Bad news, in an attempt to release Exo from the box, SM may have bitten off a bit more than they could chew in three minutes and thirty seconds.

The music video opens to a montage of mismatched images: Chanyeol taking the field in football gear, Xiumin laying somewhere in the woods, an empty locker room, a beaker, Kai reclined sensually and D.O. upside down in a hallway. When Baekhyun‘s opening vocals kick in, the MV attempts to gain some focus by extending the various cut scenes and interspersing them between quick flashes of choreography. After what appears to be a disappointing loss on the field, we’re introduced to to the nine member football team outside of the locker room.

In their individual cut-scenes, each Exo member seemingly takes on their own high school trope (and tumblr aesthetic). We have Baekhyun the bookworm; Suho the sulking team captain; Chanyeol and Sehun, those boys that hang out in their parents’ basement talking about “shawties”; Kai the hipster, with a flare for destruction of public property; D.O. as that angsty loner who screams in empty hallways;  Xiumin as some sort of high school re-incarnation of Walter White who lives a prim and proper double life by brewing his own drugs and tripping balls in the woods (and maybe it’s a love potion because Chen was eyeing him like a piece of meat); Chen as Xiumin’s trusted buddy; and Lay, well… he doesn’t wear a shirt.

Of course, all these charactertizations come together (or perhaps are abandoned) on the field, where the boys make up one team. We also see the boys cross-over into each other’s cut scenes, in some attempt to link the disparate scenes to one another. 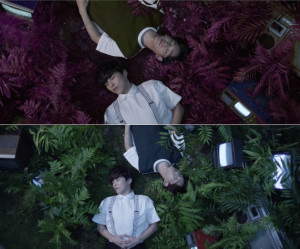 Long story short, there are too many aesthetics and (non) sub-plots crammed into a single MV. Each individual scene and sub-plot is beautifully filmed and colored; the issue comes when all of these images are flashed between one another so quickly that it’s almost impossible to focus on a single aesthetic moment. The colors do play off of one another, with most scenes alternating between a neon hue of red or purple and the contrasting cut of the same scene in natural lighting — this gives some hint at a juxtaposition of something.

Given that it’s Exo-L we’re talking about here, within hours there were dozens of interpretations of the MV making their rounds on the internet. Everything from the Murakami quotes on the wall of Chanyeol and Sehun’s set, to the Alice in Wonderland motif have been read into and analyzed.

By no means do I want to say that these interpretations are baseless; however, I think a more logical summary of the music video is simply SM had a lot of aesthetic inclinations and stitched them together haphazardly. While it’s great to see cohesion between concept photos and the final product — and the motif of teenage angst carried through well enough — there is simply too much non-content content to render a clear plot or intention from the MV.

There is a slightly off-putting discrepancy between the angst of the MV and the upbeat nature of the track. Musically, “Love Me Right” is a logical follow-up to “Call Me Baby,” and in many ways it is much stronger than its predecessor. “Love Me Right” is so very well produced (but that’s a given with SM releases — even if they’re crap, they’re well-produced crap). “Love Me Right,” however, is definitively not crap; in fact, it’s probably the strongest track Exo has put out since “Growl.”

The instrumental back track impressed me instantly. The backing instrumentals of electric rhythm guitars and riffs are not only funky, but add a distinctive instrumental hook to the track (much like the intro of A Pink‘s “NoNoNo”). The guitars in the chorus also function as almost another layer to Exo’s vocal harmonies. The rhythm combines with the pushy vocals to keep the track progressing forward — and the variety of rhythm instruments gives each section of the song a distinct but cohesive flavor. The small samplings of brass, especially towards the end of the song give the track the flare it needed to maintain momentum into the final notes.

Vocal arrangement wise, “Love Me Right” is quite an interesting change of pace for Exo. The part distribution was a little off-putting (only one line for Chen in a pre-chorus? D.O. on the high note? Lay rapping in the Chinese version?), but also gave the track variety and allowed the members’ vocals to play off of each other in a new way. The move of the rap portions to the verse was a welcomed change from the usual Chanyeol-centric rap bridge — and Sehun actually had a lines that didn’t consist of “E-X-O” (though they still included odd English phrases like “Shawty Ima party ’til the sundown.“) The actual bridge, then, could shine with a doo-wop esque vocal breakdown.

Additionally, I’m a firm believer that members can shine outside of the verses, and that’s where “Love Me Right” is most impressive. Members like Chen, Lay and Baekhyun are able to shine even during moments of heavy vocal layering — a testament to the production quality. The group harmonies in the “no no nos” and “yeahs” of the verses in addition to the chorus are spectacular. The adlibs, oh the adlibs, are one of the best features of “Love Me Right.” The main and lead vocalists take on adlibs that compliment their vocal colors, like Baekhyun’s breathy falsetto and Chen’s growled “you’ve got to love me.” These little touches not only give the track a strong finale, but demonstrate the technical competency of Exo’s main vocalists. Really, what’s most enjoyable about “Love Me Right” is that it sounds and looks like the members enjoy performing it.

While “Love Me Right” does compliment the vocal powers of Exo, perhaps the reason some are disappointed in the release is because the track is lacking those unmistakably Exo vibes that tracks like “Growl” or even “Mama” radiated. Though I really enjoy the track, the first few listens of “Love Me Right” had me unconsciously imagining who else could successfully execute the song — which is not really a good thing.

With so many talented members, Exo has the ability to successfully pull off a plethora of concepts and styles and they’ve grown to be one of the strongest performance oriented groups despite internal struggles. The downside to SM’s willingness to experiment with Exo’s sound results in a lack of musical identity.  Instead, SM relies on the marketing of the group itself to sell the track.

Now, in no way am I calling for Growl 2.0, but if Shinee is any indication, it’s entirely possible for SM artists to explore a variety of concepts while maintaining a distinctive feel. I wouldn’t be disappointed if Exo continued in the direction of “Call Me Baby” and “Love Me Right,” but they’re at a point where they should hone in on something distinctive aside from good looking boys and a well produced track. There is a difference between being a dynamic group and simply being a “trend” group, and Exo is walking a fine line between the two.

After watching the MV approximately a hundred times, there are still several questions that remain unanswered; why are there so many bouncy balls? Why does Kai think it’s a good idea to throw a baseball bat at a wall he’s standing directly in front of? Where are the butt pads? Will they dance in full football gear on music shows? Can Sehun only party ’til sundown because he has a curfew? And, most importantly, what the heck does the MV have to do with the song?

Readers, what’s your take on “Love Me Right?”