Exo's "Call Me Baby": A Performance MV Packed with Personality 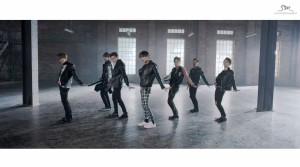 After a whirlwind of dating scandals and member departures and now a barrage of cryptic teaser videos, the boys of Exo are back. Their latest MV is for their title track “Call Me Baby” and features the (now) ten members.

Let’s talk about teasers for a minute: half of the experience of this music video is the teaser journey.

The K-pop fandom (and, indeed, fandoms in general) is well known for impressive sleuthing skills and elaborate theories when confronted with the slimmest amount of information. We all know what happens when hawk-eyed fans catch the slightest glimpse of something in a photo, such as a reflection in a spoon. And the Exo-L fandom is no different. But while a lot of sleuthing is done without the artist intending it to happen — or even usually directly against their will — this time around, SM Entertainment laid out the clues.

If you haven’t checked out the teasers yet, they consisted of ten short video clips uploaded to SM’s YouTube channel. The first starts off with the words “London 15:01.” and focuses on resident poster boy Kai as he wanders through the city streets. 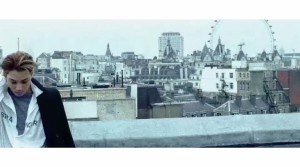 Yes, he is actually in the city! The teaser scenes were filmed in London, and the teaser was released at 15:01 London time, kicking off a clue-hunt that lasts through the next nine teasers. Each teaser focuses on a different member, in a certain city, at a certain time.  Hidden in the video are clues hidden hinting at the time and location of the next teaser. Often, the hands of a watch or the time on a phone would indicate at what time the next teaser would be released, and there would be some sort of clue to hint at which international city the next teaser would be set in. Oh, and of course, it turns out that the first letter of each of the ten cities spelled out the words of their title song “Call Me Baby.”

On top of this, SM began to tweet regular updates from PathcodeEXO, following each teaser release. These updates, when combined with information found in the teaser for that day, would supposedly lead fans to a passcode that would unlock that member’s teaser pictures on the SMTown website. (Pathcode, incidentally, is a clever pun in Korean as it is pronounced identically to the word “passcode.”) It turned the whole passive time of waiting into an interactive game and was definitely a uniquely enjoyable experience. Of course, most of us (myself included) simply waited for the more talented members of the fandom to figure it out and then share the passcode with us. 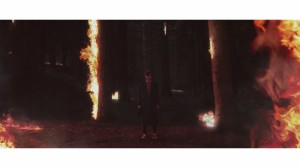 This trend of Exo releasing elaborate and lengthy teasers is, of course, nothing new. Before debut, Exo had what some affectionately dub “Teaser Era,” when a total of 24 teasers were released from late December to early April. (Kai appears in no less than 13 of these.) However, the teasers this time around are on an entirely different level. While not explicitly stated, there is a sense of narrative throughout each of them, even if they are each less than a minute long. The budget for special effects is definitely noticeably higher as well, with each member showcasing his unique superpower in frighteningly realistic portrayals — these are no Weekly Idol-quality computer graphics. Whether it’s Chanyeol burning down an Arizona forest or Tao freezing time in a Barcelona cafe, the superpowers finally look realistic and actually cool.

The camerawork and art direction in each of these is simply beautiful. In stark contrast to SM’s usual model of predictable camera angles in a brightly lit box, these teasers were a breath of fresh air. It’s like something straight out of an indie film. And while not every teaser actually took place in the city that it claimed to be in (most of the Western European cities, such as Baekhyun’s Lyon and Suho’s Marseilles, actually were all shot in Barcelona) it was still quite impressive to see authentically European architecture instead of some studio set. Unfortunately, albeit expectedly, this sudden burst of cinematographic uniqueness and visual creativity was short-lived.

Lo and behold, when the full music video was released, it had exactly zero relation to the elaborate narrative set up by the teasers before it. Consider the fans’ confusion and consternation when they realized that they had been strung along for the past few weeks only to be met with a thoroughly lackluster conclusion. (Of course, there is always the repackaged music video to look forward to, but I would prefer to refrain from speculation, and leave that to our fandom experts.)

That being said, the music video is not at all bad. It’s only in comparison to the teaser videos that you see what the music video could have been. If it had followed the same art direction and plot as the teasers, then the music video could have been really impressive. Instead, it’s a fairly standard SM video, with the boys singing and dancing in various rooms with mildly eclectic fashion and hair choices. The rooms don’t seem to have any relation to one another and include a garage, a living room, a warehouse and the quintessential white-walled, white-floored “void room.” As far as camera work goes, there are a couple of creative and difficult one-take shots, where the transitions definitely seem complex (although the entire music video isn’t shot in one take). 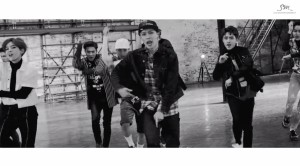 The MV definitely gains most of its charm from the charisma of the members. My biggest complaint with previous music videos “Wolf” and “Overdose” is the stony acting and stiff emotions that the boys try to convey. With MVs shot in this style, similar to “Growl,” the members are much more relaxed, which allows their personalities to shine through. There is no pretense and no sense of having to ‘act a part.’ Instead, the video is arguably what a pure music video should be. Even if it’s lacking in plot and creativity, the MV is solid on what it is supposed to deliver: a well-synchronized dance video with a lot of personality.

And the performance aspect of the video is definitely strong. The song itself is catchy, fun and, again, doesn’t take itself too seriously. Parts are much more evenly distributed amongst the members than before. The loss of one of the main vocals seems to have given SM cause to improve Lay‘s abilities, who takes on several solos (and even more in the Chinese version). The most vocally strenuous parts remain with the tried-and-true vocalists, although the song doesn’t have too many of those parts outside of the bridge. The more technically difficult pieces are found in other songs on the album. 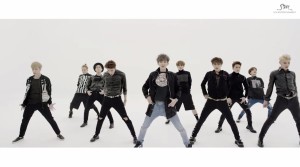 I was also relieved to see that the lyrics of this song lacked the oddness that characterized previous Exo title tracks. There are no references to eating the listener like cheese and nothing to do with drug usage. While the lyrics don’t have sophisticated wordplay or a particularly deep meaning, I found interesting the similarities that the Korean lyrics drew with the Chinese lyrics, perhaps at the expense of the comprehensibility of the latter. Nevertheless, it’s fun to hear parts of the hook sound the same in both languages (마음아 vs 码码, and 닫아 vs. 大大).

Although the choreography might seem less physically demanding than that of “Overdose,” it is arguably more complex in terms of coordinating formations. Members are constantly coming on and off stage, breaking into groups and out into solos. The last line of D.O.‘s first solo, where Lay and Sehun jump out from a single file line, is just visually impressive. Not to mention, parts like the bridge, where each member seamlessly weaves their way into the choreography, take a lot of practice to get each done right. This MV does a great job of highlighting that in the camera angles and direction of the video. The choreography fits the song perfectly and is definitely well executed. 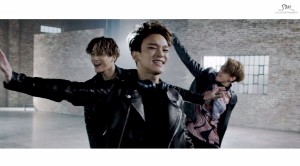 As a testament to Exo’s star power, the Korean version of “Call Me Baby” already has 10 million views within the first week of release, with an additional 5.8 million on the Chinese version. I’d be reluctant to simply attribute this number to Exo’s  fandom. The MV still delivers an excellent dance performance and a catchy song, and you can tell that the members are having fun with it. The teasers were slightly misleading and only set themselves up for an inevitable comparison between the wildly different atmospheres between them, but “Call Me Baby” on its own is a prime example of a K-pop dance MV done right.