Amidst all the controversy surrounding the forced expulsion of Yookung from the group, A Cube’s now six-piece girl group A Pink have been busy gearing up for comeback promotions with their new single “NoNoNo”. “NoNoNo” sees them revert back to their throwback cuteness, taking cues from both their debut song “I Don’t Know” and “My My”.  Check out the MV:

A Pink’s brand of cuteness has always been both a liability and a grace for them. Just one listen to their title track discography and it’s striking just how out of date A Pink’s staple sound seem in the K-pop scene today. With more and more groups ditching the pigtails for eyeliner and lipstick, it’s easy to see that companies are catching up with the idea that sex is what sells these days. Considering how fast K-pop is with jumping on trends, to see A Pink so boldly flaunt their pink giggles and frills is an audacious move on their part indeed. It definitely pays off for them, because the retrogression novelty in their songs hasn’t worn off yet, and for what it is “NoNoNo” is another successful foray for A Pink. The song is extremely similar to “My My”, but for where A Pink are in their career, the derivativeness is less a glaring fault and more an ode to their consistency and it’s impressive that Cube is sticking to their guns and riding it out over switching over to a darker concept in order to leave a quick impact. Sure, A Pink may not brazen with artificial fierceness or release songs that won’t leave you alone, for better or worse. But by keeping to their nostalgic sweetness, there are many old school K-pop fans from the days of SES who probably appreciate “NoNoNo” for the kind of all frills attached pop song it is. 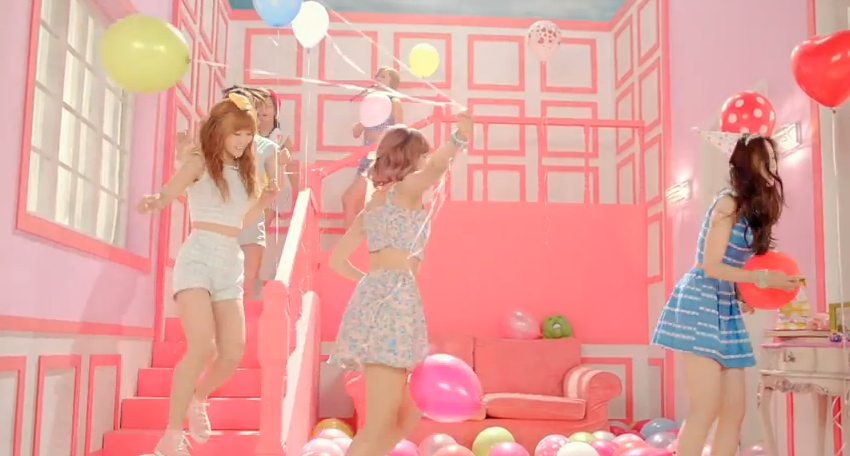 The plot of the Music Video is simple and nothing groundbreaking. Not particularly innovative, but there’s no reason for a pop music video for a song like “NoNoNo” should be. It starts off with the girls of A Pink receiving a package and then foraging into different rooms, baking, blowing balloons, and then finally throwing a party for themselves. No nuanced plot here, but still adorable all the same. If there’s anything that can be said, and it’s to be said for a truckload of K-pop music videos that have been released in the past year, then it’s to up the contrast. The sets are all relatively simply done, the MVs major aesthetics coming from the pastel and light colour palette as well as the girls themselves. Having the contrast decrease and having all the elements in the same lightness, like was the case in the pink room, is an absolute eyesore, and make it difficult to pay attention to any one thing at a time. Other than that, it’s a simple music video that doesn’t try too hard to be something it’s not, and suits the song it’s expressing to a T, and that’s really all someone can ask for. 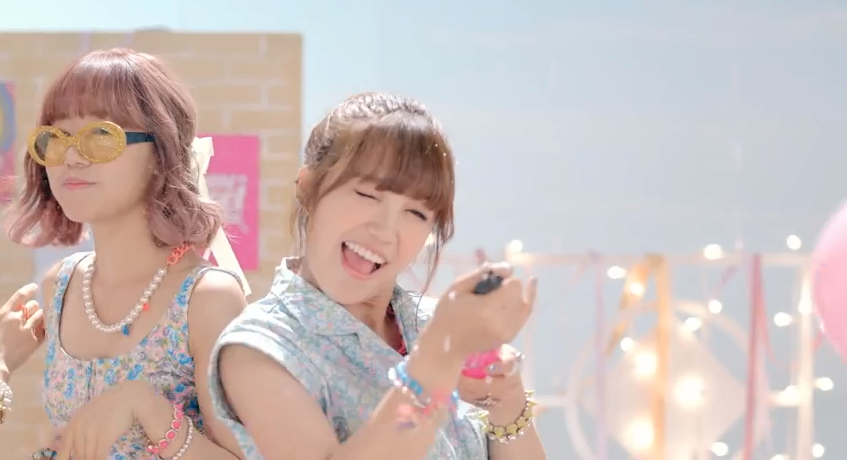 A Cube deserves kudos for splitting the screen time fairly evenly for all six of the girls. Considering how much Cube skewed exposure towards Hyuna when it came to 4Minute in the beginning, A Cube could have easily delegated eighty percent of the song and video to Eunji and Naeun and call it a day. And although yes, Eunji does get a fair more amount of exposure than the rest, it’s nothing beyond what simple marketing would call for. The line distribution though, as well as screen time, is pretty well divided amongst all six of them. Even if it results in certain members getting a questionable amount of lines they can’t really pull, it definitely forces the less useful members to undergo long term improvement and hone their skills. Eunji is so extremely talented that a SISTAR effect has fallen upon A Pink, where basically any semblance of talent other members may have pretty much pale in comparison to the raw power and resonance carried in Eunji’s voice. That being said though, Namjoo and Bomi can sing and hold their own weight, and it’s great that A Cube more or less recognizes that and don’t completely burden Eunji’s voice like Starship tends to do to Hyorin.

All in all, “NoNoNo” is a sweet song with a cute MV to boot. Props are given to A Pink for not floundering around with their concepts, and sticking to something that works for them. A tactic that’s a breath of fresh air in K-pop these days. Unfortunately, the actual technical aesthetics of the music video could have been better, but the formula A Cube has for A Pink right now is perfectly fine.