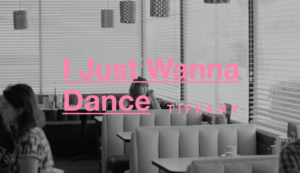 It’s been a long time coming, but this week SNSD‘s Tiffany finally debuted as a solo artist with her first mini album, I Just Wanna Dance. It feels like SM has been teasing Tiffany’s solo debut since Taeyeon‘s successful debut with “I” last fall.

The constant teasing was probably more than enough to build anticipation for fans, but the announcement of Jessica‘s impending solo debut added just enough fuel to the already kindling fire for SM to finally set the date for Tiffany’s debut. After all, a little rivalry never hurt anyone, right?

Being a huge fan of Taeyeon, I’ll be the first to acknowledge that she is often marketed as SNSD’s vocal power-house and that spotlight often places other members into her musical shadow, even with the TaeTiSeo sub-unit. As such, I was excited to see Tiffany break away from the SNSD label to have her own moment in the spotlight as Tiffany the solo performer.  Her talents as a singer are often overshadowed by her marketable personality and signature eye smile, and many know Tiffany more as the bubbly, friendly personality of SNSD with a penchant for pink and fashion than as a distinguished vocalist.

Despite that marketing, we have been given samples in her vocal talents and musical inclinations through her solo stages. Through the years, she’s pulled off some reasonable covers of divas like Ariana Grande, Adele, and Rihanna. During Lion Heart promotions, Tiffany also unveiled her first self-composed track, “Bittersweet & Crazy” which showed a more, toned down, acoustic side to her musicality. When her debut was finally announced for May, I think very few questioned the direction her solo debut would take: poppy, pink, and full of the California girl side of her identity.

In many ways, Tiffany met expectations with the release of the single “I Just Wanna Dance”: a synth pop ode to grooving and her hometown of L.A. Even though it’s a solid release overall, I worry the debut will fall a little short of distinguishing Tiffany as a solo artist for non-fans.

The track may talk about dancing endlessly, but “I Just Wanna Dance” is so mellow that it’s much more suited for easy jamming than partying it up. The pounding rhythm and synth elements of the verses are nice, especially with Tiffany’s cooing vocals. She turns in a solid performance for what the melody gave her, but, unfortunately, the track doesn’t build to anything much beyond a pleasant, repetitive listen.

Even the heavy reverb in the chorus and a slight opening up of the sound in the bridge don’t provide the dynamics the track needs to really hook a listener. The only hint of musical climax comes in Tiffany’s high note at the end of the bridge; but, I’m still not convinced Tiffany is capable of the whistle-range, no matter how many times she tries to conquer it.

For some, the MV will be an aesthetic experience filled with eye candy; for others, it may be quite generic. Tiffany of course looks gorgeous, and right at home whether on the beach or roaming the back streets of L.A. The color scheme is rich in pastels, pinks and reds, and the shots of LA accompany the lyrics quite nicely (minus them all being shot during daytime hours). But then there are also the knee pads, and the exercise-inspired choreography. 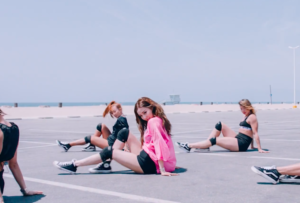 Combine the musicality with the choreography and fashion and there’s no denying that “I Just Wanna Dance” at times feels a lot more like an ’80s workout video than an SM Entertainment release from 2016. Which begs the question: does Tiffany just want to dance, or does she want to become an aerobics instructor?

Not gonna lie, when the title track was announced I immediately giggled at the irony of it. It’s not that Tiffany can’t dance — she could easily dance circles around me — but since SNSD’s debut, she’s had a long-documented public battle with her dancing performances. In some ways then, the song and its accompanying choreography serve as a subtle “ha!” to those who have criticized her.

More than the irony though, the track’s theme and choreography showcase one of Tiffany’s most endearing traits: she’s an impossibly hard worker, who always seeks to improve her craft. In many ways she did settle for a safe debut musically, but she pushed to present a side of herself as a performer that many did not expect. In that regard, I don’t think she fell short at all. (But I still question the knee pads and bicycle move.)

It’s refreshing to see that as the SNSD members begin to make their solo debuts, each debut is taking off in a different direction, freeing the members of the SNSD mold they are expected to perform. Though Tiffany didn’t venture too far at all from the pop genre, she still showcased something new and enjoyable. In this case, safe is not a bad thing — especially if the track manages to be solid and catchy. However, for me at least, the track feels like it’s not only lacking a hook, but more disappointingly it’s lacking personality — something Tiffany herself has in spades and I’d like to see in future releases.