Pleasure And Pain at the 2015 Hallyu Dream Festival 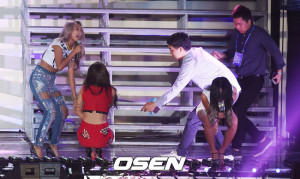 Many of the usual performances arised from this glorified music show, with some video intros and dance breaks sprinkled here and there. There were also some live-time hijinks that stole the show, and almost distracted from the performances. Highlighted below are the more painful and pleasurable moments of the evening, in that order.

While nowhere near G-Friend levels, there were a few moments when a female idol almost hit the floor thanks to a slippery stage. You can see an Oh My Girl member slip during their performance of “Cupid.” And while performing “Somehow,” a DIA member shouts out in surprise after losing her balance.

Sistar’s Soyu and Hyorin, though, had the most noticeable slips; they looked like cartoon characters resisting gravity, at one point. Only Dasom was still standing after the first song, with the other members almost gliding towards the stage crew in search of physical stability. The incident was bad enough to warrant a redo, and the girl group took to the stage again to perform “Shake It.”

The One Who Drew The Short Mic — Red Velvet’s Yeri

Poor maknae — her mic pack appeared to have come loose from where it was clipped on to her skirt, so she ended up having to hold it against her back with her hand. This meant she had to perform the choreograpby with only three limbs, and couldn’t use her purple slap bracelet during the last chorus. Perhaps it was bad karma for attempting to distract Irene at the start? Careful, everyone: it seems no one messes with the Bae and gets away with it.

In addition to Im Tae-kyung‘s performance of  “초련” with Vixx rapper Ravi, three other ballads were performed. Berry Good broke up a run of dance tracks with “My First Love;” BtoB returned to their last promoted single, “It’s Okay,” and final act Shinee opened their set with “An Encore,” off their latest album.

Playing Below Strength, But Still Punching Above Weight — BtoB, Vixx and Got7

Have you ever thought what Got7 or Vixx would be like as a traditional, five-member boy band? Well, this concert may give you that glimpse into an alternate universe. Though N, Bambam, Jackson and Sungjae were missing from their respective groups, Vixx, Got7 and BtoB still gave great performances, as usual.

In other news, I have realised that “Stop Stop It” is a fantastic song.

With stages like these, it’s customary for acts to start their set at the main stage before making their way down to the front stage further out. It usually means one poor idol is left to sing/rap, walk and give fanservice, all at the same time. But some groups changed it up a bit, by doing their walk while doing their talk. This lets the idols relax a bit, and engage better with the audience. B1A4’s Sandeul even serenaded the attendees.

EXID’s performance is also worth checking out as they do the original choreo for “Up and Down,” While Kara’s features the weirdest intro — a UFO flies across the screen to introduce the group and members… Who still turn up in those god-awful Western-inspired outfits. Maybe their theme was Cowboys and Aliens? Still, the ladies gave a great performance and I swear I fell in love with Gyuri during her high note in “Cupid.”

Speaking of horrible outfits, I have made my thoughts known on the fucking disasters that were passed off as Nine Muses‘ “Hurt Locker” outfits. Thankfully, though, the group’s stylists saw sense and dressed the ladies in much more appealing prints and patterns. And not a single cushion to be seen!

Honourable mention goes to Oh My Girl, who ditched their cheerleader uniforms for smart black blazers. The outfits reminded me of The Disappearance of Suzumiya Haruhi, which is only a good thing in my book.

Readers, what were your highlights from the concert?