High4 Enlists IU for "Not Spring, Love, or Cherry Blossoms" 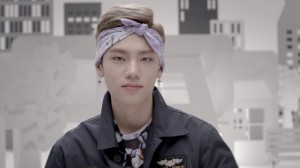 It’s a monumental event, a debut. For the trainee, it’s the culmination of years of training. Even when the number of failed groups trumps the number of successful groups, small companies continue to debut group acts to turn revenue. The latest to try for a slice of the K-pop pie is High4.

The quartet hails from N.A.P Entertainment (yes, that’s the name and I want to know what it stands for) and the group is composed of two vocalists, Myung-han and leader Kyle, and two rappers, Yong-jun and Alex. There wasn’t that much hype going into their debut — except that, oh, yeah, IU would be featured in their first single. That alone would’ve left many wondering: what’re they capable of? Are they on the same trajectory as IU, who’s mustered a number of songs that appeal to a multitude of listeners? Or are they just hiding behind a big named artist in the hopes that they gain fans?

From the first minute in, you know that the former is the more likely conclusion.

Like the song, the accompanying music video is very simple. While IU does steal the spotlight when she enters the frame, the members of High4 evidently have their own moments in their own debut music video. 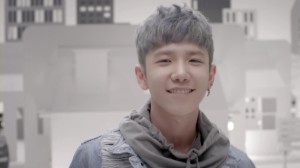 Myung-han, the first member to sing after IU’s first couple of lines, is clearly the main vocal. He has a tone that would suit all sorts of songs and appeal to a broad audience. He also happens to have one of the cutest scenes in the MV. He first appears holding a red umbrella to keep those pesky, falling cherry blossoms off his pristine idol hair and clothes. The umbrella ends up flying away and he makes do by drawing one with chalk on one of the many white houses on the set.

The umbrella, we learn, flies to a tree near IU, where she’s having a go at catching cherry blossoms and then blowing them away. Later, she holds onto an ice cream cone that is shoved away, and which ends up flying into the hands of Kyle. He has fewer lines than Myung-han but vocally, he makes do with what he’s got. However, I did find most of his facial expressions forced. There was no naturalness in them and it made it seem as if he had practiced in front of the mirror for hours.

We’re introduced to the two rappers while they’re driving a car. Yong-jun takes the wheel and his pretty face and serviceable rap makes me believe that he and Myung-han are both traditionally trained idols put into this group. They both have natural expressions and their faces are very idol-like. In the mean time, Alex is the last of four members to make an appearance. His rapping style is smoother in its flow. 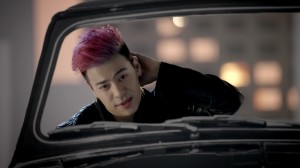 It ends with the members of High4 and IU coming together for the last chorus, dancing a very, very simple dance. The moves suit the melody and feel of the song and it’s easy to see that the High4 members are capable of more. It’s easy to presume that the routine was added in as some sort of last musing, to tone down and give the simple scene a little bit more cuteness in adherence to IU’s dance part – dancing still isn’t exactly something she’s known for.

The lyrics are, without a doubt, made for the spring. It’s the season in which we often witness a deluge of comebacks from idols, balladeers and the in-between, all singing songs of love and cherry blossoms. Spring is all about the blooming of flowers and the returning of hibernating wildlife; it’s also become synonymous with the start of new love. In K-pop, spring is when the songs all turn to love and starting anew.

As the title suggests, this song is not about spring, love or cherry blossoms – the three most common subject matters of songs this season. Instead, it’s about a person — not in a relationship — who receives a sudden revelation when he/she looks around and sees that everyone is part of a couple. This person has no one to hold hands with and frankly, the love songs are a little bit too much for them.

But people keep asking, why are you the only one still like this?

Then I looked around and realized it was spring

I have no one to hold hands with and walk

So this sweet spring wind is just too much

Everyone but me is in love, singing spring songs

Flowers bloom and sway before my eyes

But I want to hear something else

Something to sweep away everything

Not spring, love or cherry blossoms

The song has many positives. It showcases the voices of the members in their best lights. The two main vocalists have vocal timbres distinct from each other. Despite the song’s mid-tempo feel, the two rappers also have their time to shine in their rap verses. It makes one wonder what the next step will be for the members, what their next release will sound like. Will it continue on in the light tone we find in “Not Spring, Love or Cherry Blossoms” or will we have something a bit more up-tempo? A quick search on YouTube confirms that while this debut effort is what one would expect from a non-mainstream group, the quartet has been made with mainstream success in mind. There are two capable vocalists and two rappers who aren’t that bad, and all four of them can bust moves.

This makes one wonder how the quartet will be when it stands on its own. Featuring no top-billed artists, will they continue with a sound similar to “Not Spring, Love or Cherry Blossoms,” or will they go down the more traditional idol route and deliver some slick choreography? Either way, there is potential in High4, and if handled properly, they could go a long way. 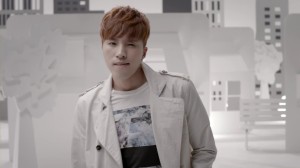 Amongst all the positives, there is one negative: the fact that the song is more of a duet with IU. While this is so, one can’t blame the company. With IU featuring so prominently in the track, the group is opened to a whole new audience most debut acts from small companies wouldn’t have. Apart from IU’s own fan base, High4 is exposed to casual listeners who want to see what IU is up to.

Overall, this is a good, solid debut that presents the vocal capabilities of the boys. The audience is eased into the style of High4, before the entrance of flashier concepts — the defaults that we’re all familiar with. They may not gain instant success but if handled correctly, I definitely see them having a following similar to that of Okdal. “Not Spring, Love or Cherry Blossoms” earns them a 4/5. What do you think?