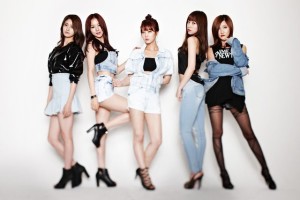 Following the monumental viral rise of “Up&Down,” EXID has returned with not just a new song, but a new mini. Ah Yeah is their first mini since 2012’s Hippity Hop, and has the daunting task of proving if EXID has more in them then just one hit. Ah Yeah does; but honestly, the album took a very different direction than what many would expect based on “Up&Down” and “Ah Yeah.”

The mini dives right into things with title track “Ah Yeah.” This is a damn catchy song, full of fire and energy. The backbone of “Ah Yeah” is killer use of saxophones on the verses before exploding into full bombast with the chorus. The back and forth between Hani and LE are insanely clever and addictive, with the instrumentation switching from sweet to pissed right along with them. Sadly, while Junghwa, Hyerin and Solji all sound great, “Ah Yeah” is basically The LE And Hani Show.

Still, that is a forgivable sin in a song devoted to voicing the frustrations women have when guys just won’t take a hint. EXID is pissed at how women are expected to be nice to the asshat who thinks that being male means he has a right to whomever he wants. That guy– personified by the voice asking “Where do you live? Do you live alone?”– is one every woman has run into, and the ladies of EXID are clearly two seconds from saying what we all think but don’t say for fear of retaliation: fuck the hell off, you creepy bastard. 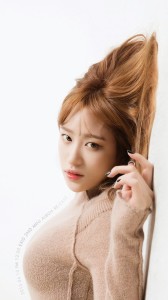 “Thrilling” is a slower, mid-tempo song, and really sets the tone for the rest of the album. The opening is eerily reminiscent of their earlier single “Every Night.” “Thrilling” is the stark examination of a failing relationship; it carries over to the bare-bones production, that allows the emotion of Solji and Junghwa to resonate with greater clarity. The lyrics tell the story of a disintegrating relationship where both are miserable, but neither is willing to leave. The mess is emphasized by the song structure: Hani and Hyerin start sedate, then get angry under LE, before solidifying into resolve to end this, only to falter between the risk of leaving and the risk of staying.

“Pat Pat” follows the mid-tempo vibe of “Thrilling,” but is sweet and gentle where the other was tired and defeated. “Pat Pat” is a love song, but one not seen often in K-pop. The ladies of EXID are in relationships, happy ones, but the life of idols complicates things. They can’t always pick up or even text back, their lives are a hectic mess, but they clearly love their boys and want to be able to lean on them for support. Yet, for how sweet this is, there is a serious undercurrent of insecurity. Always present is the fear that their boo will tire of the insanity and leave for a more normal relationship, so they’re making the effort to spend as much time together before that happens.

Continuing the mood whiplash is the slightly peppier “Without U”. It has an amazing bass line that drives the song forward and gives “Without U” the edge of exasperation that really makes it work. Most break-up songs tend to lament the relationship’s loss. EXID, not so much. They’re more than okay without their ex, they’re freaking good. The guy cheated, left, and then had the gall to come crawling back. Is it any wonder “Without U” just screams I am so done with this shit?

“1M” is a great standout on Ah Yeah for being the only pure ballad. It is nothing but a piano and pain, and it is delicious. Finally, Solji gets to showboat properly! To be fair, though, everyone sounds gorgeous here. “1M” spins the tale of a painfully complicated relationship, being just friends, sometimes taking steps towards more, other times the distance becoming an ocean. They know it’s not healthy and they need to move on, but isn’t the base of a relationship wanting to be by someone’s side always, which is what they have here? Knowing that something isn’t good for you doesn’t lessen the desire for it, after all.

Following the tearjerking “1M” is two prior releases. The first is obviously “Up&Down”. Let’s face it, releasing a mini without their monster digital single would have been the second-dumbest idea in the history of K-pop. And as much as re-releasing digital songs like this usually pisses me off, I don’t mind it here. For one, “Up&Down” is still a really good song. For another, it fits with Ah Yeah‘s themes of complicated, messy relationships rather than sticking out like a sore thumb. 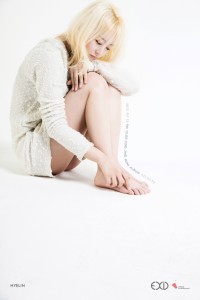 The final track on Ah Yeah is “Every Night Version 2,” a re-arranging of their previous single “Every Night.” Like “Up&Down” “Every Night” really fits on Ah Yeah. It’s slow and stripped down, with no illusion of what it is. Similarly, EXID is just as aware that they’re nothing but some guy’s booty call and they need to get out of this mess. I confess to like version 2 of “Every Night” more than the original. LE’s second rap has been replaced with a new verse for Hani and Solji with greater maturity. In the original, they accepted their inability to move on, but in this version, EXID takes steps to get out of this toxic mess, but it’s clearly hard.

Overall, Ah Yeah  is much slower than its singles would lead one to expect, but that doesn’t stop it from being a solid release. I love the theme of complicated relationships. Most love songs are simple and straightforward– I like you, we’re in love, this breakup ended my life. Ah Yeah is full of messy tales of fear of breaking up and the inability to act on what you know is best. The most straightforward is “Pat Pat,” but even that has the underlying fear of being torn apart by stress amid the happiness. Ah Yeah‘s complications allow it to ring true and resonate with listeners.