EXID Goes From Down to Up with "Up & Down" 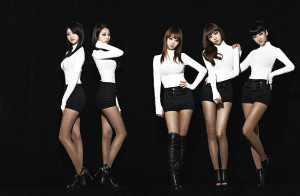 Unless you’ve been detached from K-pop buzz the past few months, you must have at least heard of EXID and their popular hit  “Up & Down.” Four months after the song was released, and around three months since their promotions had ended, EXID is back to performing “Up & Down” on various music shows and making television appearances. With the group’s success being one of the most unexpected reversals of last year, it seems to be an appropriate time to provide a rundown of their whole rise in popularity.

EXID is a five member girl group under Yedang Entertainment, consisting of members Solji, LE, Hani, Hyerin and Junghwa. They debuted in February 2012 with “Whoz That Girl,” and their original lineup actually consisted of six members, but two months later former members Dami and Yuzi (now known as Hyeyeon and Uji) left to focus on their studies, while Haeryung departed to pursue a career in acting. The three have since then debuted in a new group Bestie. Meanwhile, Solji and Hyerin were added to EXID, forming the current lineup of the group.

Their discography up to date is composed of three digital singles and one EP album. Since 2012, their title tracks have been fairly solid (and very catchy), and the first three songs they released in their debut year – “Whoz That Girl,” “I Feel Good” and “Every Night” – all charted impressively for a rookie group, reaching peak positions of 36, 56, and 43 respectively on the Gaon music chart. However, they never really caught the public’s eye until recently, possibly because of their disappearance just as they were gaining popularity – “Up & Down” followed their last group release by a full two years. Of course, they weren’t completely inactive during that time, as Solji and Hani formed a subunit, Dasoni, and debuted with the single “Goodbye” in 2013. On the whole, though, the sparse comebacks may not have been the best plan considering they were quite new and therefore easily forgotten.

“Up & Down” was ironically EXID’s worst charting single pre-fancam, dropping off the top 100 of Gaon within a week. Its amazing revival only began when YouTube user Pharkil, whose channel is dedicated to fancams of girl group performances, uploaded a video on October 9 of Hani performing the event version of “Up & Down.”

The fancam’s going viral was a legendary event. Although it was published in October, its views experienced a spike in mid-November, although how it all started is beyond me. The video showcases a Hani-focused performance of “Up & Down” and has well over 5 million views up to date – the exact number is even slightly higher than the views on their official MV! 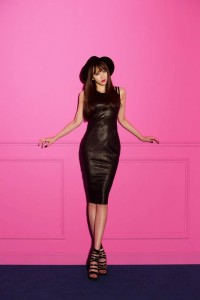 What caught the public’s attention first about the fancam was likely Hani. She has a beautiful face and a nice body, highlighted in the video by her head tilt, which she jokingly said on Hashtag were the angles that made her face look best, and her hip thrusting movements, which were removed from the version of the dance usually performed on television. More impressive, though, are the events that followed. “Up & Down” began rapidly working its way back up the digital music charts, breaking into top 10 by the end of November. Since individual member popularity doesn’t always translate to musical success, the rise of “Up & Down” must have meant it also began to gain recognition for being a fun song.

By the end of 2014, EXID finally reached the number one position on several music charts. On December 18, “Up & Down” topped a chart for the first time on Mnet, while coming in second on Olleh Music and Genie, third on Melon and fourth on Bugs. These rankings have since then stayed relatively stable or, in some cases, improved. What’s more, after having been nominated on two out of four music shows in the first week of January 2015, the group achieved their first win – ever – on January 8 on M! Countdown. 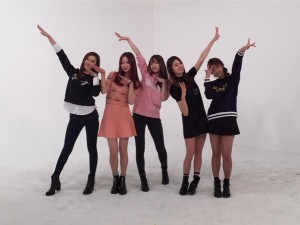 EXID as a group has also greatly received a boost in popularity after the track’s revival. Following the initial news about EXID’s digital feat, their company made the wise decision to put the girls back into promotion to keep the momentum going. This time around, EXID is clearly held in higher regard as “trends” of the entertainment industry, with their increased TV appearances and features for several artists. In terms of variety, the group has participated in shows such as Weekly Idol and Gag Concert, and Hani was even in talks for the female special of Real Men, although she was not a part of the final lineup. Meanwhile, on the music side, LE recently featured in The SeeYa’s “The Song of Love,” while Hani will appear in the music video of Mad Clown’s new song “Fire.”

Sometimes fame is all about that one stroke of luck – Hyeri‘s aegyo video that blew up is another classic example. However, after that luck has passed, whether or not the group can stay on the public’s radar is dependent on the appeal and talent of the group, the way they handle their newfound popularity and proper marketing. I’d say EXID is relatively well off now, with one member that has outstanding recognition (Hani), one strong vocalist (Solji) and one of the few female K-pop idols who is actually a good rapper (LE). That being said, the higher you go, the harder you fall. Now that eyes are turning on them, they have to be more careful under increased scrutiny in order to not lose their fame as quickly as they earned it. Hani’s already getting some criticism for a statement she made on a radio show about “betting on her mom,” and while the incident was most likely a slip-up and hasn’t really had a very large impact, it should serve as a warning for the EXID members to be more conscious of how costly their mistakes can be.

To end on a pleasant note, somehow EXID’s company got ahold of Pharkil and invited him to have a meal with EXID. The fancam recorder turned down the offer at the time because he felt pressured. However, at a recent event, Hani managed to spot Pharkil in the crowd (who was recording Hani again) and quietly waved to him while on stage. She also mouthed “thank you” to the lucky fan. With that, I leave you with the adorable video below!