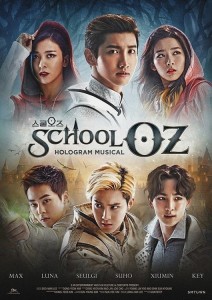 Yes, you read that correctly. The latest development in technology for the theatre industry, it seems, is putting on shows made up entirely of holograms.

They are being introduced to the medium through K-pop mega giant SM Entertainment, who will launch the world’s first ever hologram musical, School Oz, on January 14.

The musical production will star TVXQ‘s Changmin, F(x)‘sLuna, Red Velvet‘s Seulgi, Exo‘s Suho and Xiumin and Shinee‘s Key, as they take us on a mystical K-pop journey filled with magic and adventure, featuring hit songs by various SME artists — all through the comfort of high definition screen projectors.

The plot is based on The Wizard of Oz, however, of course, with a few K-pop suited twists. Set in the fantasy world of Oz, the 110-minute long story follows the search for Dorothy, played by Seulgi, who mysteriously goes missing the day before a grand competition that will determine the greatest knight in all of the land. Changmin will take on the role of Oscar the magician, whilst Luna will be playing Glinda the Good Witch. Key will be portraying the lively character David, and Suho and Xiumin will take on the roles of the young Hans and the loyal Aquila, respectively.

Check out the teaser below to get an inclination of how impressive the visuals are looking.

And just in case you needed any more reason to be excited the show will also feature special appearances from both Yoona and Leeteuk.

Plus, we will also get a bonus screening of SM’s first hologram concert Girl’s Story, starring both Minho and Yoona, on the same day, the teaser for which can be seen below.

SM is no stranger to the hologram concept as the company has previously collaborated with Universal Studios Japan, Osaka in 2013 to open a SMTown Hologram V-Theatre in the theme park, where fans can pay to watch ‘live’ SM artist performances via high quality holograms in order to attain the actual concert going experience. However, it looks like now they are trying to push this idea even further by taking it into musicals, facilitating the somewhat bizarre thought that the K-pop world could be in store for a hologram takeover.

The premiere screening of both performances will take place on January 14 at the SMTown Theatre, located in SM’s Coex Artium in Samsung-dong, Seoul. Tickets for the show go on sale on January 7 and can be purchased from the show’s official website.