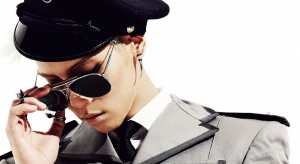 2015 seems to be getting off to one exciting start. First big release of the year is from Shinee‘s very own Kim Jonghyun. This is a long time in the making. SM saw fit to give Jonghyun every opportunity to flex his songwriting muscle, and he did so with the enthusiasm of a man driven mad with desire.

It was apparent very early on that Jonghyun had a gift for creating shockingly poetic lyrics. Starting from Shinee’s second EP, 2009’s Romeo, Jonghyun proved surprisingly adept at utilizing imagery and extended metaphor. “Juliette” was surprisingly apropos of the album. We follow our Romeo as he falls deeper and deeper for someone he’s seen from afar, someone who caught his eye almost instantly—much like our hapless Romeo in Shakespeare’s classic tragedy: “I follow your scent that embraces my body again. I can’t stop, so take all of my heart and my breath.”

In the song’s upbeat rhythm, composition that would define Shinee’s sound, there’s a hint of the obsessed and desperate in the lyrics. “Juliette” would be the first of many songs in which Jonghyun paints a picture of a man thirsting for romance.

The group’s second Korean album, Lucifer, was a turning point for the group. Musically and conceptually, Shinee was moving toward a more aggressive sound, music that was meant to steer them from the young rascals of Replay to virile young men meant to entice the swooning masses. With this shift in group tone, Jonghyun began to also write lyrics that hinted at something more, shall we say, emotional. Though track “Up & Down” is more of a playful track—a boy wondering why the one he has his eye set on is so hot and cold regarding her feelings for him—track “Obsession” is most definitely a young man on the verge of madness because of his lover’s desire to play with his heart:

My hands tremble more, I’ll lose my focus shortly,
why are my broken legs standing here?
I can’t even remember, I become scared,
where are you? Were you laughing until just now?

(Why) I’m hearing funny noises, have you left me?
You’re far away
(Why) Is it getting dim? These scars are like shackles

Curse me, curse me for letting go
My collapsed heart is screaming,
don’t throw me away, don’t leave me alone
I want you, I want you like crazy.

We begin to see the emotional twists and turns of our lyricist. The title “Obsession” fits. Jonghyun delivers lyrics that are raw, almost maddening. With each song penned, we begin to see the purity in his emotion, begin to understand that even if the experiences he speaks of aren’t necessarily his own, he harbors the emotion within himself like someone living out the heartache each lyric he pens seems to drip with.

With the maturation of Jonghyun’s lyrics, we were gifted music and lyrics that not only gave each Shinee album some complexity, but that also meshed perfectly together to deliver emotion so pure, so shockingly acute, fans felt each song to their core. Sherlock was a highly anticipated comeback that promised music a bit left of center—if the cover art and spoiler images were any indication. With track “Honesty” we get an acoustic love note to fans, Jonghyun giving his sincere thanks for all their support: “There is a rope between us. Something that can’t be explained, something so great. Our stories, memories keep connecting one by one, even today.”

Countering the organic simplicity of “Honesty,” track “Alarm Clock” allows us a deeper look at the crazed romantic inside Jonghyun. His dreams are haunted with the lingering touch of his true love, and he prays for the blare of an alarm clock to cease his sleepless torment:

Today, I am all drenched in sweat yet again
I wake up and I just can’t believe it oh (a cruel nightmare)
In the dream that repeats every night
Like a lie, you coldly leave me oh

The experimental three-part series Misconceptions of Us gave Jonghyun even more space to express his flair for the romantic. “Selene 6.23” portrayed our protagonist as someone begging desperately for just a glance, just a taste of the one his heart yearns for: “Look at my eyes, I whisper alone as I look at you from far away. Just smile for me once, I can endure it just by seeing your face. If you are standing at the end of my life, if I can get closer to you, I can throw away everything and run to you.”

We begin to see more of the soul of Jonghyun as Shinee’s discography progresses. His ability to tap fearlessly into his heart and reach for lyrics drenched in longing and uncorrupt desire would reach an astounding peak with their next mini-album with a song that many still find to be his most impactful to date.

Jonghyun’s understanding of emotion runs deep, giving him a particularly keen grasp on metaphor and an ability to tell stories fit for romance novels. Shinee’s fifth Korean mini-album Everybody produced one of K-pop’s most powerful R&B tracks in “Symptoms.” It’s drenched in heartache so thick it borders on obsession:

Jonghyun’s yearning lyric is perfectly supported by strong vocals from each member of the group and a throbbing croon driving the musical composition. The sound pulsates, the vocals combust, and the lyrics manifest feelings of such deep need one can’t help but become wrapped up in each moment.

It was only a matter of time before SM let Jonghyun loose on other artists. In the same year that he penned both “Selene 6.23” and “Symptoms,” he offered his talents to vocalist IU. With track “Gloomy Clock,” we get much more of the lyricist’s reflective side. Instead of letting the sadness continue to consume him, he revels in the fact that over time that pain will fade away. The lyric is simple, often repetitive; however, he uses the senses to paint a vivid emotional landscape, employing simple imagery to give the listener a tactile experience: “It’s raining, it’s raining, making things sticky, it keeps raining. I’m sleepy, I’m sleepy, I’m too lazy to do anything.”

With the release Base, fans will no doubt be gifted a glimpse into Jonghyun’s oftentimes obsessive mind. He manages to dig deep to find the purest form of love there is—one so unfettered it consumes anyone who comes near it. His ability to take the elemental and augment it to something far grander than one may think a pop song about love can be proves this young man may be K-pop’s biggest love fool.