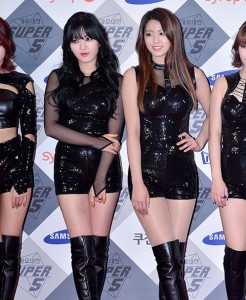 December was a busy month for fashion, and with so many music shows, award ceremonies, and music videos someone was bound to slip up. People like G-Dragon can make a fraying potato sack look avant garde, but most idols are at the mercy of their stylists and company overlords. So let’s take a reluctant look at the style stumbles of December.

First up is AOA whose members were clearly tricked into thinking they were going to a sexy vampire party. It’s an attempt at a sultry concept, but so much black and sparkly fake leather make their costumes look cheap. I wish their stylists had gone for something more interesting than just the standard black and tight=sexy. But perhaps the worst part is that they look absolutely miserable and uncomfortable. It was a struggle trying to find photos with anyone smiling. Fashion should make people feel confident and happy, not depressed! 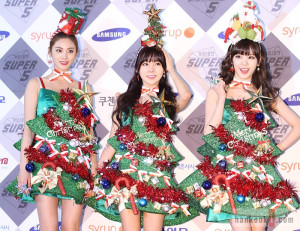 Which brings me to Orange Caramel. Now before anyone starts a keyboard assault against me, hear me out. Orange Caramel’s quirkiness and oddball fashion is always a breath of fresh air. The Christmas trees complete with garland and ornaments just scream fun! The hats are cute and unique, particularly the snowman. But no matter what style you’re going for, you have to make sure that it doesn’t overwhelm you. Instead of Orange Caramel wearing unique holiday dresses, the dresses wore them. Even beautiful Nana became a mannequin underneath all those bows! However, despite the holiday explosion they’re wearing, they at least look like they’re having so much fun! 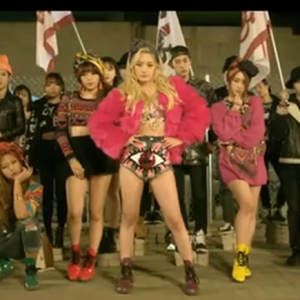 Next up, let’s take a look at Na-ri in Wa$$up‘s  music video “Shut Up U (시끄러워 U)“. I couldn’t believe my eyes when I saw that someone put her in that over-sized fuzzy pink coat. I wish I could turn a blind eye to her fashion statement, but I can’t. I just don’t see the point of wearing a winter coat with a skimpy summer outfit. It certainly is eye-catching, but it’s a little too “Look at me! Look at me!” for my taste. And it’s a little creepy that it’s always staring at me from every angle like the all-seeing eye of Mordor. But, hey, beauty is in the eye of the beholder. So here’s lookin’ at you, kid (all puns shamelessly intended).

But the girls weren’t the only ones who ticked off their stylists; the boys also had a tough month. From the more obscure realm of K-pop comes Atomic Kiz in a performance for “Wah/와”.

I appreciate the attempt to try a newer version of the suit and stand out. But the coats give the impression that they’re just renting their costumes and have to keep the protective plastic bags over them. It really just cheapens the overall look. It’s hard for just about anyone to make plastic look good, so why burden these underdogs with Matrix costume rejects? 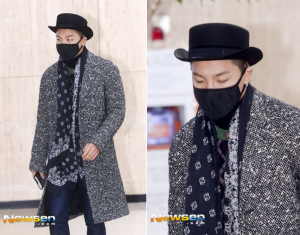 Continuing the catwalk of shame is Taeyang. I really hated having to put him in this list, but the fact is that I know he can do so much better! Maybe after so many shirtless music videos he’s forgotten how to properly dress his upper body. The result is he’s being eaten alive by endless yards of fabric. There are just too many patterns going on here, and this new go-to hat is really out of place. There are definitely ways to mix and match patterns, but more often than not it doesn’t work out well. I could be more understanding if he was sacrificing style for function, but there’s no way that scarf is keeping him warm in the frozen hell that is Korea in winter.

While scanning the music shows for examples of fashion missteps, I came across this performance of “Rilla Go” by DGNA:

I thought I was having deja vu until I realized that these were “updated” versions of the outfits in the November issue of worst of K-pop fashion. There’s bird man again, along with the zebra prints and fringe. I don’t mind strange or crazy looks, and I think these kinds of outfits could work if they were just edited a bit. But, more than that, this is supposed to be a group performance, and there is no cohesion. It looks like they picked a bunch of random people from different PC Bangs and cosplay conventions and threw them on stage.

December had some questionable style choices, but it’s a new month and a new year! I’m sure that 2015 will have its own memorable fashionistas. So what do you think readers? Any additions you’d like to make? Or perhaps you disagree?