Girls, bring it on

-GOT the Beat’s “Step Back”

Like pretty much every industry in the world, K-pop has a misogyny problem. Some might claim that K-pop has plenty of pain to go around, regardless of gender, and there’s a point to be made there: stalking, body shaming, and overwork affects male and female idols alike. But there’s no denying the outsized proportion of female idols who are hounded by so-called fans and dismissed by industry insiders. Girl groups are debuted less often, have short shelf lives, and more frequently are unceremoniously disbanded, to say nothing of the sexualization and patronizing treatment members are subjected to during their careers. And that’s just what happens in public, on variety shows and in press releases for the world to witness.

This all sounds pretty dire, but nothing stays the same forever, and things have been slowly but surely shifting in K-pop. Female artists have begun to be taken seriously not just commercially but artistically, especially with the rise of recognized singer-songwriters like IU, Sunmi, and (G)I-dle’s Sooyeon. Increasingly vocal fans are calling out toxic behavior from fellow fans, companies, and male celebrities. The international K-pop market, long boy-group dominated, has begun to welcome names like Itzy, Everglow, and of course Black Pink.

This progress, largely artist and fan-driven, has not gone unnoticed by K-pop companies. Girl power is now popular, and K-pop companies love nothing more than a trend they can jump on. But through companies’ faltering attempts to claim girl power for their own, they often end up accidentally baring their misogynistic practices for all to see. For example, YG Entertainment markets Black Pink as a tough girl crush group, but their lyrics, styling, and general lack of actual music tell a different story. JYP Entertainment launched teen crush sensation Itzy in 2019. Itzy are breaking ground with their unapologetic attitude and awe-inspiring dance routines. But why has Itzy’s recent shift in concept been to lovestruck femme fatales obsessed with a boy? Can’t JYP think of a better way for Itzy to grow up? And now SM Entertainment has thrown their hat in the ring with the most unfortunate girl power attempt yet: GOT the Beat.

When SM announced they would be launching Girls on Top (GOT), a rotational unit of some of the company’s best female performers, fans were ecstatic. After all, SM is home to an impressive number of top female idols: Aespa, Red Velvet, 5 members of SNSD, and the one and only BoA. That the name of the project is a reference to BoA’s 2005 girl power classic “Girls on Top” is a nice touch, especially given how instrumental BoA’s success was to the establishment of SM as a K-pop powerhouse. When the first lineup was announced under the moniker GOT the Beat, excitement grew to see BoA, SNSD’s Taeyeon and Hyoyeon, Red Velvet’s Seulgi and Wendy, and Aespa’s Karina and Winter take the stage together.

GOT the Beat’s concept was a bit unnecessarily confusing, what with all the unit names, but that is pretty much to be expected from the company that invented NCT. Other than that, GOT the Beat seemed incredibly promising. While some criticized the group’s rotational setup, this was objectively a smart move on SM’s part. As SM has discovered with their male supergroup SuperM, having a set lineup of members from different groups can make comebacks for the supergroup all but impossible to organize: SuperM are likely in for a long hiatus as members cycle in and out of the military and their regular group and solo duties. GOT’s structure allows for much more flexibility, and will make it possible for more of SM’s female idols to have their chance in the collaborative spotlight.

GOT the Beat made their stage debut at SM’s massively successful SMTown Live 2022 virtual concert. It was a fittingly prestigious place for a premiere and SM nicely built up the unveiling of GOT the Beat’s debut single “Step Back”, lining up stages from all the members individually or in their groups before the big reveal. But as soon as the song “Step Back” started to play, it became terribly clear that SM has absolutely no grasp on what girl power is:

Take your hands off of mine, step back, step back

It won’t be enough even if you’re born again, step back, step back

They become lonelier as they drink more

After gathering popular and talented female idols from across their company, SM thought that the best thing GOT the Beat could sing would be about how their man is “The one that got me next level”. Yes, SM called on its big brain power and decided that GOT the Beat should tell other women to “Step Back” because they were getting too close to their man. To reiterate one last time, because it is so truly unbelievable, SM decided that their girl power group should sing a song about how they are so much better than this other, unworthy woman and that woman better not come near their very special man. What a disaster.

In the aftermath of the release of “Step Back”, producer and songwriter Ryan Jhun has garnered a lot of attention (and blame) for his involvement in the song. Jhun doesn’t exactly have a sterling reputation when it comes to feminism: he has penned songs for groups such as Oh My Girl and Loona, but in September 2021 had to publicly apologize for referring to female idols using a vulgar and derogative term. But while Jhun’s involvement in GOT is worth questioning, it’s unrealistic to pin the fault on a single person. A high-profile release like “Step Back” would have gone past hundreds of eyes at SM, including whatever genius decided to hire someone like Ryan Jhun for this project. That a blatantly problematic song like “Step Back” ever made it into the light of day speaks to a deeply disconnected and male-dominated atmosphere at SM, and that’s the truly scary part.

What makes “Step Back” even more disappointing is that the unit itself is quite impressive. Despite unmemorable choreography and a trainwreck of a track, GOT the Beat’s performance is charismatic and enjoyable. Even though there is a fourteen-year age gap between the unit’s oldest and youngest members, GOT the Beat have solid onstage chemistry and come across as a cohesive group.

Meanwhile, the song does employ more autotune than is strictly necessary, but its melody is catchy, especially in combination with its unique, minimalistic production. And of course, GOT the Beat absolutely slays in the vocal department, with Wendy, Taeyeon, and BoA doing particularly excellent work. All these positive elements make you wish “Step Back” didn’t have to be judged primarily as a giant swing and miss. But that’s exactly what it is, and it’s important SM gets called out on it.

It’s also worth noting that despite the hype leading up to the release of “Step Back”, SM’s promotions for the song following the SMTown concert have been sorely lacking. The company released a single performance video two days before the actual digital release of “Step Back”, strange timing that didn’t help to generate excitement for the song’s drop. The song appears to be on track to receive no MV, no b-sides, and no physical album. Compare this to SM’s male supergroup SuperM, which the company showered with promotions and merchandise, and the contrast is stark.

SM would likely protest that unlike SuperM, GOT the Beat is a temporary group, but that shouldn’t let them off the hook for their blatant favoritism. It’s also possible that the lack of promotion is a result of the less than stellar reception the first performance of “Step Back” received. Indeed, if there is a bright spot in this story, it is how fans and critics alike are stepping up to criticize the absurdity of SM’s flub. It’s becoming clearer and clearer that any progress that is to be made in K-pop on gender equality will have to be driven by artists, fans, and critics, because companies are likely a lost cause. Seeing a wave of voices demanding more from K-pop and more for respected female artists is heartening. And seeing SM respond to this backlash by potentially trying to bury GOT the Beat through lack of promotions, rather than taking responsibility for their company mistake, is distressingly predictable.

Despite the horrendous misfire that “Step Back” is, GOT the Beat as a unit have proven their enormous performance potential. If SM chooses to unceremoniously dump another girl group (f(x), you are not forgotten) to cover up their mess, the company will only further prove how out of touch they are. The right and smart thing to do would be to go back to the drawing board and come up with something worthy of these female icons. There is still a huge hunger for genuine girl power, and goodness knows the members of GOT the Beat are capable of delivering it. But for now, they’ve been sabotaged by their own company and it’s such a shame.

The final line of “Step Back” is “He’s sick and tired everyday” in reference to the bad woman making the good boy so very sad. That “Step Back” closes still focused on a man exemplifies the song’s failings. The circumstances around “Step Back” similarly demonstrate the key factors of misogyny that plague K-pop: Clueless companies, misogynistic songwriting, poor promotion for female artists, scapegoating of girl groups, prioritizing of male artists, and an overwhelming number of people in power that mistreat female idols without a second thought. The beloved boyfriend of “Step Back” might be sick and tired everyday of that bad flirty girl, but the fans who look up to female K-pop artists are sick and tired everyday of seeing them disrespected. As the vocal backlash to “Step Back” proves, that exhaustion is turning to anger and action. The only thing that needs to step back is the patriarchy. 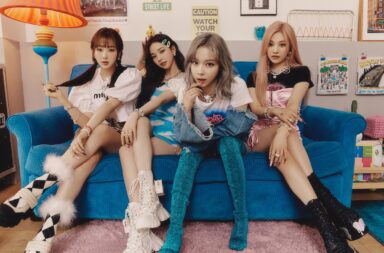