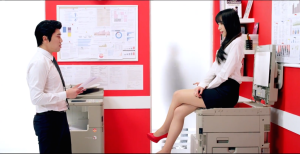 We all know the story of EXID‘s surprising rise to fame that was made up of a fancam, a catchy song, pelvic thrusts and, well, Hani. EXID’s underdog journey from relative K-pop obscurity to number one was perhaps one of the greatest success stories of 2014. So, when Yedang  announced EXID’s anticipated spring comeback back in February fans, netizens almost immediately began to speculate if EXID could ever surpass the success of their breakthrough hit “Up & Down.”

After the wild ride of late-blossomed fame, EXID has finally returned with a new single “Ah Yeah” and a mini album of the same name. Produced by Shinsadong Tiger and co-written and produced by member LE, the new single and accompanying MV cheekily poke fun at not only EXID themselves, but also provide social commentary that packs a surprising punch.

First things first: yes, the release is eerily reminiscent of “Up & Down.” From the saxophone to the dance moves to the looped chant-y hook, it’s all overwhelmingly familiar. Is that automatically a bad thing? Not necessarily. I would argue that Sinsadong Tiger and EXID are very much aware of what they are doing, and they are not simply attempting to mimic the success of “Up and Down.” Given the fact that EXID had such a small, but diverse, sampling of digital singles prior to the success of “Up & Down,” it makes sense that EXID, Shinsadong Tiger and Yedang would choose a track that was in the same vein as the one that earned them public recognition.

With the similarities in mind, “Ah Yeah” is a cleverly produced track; it retains enough of what made “Up and Down” work but avoids becoming “Up and Down 2.0” through subtle but noticeable production variations, making the song familiar but still interesting. At first listen, the track feels odd with its radical shifts between sultry, sweet vocals and aggressive raps that are paired with an equally aggressive baseline. The ambient pre-chorus is also coupled with a powerfully delivered chorus. All these factors loop back into the familiar refrain of the saxophone and chants of “Ah Yeah,” which make for a stellar hook.

The track’s production is only further heightened by its music video. One of the things I adore about EXID is their intelligent music videos. Even before the fancam fame, I had been a fan of their girl power concepts, from the party of “I Feel Good” to the chili pepper poisoning of “Every Night.” With the “Ah Yeah” MV teaser showing abundant censored mosaics, I was wary of exactly what EXID was going for with this MV. But, much like “Up & Down,” which was littered with playful innuendo, “Ah Yeah” turned out to be a smart blend of sexy and playful — paired with dashes of social commentary — that once again ended with the ladies of EXID on top.

Both vocally and visually, the verses play off of a Jekyll and Hyde type of tale in which Hani plays coy, and LE unleashes an honest and aggressive critique of the stumbling idiot in front of her. Between the singer and the rapper, we are presented an image of how women are often perceived (docile, sweet, almost robotic) and the reality of their inner thoughts. This play hints at a more serious social critique of some sexual double standards and expectations of female behavior when being hit on by a man.

Why can’t you get it?
I don’t know why I’m telling you this

You softly smile and keep pestering me
Treating me like an other girl
Man don’t do that
I don’t wanna answer those kinds of questions, no way

Junghwa takes over as the track segues into the more ambient sounding pre-chorus. For her scenes, she appears in some sort of web broadcast that is also surrounded by censor mosaics, looking like a cam girl. Like LE and Hani, she is annoyed with the man barraging her with questions. Though she smiles cutely for the camera, her lines are anything but sweet and flirty; instead, she asks if he can take a hint:

How about you pay attention and look?
Everyone but you can see this signal

For the chorus, the ladies are paying a sort of censored homage to the “Up and Down” dance while Solji and Hyerin manage to make the most of their limited lines with some seriously strong vocals and equally aggressive lyrics:

Following the chorus, the looped chant of “Ah Yeah” can be understood as a disinterested, non-committal response to the series of invasive questions the ladies are being asked, such as “Where do you live? Do you live alone?” These are the kinds of questions that would make anyone uncomfortable, but, unfortunately, women often find themselves on the receiving end of them.

So, what are the censorship bubbles and webcams all about? South Korea’s censorship laws are no secret, and EXID pokes fun at themselves by censoring their own pelvises, much like the KCSC forced them to do with their dance for “Up and Down.” When the mosaics go away, the dance move shifts its focus to the legs and the bottom caption of the frame changes from “19+” to “General Audiences” in Hangul. The overhead banner similarly reads ‘Good Enough.’

The ladies of EXID are essentially doing the exact same dance as “Up and Down” throughout the whole video — they even do Hani’s signature head tilt and the famous booty wiggle. The only difference in the uncensored final reveal is that they focus on the movement of their legs as opposed to their pelvises and somehow that makes it family friendly. It raises the question of what gets a pass and what gets censored in the media — and most importantly, why do girl groups tend to be on the receiving end of censoring while male groups draw attention to their groins on the regular?

When the other censorship bubbles in the MV are removed, they reveal equally non-offensive material, such as puppies and TEFL advertisements. In the end, the pixelated censor patches were censoring nothing of consequence. Which is exactly the point EXID’s getting at. The ladies then break out into wide grins and give one final merong before the MV concludes. This playful use of censorship bubbles leads us to question if content — like the “Up & Down” dance — is censored because of its sexual nature or because of the fact that a woman is doing it.

After several watches, it seems every little detail of the MV serves a cheeky yet critical purpose, leading viewers on an Easter egg hunt. The video has so many little touches, such as the “Nude” book on the bookshelf in the copy room, the click of the “ON AIR” light, the thumbnail link to Solji’s Mask King performance, even the banners on the mannequins that read ‘NO.’ All these elements continue to play on the relationship between female sexuality and censorship. 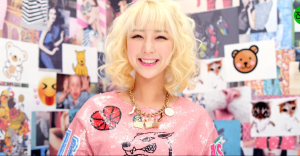 At its core, the “Ah Yeah” MV plays with the idea of expectations: not only our expectations of EXID in their follow-up, but also cultural expectations of women and the perverted expectations a simple censor bubble can provoke. EXID makes use of the way images of women are consumed in the media — through webcams, music videos, the news — and use satire to re-appropriate them.

“Ah Yeah” is a stand-out release. The ladies of EXID know what you’re expecting, and they’re gonna give it to you, but with their own twist. Women, and girl groups in general, are receiving a lot of male attention — and attempts at control — through invasive questions, the male gaze and even media censorship. But the ladies of EXID get the last laugh as they reclaim not only their dance that had been censored but their own voices. While the song itself isn’t excessively impressive, the whole package of the release more than makes up for the track’s weaknesses. I, for one, can’t wait for the “Up and Down” / “Ah Yeah” mash-up that is sure to be making the rounds soon.

Readers, what details in the MV caught your attention? What do you think of “Ah Yeah” as a follow up to “Up and Down”?