EXID Spices It Up with "Every Night"

EXID returns with single “Every Night,” a rearrangement of “Call,” which was on their first mini-album, Hippity Hop. Hailing from AB Entertainment under the eye of Shinsadong Tiger, the group debuted with high expectations that were quickly disappointed. Prior to releasing their mini-album, the group went through some member changes, which boosted the group’s vocals but did not change up the image.

“Every Night” takes a different direction from the bright ’80s vibe the group had beforehand.

EXID has some serious grudges against a man, going as far as to utilize tools of chemistry and the kitchen to create a bright-red mixture. From the lyrics, it seems that this revenge scheme is a final event meant to cut off relations with the man. As insinuated, there was a previous relationship between the pair, but the woman was kept out of the man’s normal life, a la a mistress or irritating family member. He’d only call her up when he was interested. The music video portrays a continuation of the lyrics, the response the woman has to the man’s next phone call, which also shows greater resolution on the part of the woman. The weapon of choice of the ladies is red chili pepper in exorbitant amounts, converted into a liquid form to induce sneezes at the perfect moment. What is unclear, however, is what else is in this mixture: in scenes such as when the girls are wearing gas masks, the party-goers seem to be unconscious, potentially dead. 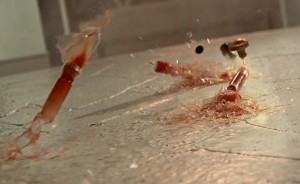 No matter the end result, the girls should be satisfied by the shower of spit the man in question received. And speaking of that scene, it was so carefully done, with the care taken to show the liquid leaving the women’s mouths with such force that I can only guess that it was done for comedic effect. However entertaining and unexpected that scene was, it did detract from the entire vibe of the music video. Strong, confident women enter a gathering with suspicious vials of red fluid only to reveal that they’re made from chili peppers to fulfill the objective of mass sneezing? It’s anticlimactic.

This music video is a wonderful simplification from the bright colors that the group has previously gone for. Here, the color palette is very muted; there are plenty of grays and unsaturated colors. The one shade that stands out is red: the suitcase, the liquid preparation, the lips, and of course, the chili peppers. It’s a powerful shade to use as red can signify many things: power, danger, intensity, strength, and bravery. The color in this context emphasizes the strength that these women have to carry out their plans (the lipstick) and the danger of the liquid created (the pepper concoction). The scenes of actually creating the red solution are intriguing to watch, from the movement in a spiral to the gentle drip of red drops to the slow-motion blending. In conjunction with darker clothing, the red is highlighted even more, striking the viewer as a key color and drawing attention to it whenever it’s present.

The choreography was similarly striking with its measured movements and hip sways. The moves match the melody in an almost hypnotic fashion, helping them to convey sensuality without losing sophistication. Their clothing during the dance scenes — white tops, high-waisted shorts, black heels — also help by keeping it simple but form-fitting to let those moves shine. 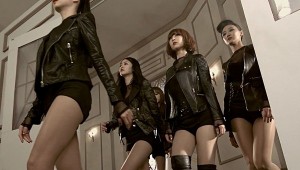 While the black bras initially look like a fashion mishap, their revealing nature seems to add to the sensuality of the dance, if anything because of the constant reminder of what’s underneath. The darker clothing and leather jackets establish the women as femme fatales, geared up to complete their mission.

This rearrangement of the song takes out some of the sounds that made “Call” seem fitting for a mellow ’80s disco night. The music is less chaotic, and the introduction of acoustic guitar in some areas is appreciated. This type of music also allows the vocals to shine more, in particular those of main vocalist Sol-ji and main rapper LE. The little touches, such as the ringing on the phone, are light enough to not interfere with the music, but they are still heard and they make sense in the given context. In addition, the lyrics were rewritten. Most of the lines are the same, but there are still differences that fit the desired plot and arrangement better — for comparison, here are lyrics to “Call.” It’s impressive and pleasing that LE had a part in the lyrics and music, as she has in previous works of EXID as well. The overall effect of the changes make a song that’s easier on the ears, especially rhythmically soothing, and is, for me, a better listen.

This music video for “Every Night” is really quite well done. The video quality is excellent and it’s apparent that thought was put into execution of the video. The plot was intriguing and it played well with the idea of creating a poison. What those other women in the room did to deserve such awful screenshots of projectile sneezing, I don’t know, but it added an unexpected comedic element that did not fit the sophistication and drive that the women had. It’s good that the ending wasn’t predictable, yet it reached a bit too far. Other characteristics of the music video worked well and matched with the song, which also made improvements, allowing me to award the video a 4.2/5. This release really showcases the vocal potential of the group, moving them up some ranks in my book of 2012 rookies. They’ve made a welcome change from their early “Whoz That Girl” days, and hopefully they’ll only get better.