EXID Returns with “Up and Down”

It has been a hot minute since EXID have promoted together. The group underwent many changes in their earlier days, but after their last full group promotions in July 2012 with the song “Every Night,” many folks thought they would build on the momentum of that track.

However, since then, they have only had a few OST tracks, features, and a not-so-successful sub-unit outing. The five ladies have also moved entertainment companies and now are being managed under Yedang Entertainment.

Not to be confused with their Incarnation of Money OST track of the same name, “Up and Down” brings in a prominent saxophone hook to pair with a quirky, sexy video.

The song is a hip-hop/pop number designed to catch your ear with the saxophone instrumental and the repetitive chorus. It attempts to simulate the rise and fall of love, and at times, it does stand out for a sometimes erratic production that changes beats between the verses, rap, and chorus. “Up and Down” is anchored by the saxophone instrumental, but the chorus feels misplaced as the beat shifts completely from the rap verses. The track does eventually come together with the various beats of the song becoming intertwined at the end. The lyrics mime the shifting tone of the track with the song expressing the feelings of a roller coaster relationship between two people. 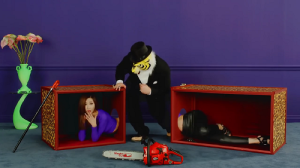 The MV is full of color and innuendo. The first few shots involve fruit, fish, and a Barbie doll but curiously show them cut up and paired in strange combinations. There is an avocado paired with a Barbie head as well as a fish tail paired with the top half of a Barbie. These are framed by feline prints, making them a jarring image to dissect. The feline prints tie back to the feline-mask-wearing magician who is performing tricks for combining different objects together.

EXID’s prior videos are not afraid of pushing sexuality, and this one is no different. The topic at hand is the subtle objectification of the female body. The girls are split in half at times, and the MV takes this idea of conjoining disparate objects and body parts to produce odd shapes and connections that aren’t quite fitting with the natural state of things. The viewer is constantly seeing the parts, and it pushes how our brains are conditioned to assume the whole from the part. This statement is also paired with another prop that implies sexual innuendo, balloons, to show how we see symbols from something otherwise unrelated. The balloons are a smart if not overused prop idea that can also represent the up and down nature of the relationship as it becomes deflated and bent into different shapes throughout the course of the video.

The plot does take a turn for the deadlier as the girls plot the murder of the feline magician. They once again use poison (a thematic trend in their MVs?) and eventually cause the demise of the magician. It is interesting that the magician seems capable of putting the girls back together but doesn’t attempt to put the parts back as a whole. It could be a sort of critique about the animalistic male gaze. That’s what I find intriguing about the MV — that the ladies are deconstructed as parts and at the mercy of this magician. They are subjected to this control but can only overcome it by dictating their fate in a violent manner, wresting the way they choose to be depicted. 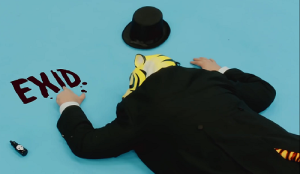 The whole framed element of some shots was another great aspect of this video. It was a voyeuristic look at the girls and the different props. They are placed between different boxes, and the viewer becomes fully aware that this is meant to be surreal rather than an imitation of life. The girls themselves become the objects subjected to the gaze of the audience. It puts into perspective the role of the viewer by placing meaning on what they see.

Overall, this is a great song and MV from the quintet. “Up and Down” is disjointed at times, but the song becomes more cohesive at the end. Also, the MV brings up an intriguing dialogue about the objectification of body parts and how the viewer does not separate art from the representation at hand. It is colorful, quirky, and catchy. Definitely great to have EXID back, and this MV and song is a nice foray back into the K-pop scene.