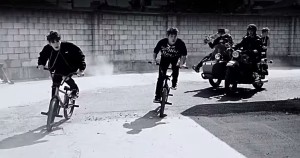 Starship Entertainment‘s newest boy band, Monsta X, is back with their second mini-album Rush and their second MV of the same name. The sound and visuals of this MV definitely follow the style laid down for Monsta X in their first release “Trespass.”

The groovy hip hop beat of the song and cheerful masculinity portrayed by the members pick up where “Trespass” left off, giving the boys a bit more of a neighborhood feel this time around. Despite their attempt to play high schoolers, the lyrics are much more fitting when you remember these boys are actually in their twenties, a bit older than most new K-pop groups.

The general premise of the song is calling for an attractive girl to say yes and start a relationship with the singer. The chorus line repeats, “Rush to me, like it’s raining. Rush to me, they’re boring.” The rest of the lyrics are nothing new: well-phrased yet generic and sexist. They repeatedly describe their object of affection as an ‘iron case,’ something they need to break through to win her.

I got a phone call. How many numbers are stored in your iron phone?

Make room for the fellas to put down their empty dishes.

It’s no fun, no touching. You’re all bland, there’s no taste.

I’ll season you, get ready. If you’re scared, get lost.

Now go tattle to your mother.

There’s so much going wrong with this verse. They’re accusing her of being bland because she doesn’t want to ‘have fun’ with them. And they’re asking her to fill their empty dishes? Are we supposed to take that literally or metaphorically? Either way, whether they’re asking her to cook for them or fulfill them emotionally, it’s offensive. If we take this literally, the song is leaning on the sexist, traditional gender role of women keeping the kitchen and the house; on the other hand, this could insinuate that the woman should be responsible for the man’s needs — emotionally or physically. Frankly, neither of these stereotypes is something that I enjoy listening to in a pop song. 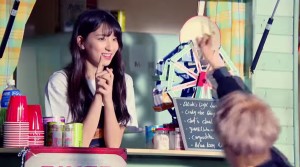 The chorus line of “don’t think about it, go the way your heart leads” could be romantic in another song, but not when coupled with “you need a thousand tries, these boys don’t know that.” Suddenly, instead of the man pleading with his love to follow her heart, he’s boasting that he will be able to wear her down enough so she’ll finally say yes. It is never okay to push someone when they’ve already turned you down, and saying ‘oh, it’s what your heart really means’ does not actually mean the woman has any reason to eventually say yes. This is borderline predatory.

Rush to me, let the other guys burn in envy. There won’t be time to be bored.

The problematic nature of this MV continues in the plot of the video itself. A group of young guys work at and hang around a neighborhood gas station, where an attractive young lady decides to set up a food stand business. She flirts with them when they buy drinks, they stare at her and show off. One night they discover her food truck has been vandalized, and she’s gone missing! Of course, now they must save her from whatever horrible dangers have befallen her, which they do, and ride their motorcycle off into the sunset together.

The first half of the video is much more light-hearted, taking place in the daytime, with the guys watching TV and goofing off together. Their love interest is introduced, and almost immediately we switch into gangster mode when the guys have to track her down. It’s now night, their outfits are mostly all black, and one of them has traded his sweatshirt in for a revealing tank top for some reason.

The acting shifts from cute to masculine, and we see a brief fight scene between the Monsta X men and the group of predatory guys who have abducted their girl. However, that poor woman just goes from being surrounded by one large group of men to another, and despite clearly not enjoying the first group, she doesn’t look very happy about ‘being saved’ either. The character of the girl in the video is very non-existent, and when seen alongside the lyrics, she is a traditional stereotype of a woman pandering to and obeying men and completely unable to stand up for herself.

I would have enjoyed the video much more if they’d kept up the style in the first half and tried to resolve the plot through a more ordinary relationship snafu. How many times has anyone’s crush been abducted by gangsters, really? 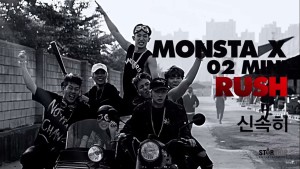 Overall, both the video and lyrics were quite predictable and sexist, which disappoints me, especially when you consider that, ignoring the lyrics and MV plot, the “Rush” MV is actually quite fun and well put together. The video is well filmed, with the switch between the bright beginning and darker end following a shift in the sound of the song.

The song itself is also quite catchy. “Trespass” was a song that easily got stuck in your head, but “Rush,” while still having a repetitive pop music nature, is more musically enjoyable. The upbeat background track matches the cheers and whoops scattered throughout the track to give it a young feel. It is smoothly produced, and the guys do a splendid job with their respective parts, particularly when considering the fact that this is only their second album. It all comes together to create a fun and danceable atmosphere.

However, the choreography barely appears, with the focus instead on the impressively predictable plot. What we do get to see is slightly less technically difficult than their debut choreography, yet still on par with their growing reputation as a high quality dance group. Monsta X proved with “Trespass” that they definitely have impressive dancing skills and excellent charisma, and I had hoped they would be able to show them through a better window in this second MV. But, alas, it seems I’ll have to wait.

Perhaps when Starship Entertainment becomes more comfortable with the status of the group they can give them more interesting pieces to work with. Boyfriend, at least, has been getting great artistic MVs lately, and maybe someday we will see something like that for Monsta X as well, or something that would showcase their talent more appropriately. 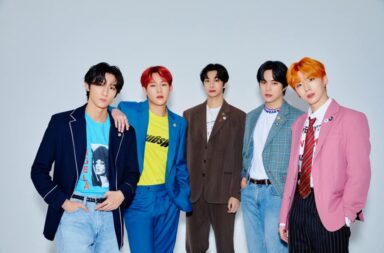