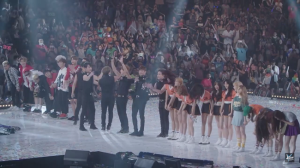 This week, in idols and music, we covered Kisum‘s “You & Me” single, Shinee‘s “Married to the Music” MV, Yoo Seung-woo‘s “You’re Beautiful,” T-ara‘s “So Crazy,” changes in teaser patterns, Cheetah‘s “My Number” and the significance of the devil in lyrics. We also released our review of KCON LA.

In fashion and TV topics, we looked at our favorite performances from last week’s music shows, photoshoots emphasizing patterns and the next block of episodes from Show Me the Money 4.

Our Sunday Social covered last weekend’s KCON at LA, and our Roundtable discussed the thoughts and experiences of LGBTQIA K-pop fans. Our Week in Review segment covered news from the past week.

Ferret on Dear K-pop: What Happened to Teasing?

I was actually under the impression that the K-pop industry never teases and was never into teasing their groups’ comebacks lol, but I did not really get into K-pop until around 2009 and even then was really only focused on one group (Super Junior) for a few years.

One of the reasons I think K-pop doesn’t properly tease is because in a sense the industry is much more focused on other aspects of a comeback — such as the idols, choreography, styling, etc. — than just the music/songs themselves. K-pop is mostly run by companies, and I feel that generally these companies just decide to pop around with a “comeback” whenever they feel like they need to make a quick buck, resulting in K-pop releases that usually consist of mini-albums/one or two songs instead of a serious, full album. Investing in K-pop more for the money than the music therefore doesn’t really motivate companies to properly tease since they know that fans will initially pick up the album/songs anyway, producing comebacks that literally happen two to three weeks after the date they are announced and therefore don’t really build a lot of noteworthy hype.

Recently, I’ve really only felt that BIGBANG‘s “MADE” comeback was relatively properly teased with the promoting of the video teaser, posters, etc. after their 3-year-long hiatus. I would honestly rather have a much more well thought-out comeback every year or even two, especially with K-pop groups inundating the scene like every other half-year. It’s nice to always have new songs from your favorite group, I guess, but most times the songs to me are mediocre (very fun, but nothing mind-blowing) anyway so idk lol. I could be wrong on this, but that’s just my general impression.

차몽차기야 on “Married to the Music” Shows Us the Ultimate Shinee

What a well written article! 👌🏾

Oh man I couldn’t hear the song over the busy video and that’s never happened to me before. Not that I’m complaining xD; it was definitely a pleasant surprise from SM. I really wanted to see more of the choreo since the boys hyped it a little but that’s ok I can wait for the live stages.

Once I downloaded the track and played it a couple times I was in love. I agree its got MJ influences but I thought it was heavily Earth Wind and Fire-like too, right? Like the first song that came to mind while really listening to MTTM was September. I really like the funky style SHINee went for with MTTM, Savior and Chocolate, and Hold You is such a LL Cool J‘s “I Need Love” meets Guy/Keith Sweat -esque sort of vibe. Just ugh.

sujumyeolchi on Music & Lyrics: Sexism, Entitlement and the Devil

While I appreciate the SB team taking my comment seriously enough to explore it further, I have to say i part ways with this critique pretty early on. I suppose my original comment wasn’t clear. My issue lies more with the music video, a) YES HER AGE WTF SM no wonder the boys mentioned how young she is at the presscon… and b) that being tempting is sinful. But the lyrics really point more to a passionate physical relationship that he wants to take to the next level /emotionally/, whereas he doesn’t understand her feelings because he can’t get a read on her. I think being a devil has to do more with the feeling that she’s toying with him? though i could be wrong.

“One day, when you’re lonely and crying
I’ll wipe away those tears, if you would allow me
The stars show my fate and now I desperately want you
All day, I’m in desire and despair, everything is just so amazing
No word is enough to describe this
A bit more complicated than romantic
I can’t figure out what this feeling is” 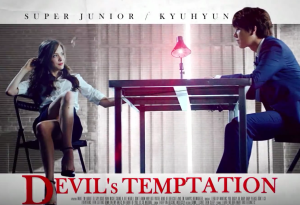 And honestly, i found this part a serious reach: “However, the lack of a female point of view does allude to the fact that it is not valued in these situations, tying it into the objectification of women.”
I can’t think of songs that make it possible to have both points of view without some kind of duet going on. People sing about relationships from their own perspective. Song lyrics are generally from the singer’s perspective. I found this statement really off-putting. and tl;dr i don’t think they’re pushing for sex they can’t have, but love. it’s interesting because plenty of songs by female musicians follow a similar trend, calling the other party out for being a playboy who only wants them for their body…

Thank you for reading and interacting with our content!