"Married to the Music" Shows Us The Ultimate Shinee 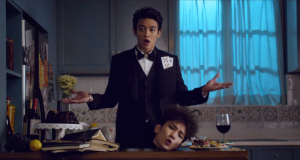 Shinee‘s back once again this summer, following up Odd with a repackaged album, Married to the Music — complete with a title track and MV of the same name. “Married to the Music” follows the namesake of Odd, and kicks the bizarreness up a notch. This time around, it’s the party of the year, and it’s positively to die for — well, at the very least, a little dismemberment is in order.

It’s been a dangerous summer for the boys of Shinee. First, they were kidnapped in “View,” and now they’ve attended a party only to be slowly maimed one member at a time. But, much like the way Shinee made the most of their kidnapping, they aren’t letting a few missing body parts get in their way of having a good time.

The Shinee squad shows up to the party in style, with Jonghyun being carried as he kicks off the track vocally. All seems relatively casual until the boys ingest what’s probably some Shawol-passion infused Everclear to loosen up their nerves. Then all hell breaks loose as the men sit down for a gruesome twist on a game of spin the bottle.

Taemin starts glowing; Key quite literally loses his head; Taemin takes a bat to the head and loses his eyeballs; Onew‘s nose is taken by the sink; Jonghyun projectile vomits confetti before losing his mouth; and poor Minho is set ablaze while holding a birthday cake. All the while, a nefarious bride lurks around to collect their lost body parts.

The party in “Married to the Music” is reminiscent of many a college party gone out of hand, though with slightly more horrifying twists. Each Shinee member brings their own personality to their drunken stupor and that’s part of what makes the MV so much fun to watch. Between turnt Onew elatedly dancing in the confetti vomit, Jonghyun’s bashful face after being kissed, and Minho’s earnest excitement over cake, the MV allows each member to show off their eccentricities.

I’m sure there is some deeper metaphorical meaning behind the combination of a body-snatching bride of Frankenstein, the proclamation of “I’m Married to the Music,” the introductory warning that “Marriage is a Slow Death,” and the idol-fan relationship, but there are more pressing matters at hand. Like the fact that Minho — who only came out to have a good time —  literally just burst into flames (cue the flaming charisma jokes.) 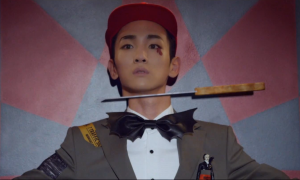 At the end of the day, “Married to the Music” is a wild ride. It’s throw-back campy with its faux-gore, Adam’s Family-esque, hilarious and only slightly disturbing. It’s the kind of MV that had Shawols taking a step back, asking ‘What did I just watch?’ before diving back in to appreciate everything all over again. It’s pure, quirky fun.

Even better yet, it’s another non-box MV from SM Entertainment, with killer production quality to boot. The vintage sets and styling are so conceptually solid and impressive, they make me wonder why SM hasn’t been releasing non-box MVs for ages. They clearly know how to play up a concept to its maximum potential, so why hold back?

The only disadvantage — if you can even call it that — is that the MV is so wonderful, it somewhat overshadows an equally impressive track.

“Married to the Music” is a throwback track done in all the right ways — with the addition of vocal and musical complexities that it seems only Shinee could pull off. The early Michael Jackson influences are hard to miss, but they are combined with a more contemporary full beat and some complex, atypical, chord progressions that give the track a modern — and unmistakably Shinee — flare. 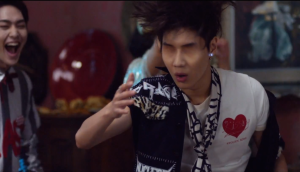 The track builds incredibly well, with an open beginning that lays down a familiar beat and presents the vocals clearly without distraction. The chorus then is presented in almost two layers, with chants of “I’m married to the music,” over group harmonies. The second verse re-arranges and expands slightly, giving enough diversity to keep the track building into the second chorus.

The bridge, in my opinion, is the most interesting part of the track. It is unexpectedly simple, opting for a chant style round-up and no mega-high note. Instead, Taemin almost goes for the high note before Jonghyun intercepts with some killer falsetto. It’s these kinds of little change-ups that keep the track musically interesting and prevent it from being another homage to Michael Jackson. The track wraps up exactly where it should, with no momentum lost as the vocals fade out.

Vocally, Shinee continues to impress. Instead of taking non-vocal line member’s vocal growth as a set-back, Shinee continues to experiment with their vocal arrangements to showcase the best of each member. No group member is ever limited to one section of the song, or one role in the group. That’s no clearer than in “Married to the Music”, where Minho’s raps are interspersed everywhere and Taemin takes the power notes.

“Married to the Music” is more than enough on its own to keep my Shawol heart beating for quite sometime, but Shinee doesn’t stop with just one new song. The repacked album also features three other new tracks in addition to the track list of Odd: “Chocolate,” “Savior,” and “Hold You.” These tracks continue much where Odd left off, and blend seamlessly into the re-packaged discography.

Overall, Shinee never fails to flawlessly execute new and unique concepts. No two concepts are ever the same, and yet each one has you thinking ‘that’s so Shinee’ whether they’re pretending to be zombies, dancing around in pencil pants, or being decapitated by meat cleavers. This speaks to Shinee’s strength as a team, as well as SM’s willingness to let them experiment and grow. Shinee is a strong group because they are able to be one of the most dynamic groups in K-pop, while still maintaining an unmatched consistency of quality and musicality. Plus, they seem to enjoy every concept thrown at them.

Married to the Music is another distinctive release from a group that seems to only improve with time. It’s hands down my favorite Shinee MV to date, and it makes me wonder what Shinee will surprise me with next.

Readers, what was your favorite part of Married to the Music? What were your initial reactions to the shocking MV?