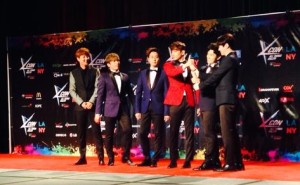 This year’s KCON concerts were held at the Staples Center in Los Angeles. The lineup had a mix of rookie and veteran performers, and each night certainly had their fair share of excitement and surprises.

Seoulbeats was in attendance for both nights of the concerts. Leslie and I discuss some of our thoughts on the two K-pop filled nights.

Willis: KCON night 1 was a fun time. Since it was the first night, there was an underlying anticipation and excited energy that was brewing for those in attendance, or at least me. Also, the ELFs were definitely in the house — those sapphire blue light sticks lit up the arena. 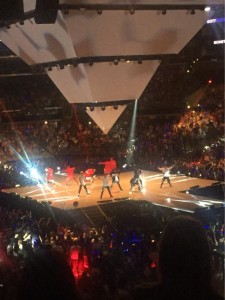 Otherwise, the performances fell in line with how the artists would usually perform them on music shows. The rectangular plus shaped stage framed each performance. Got7 was missing Jackson, who was busy with another schedule at the time, but they held their own on stage. When they performed “Bounce” as their final song, it definitely brought a welcome energy. The special stages were also a treat. Got7 and Monsta X‘s special dance stage showed off their athleticism and gave the fans something unique to get hyped about. Sistar‘s Soyu and Roy Kim also had a cute cover of Colbie Caillat and Jason Mraz‘s “Lucky.”

Even though we both attended, did get a similar vibe of the concert? What was memorable about Night 1 for you Leslie?

Leslie: Oh, man, the energy the first night was off the charts. I was pleasantly surprised by Monsta X‘s performance since I really know nothing about them. Despite being rookies, they were sharp and charismatic, and now I really want to check them out. Even though I absolutely adored Sistar’s performance as four of “Ma Boy,” I have to say that Roy Kim was probably the best performer of the night because of his sheer talent alone. He may be one person, a rather reserved one at that, but his buttery voice more than filled the entire Staples Center such that you couldn’t help but have your eyes on him.

As a longtime Super Junior fan though, I can’t deny that they were the ones that got me on my feet, especially since they opened with “Twins,” which I hadn’t heard live in person and really enjoyed. I loved that against the fact that they closed with their latest single — great juxtaposition. Oh, yeah, and who can forget Heechul on drums for “Sorry Sorry”? That was gold.

Willis: Monsta X are ones to watch in the future. Jooheon, the main rapper, has an ebullient performance quality on stage. I second your thoughts on Roy Kim. His voice was the clearest and strongest of the night. It probably helps that his songs have quieter production, but his melodic runs cut straight through to the heart. Although he stood as a solitary figure on stage, he was able to make a connection with the arena. I also liked that he plugged the UNESCO Girls Education campaign that he was supporting and publicizing at KCON.

Super Junior are amazing live performers. They probably worked the whole stage to its maximum potential. From where I was sitting, I was able to see the crew set up props and instruments, but it was still a stand out moment when Heechul emerged on that platform pounding the drums. The energy in the Staples Center when Super Junior stepped on stage was unparalleled that night.

As much as I loved night 1, I think I may have had more anticipation leading up to the second night of concerts. What were your initial feelings going into the night 2? 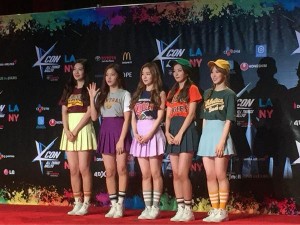 Leslie: I was pretty psyched for night 1 and didn’t know if the second could get me feeling the same way, and while it wasn’t quite the same — mostly since my fangirl level for these groups isn’t the same — it came really close. I arrived a bit late and walked in right as Red Velvet was performing “Ice Cream Cake,” which was a treat to hear live (pun fully intended). I don’t consider myself a fan of them, but I do think that they are incredible singers.

To be honest, I wasn’t too into AOA, mostly because I just can’t seem to get into their music, no matter how hard I try. Block B, on the other hand, had me hooked from Zico’s solo opening to “난리나 (Nalina).” Their charisma radiated with each performance, particularly with subunit Bastarz‘s “Zero Conduct,” which had me screaming and dancing like an inflatable airdancer.

But I was seriously disappointed that Zion.T and Crush‘s set was so short, and was glad that I had seen them in concert previously. At least, what we did get was phenomenal. Zion.T has a truly unique voice, evident in any of his albums, but when you hear him live, he is just shiver-inducing with his emotive timbre and power taking over the whole arena, particularly with his performance of the immensely personal “Yanghwa BRDG.”

I definitely live for "This Love"~ Anyone else??? #SHINHWA #KCON15LA pic.twitter.com/mUxxxl4GEz

The highlight of the night, though, was definitely Shinhwa. While I’ve seen their music videos and some lives of their promotions, it’s just not the same as seeing them in concert. They are undoubtedly deserving of their status as legends in the industry with the great performance they gave. But my favorite moment was actually during their introductions when they formally greeted and waved to each side of the crowd, introducing themselves a total of four times, which was not only absolutely adorable but also showed their appreciation for their fans.

I know you didn’t get to see the entire night of performances due to circumstance, but what was your favorite part of what you did get to see?

Willis: Prior to Red Velvet’s set, CoreMagaZinE was one of the opening acts, and they rocked the stage. They jammed along in shades with a natural cool. The band has all these pop nuances to their songs that made them easily accessible to an audience unfamiliar with them.

I was excited for Red Velvet, and the girls delivered. Red Velvet had a good mix of quirky cuteness and charismatic talents. They were extremely sharp with their choreography and also showed off their vocals during a cover of The Pussycat Dolls’ “Stickwitu.“

I am a fan of AOA, but they didn’t do much to surprise, which is fine. Aside from that random car blocking a part of the stage, I think they played to their strengths. They executed their catchy hook choreography and played all of their hits. “Like A Cat” was a popular stand out as I imagine a lot of people in the audience were waiting for that Brave Brothers track.

Ultimately, the best of what I saw (before I had to leave) was Block B. It was all hype from the get go. As soon as Zico emerged from the platform rapping to “Tough Cookie,” I was engaged. The boys were extremely comfortable moving around on stage and working each section of the crowd. The bass was bumping and they were executing it all from the naturally deep bass of P.O‘s raps to the high notes Taeil hit.

Overall, it was great seeing the performers all receive a strong reception at the concert. We here at Seoulbeats had a blast at the convention and are looking forward to KCON 2016!

Readers, were you able to attend KCON this year? What were your favorite moments and which performers surprised you?

(Photos & media via KCONUSA and Seoulbeats)