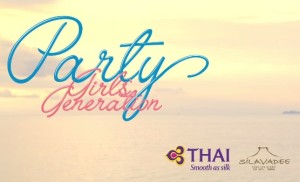 When news came out that SNSD was filming a MV in Thailand for this year’s comeback, fans were excited. We thought that this was a sign of SM putting actual effort into promotions, and a chance to see the members of Girls’ Generation out in the real world!

However, when the MV itself was released, there was a feeling of being shortchanged. If the awkward intro in the plane hadn’t given it away, the ending with the Thai Airways and Silvadee Resort logos definitely should: we’d just watched a four minute-long commercial for Thailand. Well, first class flights to Thailand and a resort beach and rec room, at least.

Though the setting may feel like a compromise, there are still a lot of positives to from this: SM has someone else picking up the tab; the sponsors got valuable exposure; the members got a working holiday, and we got a very pretty MV.

And other endorsements by idols have led similarly delightful results, even on the music front. Big Bang and 2NE1‘s “Lollipop” was very popular when it was released, while the Shinee and f(x) version lives in my iTunes library. There are also other CF songs that are a lot of fun to listen to, regardless of what they’re spruiking, or being used to spruik.

I always felt that was an important distinction to make; because, surely, songs made for a CF isn’t going to be as good as a song made for an album and that just happens to be used for a CF. I mean, sponsors just want a catchy jingle, and would probably not want to spend their money on having better quality music than necessary, right? But the more I thought about it, the more I questioned whether this was in fact true. So, I decided I should try and find out.

Basically, I went through every single CF a SNSD member has done, taken the songs from these endorsements, and ranked them. Simple. I expected that the songs made for CFs would be at the bottom, while the songs not made with the intention of being used for an ad would rise to the top. As my results show, this wasn’t

Below are the conditions I used to select songs and rank them:

a) Any song used for an endorsement with at least one SNSD member counts. Yes, even Jessica‘s stuff from when she was still in the group.

b) No pre-debut CF songs… But there aren’t any anyway, so we’re good on that front.

c) No jingles. A song needs to be at least two minutes long to count.

d) Each song will be judged on its musicality; MVs and other accompanying visuals will not factor into the rankings.

You can here a more continuous (and slightly updated) version in this video, made during the group’s 2011 campaign with Goobne.

#15: Seohyun’s “The Magic of the Yellow Ribbon” with Kim Hyun-joong (The Face Shop)

Whatever your opinion on Kim Hyun-joong after he was outed as an abuser, it is important that we evaluate his artistic works on their own merit, and not bring in our own prejudices. And my evaluation of the full song is that Kim Hyun-joong sounds like crap, because he is a (woman-bashing) piece of crap. He also drags down Seohyun who sounds delightful… Until you get to that god awful chorus.

Yoona is inoffensive in this song for the Korean skincare brand, but the cheap synths aren’t what I’d call Eco friendly. A cute, bouncy tune with earworm qualities is an advantage when it comes to CF songs, sure. But, Innisfree, would it have killed you to get an acoustic guitar instead? You know, real (or real-sounding) instruments that would align better with the fresh, natural feel this campaign is going for? And no, the random dramatic violin in the middle-eight doesn’t count.

Who remembers this mess? But let’s face it, Specialist H.Y. saved this noise with her rap breakdown. Who would have thought that a SNSD member’s rapping could have made a song even marginally better? Hyoyeon‘s dancing also helped pull the boys into line and sync better; and we got to see the Soshi Dancing Queen hit those harder moves like we know she can.

This qualified because it is over two minutes, but it is still a two-minute jingle; nothing more. That said, I could really go some ramyun right about now…

This right here is the very definition of guilty pleasure: a nonsensical plot about hot, angsty and financially stable youths entering a fan-servicing training regime to become lifeguards at a theme park is overlooked because, gosh darn, do these idols look hot.

It succeeds where Co-ed School‘s “Too Late” fails, by not taking itself too seriously. This is lampshaded when Yoona and Taecyeon dissolve into giggles after their extended angst-off. But, I’m ranking this on music, not iconic status; and the song is let down by the flat “whatever you want” pre-chorus and an adlib at the end that is autotuned to high heaven, for no good reason.

I love the strains of Eastern strings in the chorus, and the strains of rock guitar peppered throughout; but it just ends up crowding the OST-standard melody. For those interested, there is an OT9 (sob) version as well.

This little ditty has a cute chorus, but it is disjointed overall. The talk rap happening in the verses kills the flow, and there is no transition to the Taeyeon-Jessica-Tiffany breakdown. Not to mention the fact that the dance line gets totally shortchanged, not even getting the easy talking lines.  They have to share the chorus while the vocal line gets the lion’s share. Just like the choreography and outfits, it all feels a bit lazy.

That said, the Robotaki remix can get into my core anytime.

Two other songs were part of the PYL campaign with SM and Hyundai: one was a BoA song, the other a solo from Jessica. “My Lifestyle” is cute and I made it her unofficial anthem during Sicagate; but even I, a big fan of Jessica’s voice, will readily admit that she sounds particularly nasal and annoying in this song… At certain parts. It’s not for the whole song! But the chorus, especially, does suffer from shrillness. Maybe if Dok2 was in the song more, it could have helped offset some of the teeth-on-edge feeling you get when listening to the song.

This is a fun summer tune, but ultimately goes nowhere; just like the MV. It’s a decent pre-release track and on-trend with the deluge of summer releases happening right now; but the truth is that — save for the exciting shopping list of alcohol (Lemon soju! Tequila! Mojito!) — the song is not very memorable, with the visuals appealing much more.

This song may be found in 2011 album The Boys, but “Vitamin” debuted earlier that year as part of a campaign for the Vitamin C drink. The members got their faces on the bottles and everything! (See above)

“Vitamin” does come off a tad overproduced (as is the most of that album, to be honest), but that shouldn’t distract from how well the song flows. That quiet moment as the middle-eight starts works perfectly in a song that is so bright and brassy, while the adlibs during the second verse add a touch of much-needed softness.

Oh boy, can you believe this situation? I seriously did not expect this song to end up so high on my list. I think the violin-like synths in the instrumental were what did it: they were something different that caught my attention. I also appreciated the use of lower registers during the verses.

As for that chorus: wow, does it stick in your head! Unlike “Party,” where I end up launching into “California Gurls” instead, there is no confusing this song with any other.

The official MV and full-length video above don’t show it, but a guerilla airport performance reveals that this song is for a Samsung initiative. One of the big pluses of this song is how some of the members get to sing in a lower register; this isn’t something many girl groups, including SNSD, don’t get to do, so it’s really nice to hear Tiffany and others sing in a more comfortable range.

The big minus, though, is that the song gets repetitive real quick. That’s great for drilling the name of the Samsung campaign into listeners minds; but not if you’re trying to take it seriously as an actual song rather than an extended jingle; or wondering what on earth you’re doing watching all these SNSD CFs on YouTube; or what the hell Samsung’s Ha Ha Ha campaign was even about (it was to lift moods during the Global Financial Crisis, apparently).

Love Actually is the order of the day in this MV, as romance blooms between the SNSD and Super Junior members in Seoul. The song itself could almost be dismissed as yet another saccharine OST-like song; but what sets it apart from other similar tunes is the energetic tabla, which keeps the tempo up and our brains awake without overpowering the melody. The vocals are also a highlight, with Taeyeon especially sounding wonderful.

Another fan favourite! The retro-inspired version of “Chocolate Love” fit SNSD’s light and feminine image, but it also gave us a taste of the dark side with sultry vocals and distortion of the original brass sample. Easily one of the group’s sexiest songs.

Used for the promotion of Chinese MMORPG Blade & Soul, the Korean version of this song, called “Soul,” is found on the Mr. Mr. mini-album. During that comeback, a lot of fans believed that “Soul” should have been the title song, and it’s not hard to see why. The song has a great energy to it. The electric guitars give the song character, and even the rap managed to not ruin the flow.

And that is my ranking! I did not expect “S.E.O.U.L” and “Galaxy Supernova” to be so high on my list, but there they are.

Think the ranking should be different? Then, by all means, let us know how you would rank these songs in the comments below!