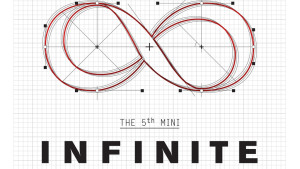 Infinite seems to be sticking with the dramatic in the latest lead single “Bad” off Reality, the group’s fifth mini album. Produced by Rphabet, “Bad” as a track contains the gorgeous orchestral instrumentals and epic build ups of Rphabet-produced predecessors such as “Back” and “Destiny.” The song speaks of an obsessive love for a “bad” girl, and it’s only in the music video that this fairly used concept is fleshed out in a creative and provocative manner.

The music video opens with leader Sunggyu sprinting across a deserted car park, and a glance over his shoulder shows that he is running from an unidentified pursuer. As the dramatic violin instrumentals crescendo, the scene cuts to the members in front of a cracked bathroom mirror, each sporting his own bloodied and bandaged hand. Halfway through the video, the members’ actions are explained; a quick shot of the bathroom reveals a girl’s ominous silhouette reflected in the previously whole mirror.

Through the lyrics, it becomes clear that this girl is the object of the members’ infatuations, though she is described with little love. With “cold eyes” and a “sharp tongue,” the significant other is turned into an antagonist, and the music video takes this characterization to extremes by portraying her as this demonic creature quite literally out of a horror movie. In general, “Bad” has very much a horror movie feel to it, whether through the blue hue cinematography or eerie scenes of dilated eyes and bloodied hatchets that flash for mere seconds on screen. 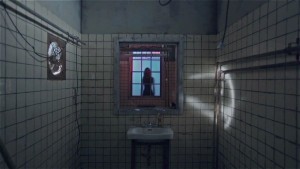 After the members break the mirror, a drop of blood from the wound falls onto a mirror shard. This action is mimicked as dark paint begins to drip down an empty mirror frame, and it becomes clear that this relationship is a destructive one, as the members lose sight of themselves in their pursuit of this girl. In fact, the girl may even be to blame for instigating the madness. At one point, her manicured hands wrap around Hoya’s mirror as if she is the one manipulating Hoya’s reality, and her devious grins through the music video show no remorse for the anguish she inspires.

And Infinite are aware of the potential for her deception, as they sing about this significant other surrounded by literal smoke and mirrors. In the chorus, the boys declare, “Betting on you,” acknowledging the risks of their gamble but rolling the dice nonetheless. Still, there is a helplessness in the lyrics, as much of the blame for seduction is placed upon the love interest:

Even your lies are sweet, your lips are like a warning, like a red
You whisper in my ears
Lose my focus because of your spell
Things are getting erased one by one, I can only see you

The music video, in turn, correlates the girl to a supernatural force. Free swinging light bulbs, flickers of the television and her flashing appearances portray her presence as a powerful disturbance in an otherwise ordinary reality. The ending sequences involving mirrors show L’s reflection without L while Hoya’s reflection remains in place even as Hoya lifts his head. As Sunggyu comes to a stop in the garage and turns around, he is confronted not with a person, but with his own mirror image. As Sunggyu stares, his reflection smirks and leaves the frame. 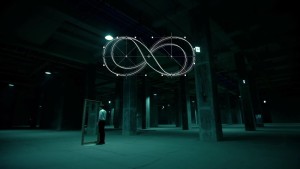 Interestingly, for this comeback, the Infinite logo chosen is a precise drawing of the Mobius strip. Both the Mobius strip and the mirror create form through symmetry, yet the symmetry of the mirror is broken in the end as Sunggyu’s reflection walks away. Meeting and pursuing this love interest has ruined the members in such a way that their reality becomes unrecognizable the more illogical and desperate they grow. The girl portrayed in the music video is shown as something dangerous. She is a natural disaster, wreaking havoc within her suitors’ minds, a disruption in the conventional chain of events of a life.

“Bad” is similar to Infinite’s previous single “Back” in terms of message, as both are about desperately pursing an elusive love interest. What makes “Bad” stand out is its beautifully dramatic orchestral instrumentals, which create a grand build-up to make up for rather simple and repetitive chorus.

At first listen, the song contains so many different elements that it comes off as a bit disjointed between certain verses. Dongwoo’s rap is one of the portions that does fit smoothly into the song, and the way the verses are delivered, slowly and almost spoken, give the song a darker tone. 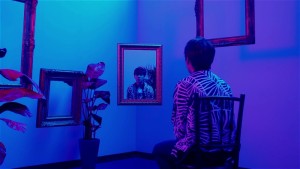 A review of Infinite is incomplete without mentions of choreography, but the dance scenes viewers are treated to are few and far between in the video. What choreography is shown is sharp, as always, and largely consists of an arm-swing sort of move as well as body waves. That being said, Infinite’s “Bad” stages are sure to be anticipated performances, whether for the choreography or presentation in light of the interactive 360-degree camerawork that was their “Bad” teaser.

Infinite will reportedly release a second version of the “Bad” music video, and it’ll be interesting to see if this second video will include the 360-degree camera technology, more choreography or simply a new interpretation of the song. But, for the time being, the original “Bad” is strong enough to stand alone as a solo offering. While Infinite has done the dark, fast-paced, and dramatic in previous releases, “Bad” has enough power and creative presentation to back the track up as one of Infinite’s strongest in their extensive discography.