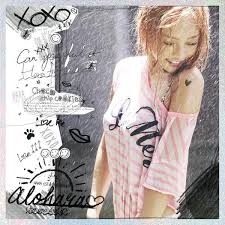 If I had ever made a list of idols unlikely to ever debut as a solo artist, Gu Hara from Kara wouldn’t have topped the list, but she would have made the top five. Hara is the visual and subvocal of a group that doesn’t have the greatest main vocals to begin with. Yet, the mini-album Alohara (Can You Feel It?) has been released by DSP Media following Kara’s lackluster In Love. Like a storm on the horizon, I can’t help but feel that autotune and peppy songs are coming.

Alohara starts off with “How About Me?”, a song that produced a unique reaction the first time I heard it: genuine fear. The instant the unholy union of an anemic trap beat and overly-pitched autotune reached my ears, my head began throbbing, and I began to wonder if ­Alohara would require ibuprofen or vicodin for the inevitable migraine.

While “How About Me?” never gets that bad, lessening the post-production effect work when Hara begins to sing, it’s still not good. Hara’s voice blends into the track, and telling her apart from guest artist Youngji is nearly impossible. The tone of the song is all over the place, with Hara sounding too confident for a song whose lyrics are riddled with insecurities, but too serious to write off her doubts as sarcastic.

Title track “Choco Chip Cookies” is a song that does no favors for anyone involved. While the slower beat and lighter instrumentals are soothing after the mess of “How About Me?”, they highlight Hara’s vocal inadequacies more than they cover them. She’s constantly straining to reach notes that are just out of her range, leaving her sounding shrill for the majority of the song. My heart breaks even more for Giriboy, who sounds ten times better despite blatantly not caring. The use of chocolate chip cookies as a metaphor for oral sex is half-baked at best, being both awkward and illogical. It’s aiming for sweet but comes off as skeevy, and the overly literal lyrics send the audience firmly to the world of ‘ignorance is bliss’. 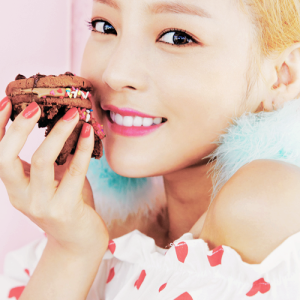 “Lalala” is the first song to match my expectations for Alohara. I expected peppy songs with a smattering of autotune because that is what suits Hara’s voice best, both in range and delivery. As such, “Lalala” blows the previous two songs out of the water. Laced with an ’80s pop vibe that goes perfectly with Hara’s lighter vocals, the track gives her some much needed sass. This is confident Hara, one who cannot be shaken. She’s like a cat playing games, challenging guest Matthew to step up or shut up, and owning him every step of the way.

“Haragu” is the only truly solo song on Alohara — this is the only track where Hara doesn’t have a featuring artist. It’s only fitting then, that “Haragu” is the best damn song on the mini. Propelled by a truly fabulous guitar riff, “Haragu” has a wild child edge that Hara utterly owns. This is Hara as the HBIC, fully confident in her own fabulousness, and that confidence carries over into her performance. Here, her longer notes work. Here, her voice never falters or fades out of range. Here, Hara is a solo star. If this had been her title track, Hara’d have been number one with a bullet.

Alohara winds down with “Rainy Day” featuring Taebin. It’s a letdown, pure and simple. The production sounds oddly sideways — it almost fits, but it needs to be tweaked before it does. The base is solid, but there’s nothing that separates from the hordes of ballads in K-pop. It’s as grey and blah as an actual rainy day, despite fact that “Rainy Day” is ostensibly a love song. The return to the pitchy production of “How About Me?” just pours salt in the wound of having this dull bit of misery close out Alohara over the glory of “Haragu”. 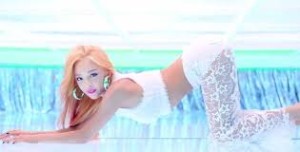 DSP clearly decided that the best way to market Hara as a solo singer was to remove her from the box of Kara’s signature peppy dance-pop sound. The problem with that idea is that said box is Hara’s skill set. Give her a high-energy song that requires sass and confidence, and she’ll work it like the rent’s due tomorrow. But the slower, more vocally demanding songs on Alohara do nothing but expose her flaws and make her sound worse, thanks to the obvious autotune.

If Alohara had been in the pop-rock vein of “Lalala” and “Haragu”, I would have loved it. It wouldn’t have been album of the year, but it would have been fun. Instead, Alohara sets Hara up to fail, giving her songs outside her range with emotions she’s not as good at conveying vocally. If nothing else, Alohara proves Hara has what it takes to be a solo star. It’s just not this.