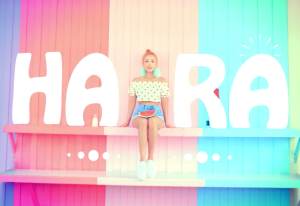 Kara’s Goo Hara recently made her solo debut with the album Alohara. The title track “Choco Chip Cookies” is another sweet song that fits summer like many other seasonal releases. However, will it have enough impact to stand out from the others and draw attention to her debut?

“Choco Chip Cookies” is a simple track that is filled with the sweetness of sugar. The lyrics talk about someone who is making something sweet for the one they like.

It’s not a special day but I made it
to make you happy (love me)
I put on my apron, made dough,
added butter and deliciously baked it

They are light and simple with nothing deeper than the surface message. This isn’t necessarily a bad thing as it is a characteristic of most summer releases. However, it also doesn’t allow the lyrics to stand out from the rest of summer.

The chosen melody doesn’t add anything new to the song but it does fit with the simplicity of the lyrics. Hara’s vocals float on top of the backings to add to the song’s effortless feel. The only negative aspect of the melody is that it is quite repetitive and could become boring for some people. As unfortunate as it is to say this, the stand out part of this song isn’t Hara but featuring artist Giriboy. He takes control of the song as soon as he enters it, as he weaves his verse to the beat, unlike Hara’s vocals. 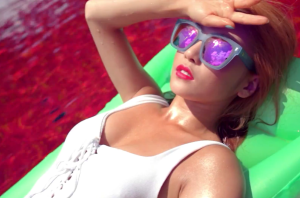 The backings change throughout the song giving it a different feel each time. However, this change doesn’t create an ebb and flow of emotion, rather a slightly jarring distinction between each verse. For instance, the pulsing beat that begins the song immediately grabs attention and sets a more sultry tone for the song. Afterwards, this tone is flipped when things become slower and lighter as the verses start. It is a disappointing change from what was promised at the start of the song. Overall, as a relaxing summer tune, it does well, but it is in danger of becoming boring in many places. So what does this song need to take it out of the boring category? An interesting MV!

The MV for “Choco Chip Cookies” takes on the characteristics of most summer releases; it is colorful, uses beautiful landscapes and portrays everyone having fun. The MV is simply about a young couple as they enjoy life with no care in the world. It fits the song perfectly, with the light and visuals mirroring the song’s tone. Some shots are really beautiful, such as the dyed red pool water and the sunset dancing scenes. The only problem is that a lot of the MV’s shots seem totally unrelated. For instance, the contrast between the studio shot scenes and the outdoor ones is striking, despite the fact that they use similar colour schemes. The studio scenes seem more characteristic of an electronic dance song than any light summer tune. In effect, these scenes confuse the viewer on the song’s purpose; there is no clear message. 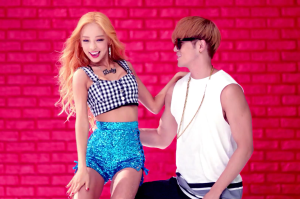 Summer releases hardly ever go into deep amounts of detail, choosing to only touch on the surface. “Choco Chip Cookies” isn’t any different in that sense as it is created on face value; each shot is pretty, but there really isn’t anything more to it. It’s just sad that Hara as a ‘visual’ idol making her solo debut cannot break that title. Yet, a solo debut needs more than just a visual. This was the time for Hara to break out of her identity as Kara’s Hara and make her own mark, but she didn’t do that.

This song is cute and sweet, but it is nothing different from every other summer release. Personally, I was hoping for more from this debut, especially with the promising teasers, but was ultimately disappointed.

So, readers, what do you think? Is this solo debut what you expected?