Web dramas are the latest idol trend, and Exo are labeled as the “trendy” idols, so it only seems fitting that SM Entertainment would make the most of the now ten-member boy group to partner with Naver and produce the web series, Exo Next Door. Even before details of the production were revealed, the title alone promised some cringe-worthy goodness, and let me say, the final product does not disappoint.

If Got7‘s Dream Knight felt straight out of an OC (original character) fanfic, then Exo Next Door takes it to a whole other level. Not only do the members of Exo play caricatures of themselves, but their lucky neighbor, Yeon-hee (Moon Ga-young) becomes part of a love triangle between kind-hearted D.O and cold, but handsome, Chanyeol.

The story itself — for what little plot there actually is — centers around Yeon-hee’s life once four members (Chanyeol, D.O, Baekhyun and Sehun) of famous idol group Exo move in next door after an ambiguous hiccup in their promotion schedule (cough, the Exodus of 2014 is almost humorously replaced with Suho tripping over a rogue water bottle). Naturally, she’s a die-hard fan of the idol group; and almost immediately after discovering that the new neighbors are neither the serial killers nor the “ugly asses” she originally thought them to be, she phones her best friend and the two produce binoculars to spy on the idol group through the window. 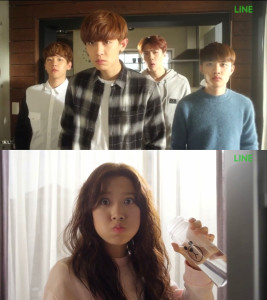 Yeon-hee’s life continues to whirl into a fanfic turned reality when her mother tells her she will be responsible for cleaning Exo’s apartment. In true fanfic style, all the members take a special interest in their new cleaning girl and not only nickname her “Incheon Girl” but also turn up to defend her, and later even invite her to a photoshoot set to meet the remaining members properly. Though most members warm up to her immediately, Chanyeol’s character alternates between yelling commands at her and brooding awkwardly about while she’s cleaning his room.

In the early episodes it was revealed that the very modern house the boys are temporarily occupying was once Chanyeol’s grandfather’s home. Flashbacks keep alluding to a music note pendant — gifted by said Grandfather — that Chanyeol lost, and he has returned to the house to reclaim what was once his. If one was paying attention in the first episode, they would notice that Yeon-hee asked her mother why someone would move into “Chan’s grandfather’s house,” which hints at the fact that she and Chanyeol are not strangers and may explain why Chanyeol insists on lurking and brooding in her presence. Perhaps she is in possession of his missing pendant as well as his heart.

So, what is Yeon-hee’s fatal flaw? According to her first love, it is that she is unable to communicate with those she harbors affections for. However, according to her actual characterization, it seems more likely that she is embarrassed by everything and blushes uncontrollably if a member of the opposite sex so much as says hello to her. As eyeroll-worthy of a weakness as that is, Moon Ga-yeon has a way of playing Yeon-hee that makes her adorable enough to continue watching. Even more than that, Yeon-hee’s inner monologue often voices the exact (and rather embarrassing) thoughts we fans have when staring longingly at photos of Exo online. Since the audience is not privy to any other aspect of Yeon-hee’s life aside from her Exo obsession, Yeon-hee becomes a blank canvas on which fans can project themselves (ie, the perfect Mary Sue), and that’s exactly what script writers intended.

Halfway though the series, very little has happened in terms of development. If you count the one minute intro and gratuitous photo/video montages, there’s only around seven minutes of actual programming an episode. As things stand now, both Chanyeol and D.O have somewhat developed a romantic interest in Yeon-hee — though all she’s done is blush and dust random surfaces. Baekhyun has caught on to the blossoming love triangle, and Sehun remains oblivious — instead focusing his attentions on befriending her brother who makes a mean espresso. (But we all know if this was a real fanfic, it would be bubble tea.) Nonetheless, the mini episodes are filled with humor, fandom inside jokes (Chenderella, anybody?), and gratuitous close-ups of Exo’s handsome faces. 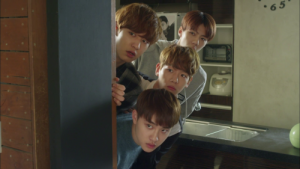 Three years since debut, Exo has reached the point in their popularity where many of them are beginning to spread their own wings with individual activities. SM also is no stranger to putting their idols everywhere, and with each SM group it is only a matter of time before a few members try their hands at acting. D.O, surprisingly to many, was a stand-out idol actor of 2014 between his roles in It’s Okay, It’s Love and the film Cart. Chanyeol also has begun to appear in a series of solo variety appearances between Dating Alone and the special Lunar New Year Star Golden Bell broadcast.

SM is really trying to push Chanyeol as the face of the group in 2015, so naturally he takes the role of main lead and love interest while poor D.O is bound to suffer second lead syndrome. This is unfortunate, not only because D.O has actually been kind to Yeon-hee, but because out of the four Exo leads, Chanyeol’s acting is arguably the weakest. His crabbiness and perpetually clenched jaw don’t exactly endear the audience to him, nor does his tendency to creep around Yeon-hee and provoke her for no reason.

Chanyeol might be the resident face and D.O the veteran actor, but the real breakout star of the mini-series is maknae Sehun. Perhaps it’s because he’s been handed the funnest sub-plot, or maybe it’s just that the maknae hasn’t had much variety or television exposure previously, but his comedic skills came as a huge surprise to many. His 4D character, at first, seemed to contrast his rather stoic and standoffish stage persona, but somehow it feels like the Oh Sehun of Exo Next Door is probably closer to the real Sehun than the glimpses we’ve seen on stage. Regardless, his bromance and little tent pow-wows with Yeon-hee’s brother are the highlight of each episode. I think I’m not alone in saying I ship their bro-tp more than Chanyeol and Yeon-hee’s actual love line. 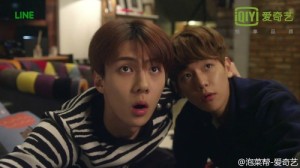 Since the episodes range between nine and fifteen minutes in length, it really doesn’t feel like a waste of time to tune in twice weekly online. Furthermore, thanks to the partnership with Naver, the drama is available in multiple countries with English subtitles (among other languages). Much like with Dream Knight, there’s a lot of promise in Naver’s expanding web series market, especially in terms of producing even more content for hungry fans to consume.

If you aren’t already an Exo fan, Exo Next Door is not likely to convert you, nor is it likely to appeal to you on any level. That, however, is the beauty of web dramas; they give the fans more images to consume of their favorite groups without saturating broadcast television with their faces. For us fans, where else are we going to be given images of Baekhyun playfully mounting Sehun and Chanyeol having water spit in his face? In a few years, Exo Next Door will definitely be a cringe worthy memory; but for now, we can sit back, relax, and meticulously screen cap all the gloriously awkward expressions that come our way every Tuesday and Thursday evening.

For those of you keeping up with Exo Next Door, how are you liking the series? Which member stands out the most for you?