“A café au lait shade of subtlety Lim Kim’s musicality shed, for it was an irresistibly glittery promise offered by K-pop that lay vacant ahead.” 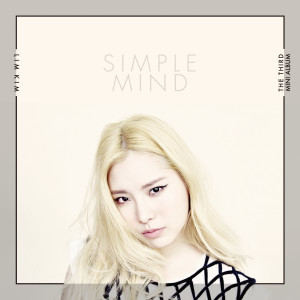 This nifty little couplet created by yours truly in the throes of Lim Kim’s “Love Game” MV from her third mini-album Simple Mind summarizes my initial conceptualization of her music. The first two songs that I heard from Lim Kim’s album A Voice in 2013 made me an instant fan of her work. “Colorring,” and the hugely popular “All Right” were distinctly folkish songs with “café au lait” imagery, musical delicacy and a true-to-the-spirit-of-indie incomparability. To my surprise, the vocal color I had intended for Lim Kim contorted into a muddle of neon colors, seductive deserts, bare legs and voyeurism and demanded that I reassess my view-point.

Although not always bad, the impressibility of K-pop is a contrived thing; transforming with time and trends a distinctly beyond the bottle artist into yet another section of the collective allure. “Love Game,” seems to mould Lim Kim into an idol-esque artist with catchy music, flashy choreography and plenty of physical appeal. Although some of the disappointment I felt after watching Lim Kim’s MV has yet to fall off the top shelf, there are good points to “Love Game” that displayed Lim Kim’s versatility and talent and officially gave her mesmerizing voice the highest degree in my imaginary hierarchy of K-pop vocals. 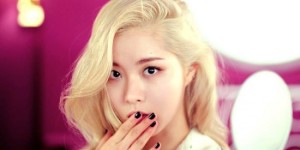 The “Love Game” starts and sees us into a fuchsia and lemon bedroom with beautiful décor and a fabulous Lim Kim rising from her beauty sleep. The fact that she is blonde is not the only surprise, but the commonality of the introductory scene decked out in furniture and colors straight from a pre-revamped 4Minute or TaeTiSeo music video makes one hope that the rest of it retains some of her original essence as an artist.

In attempting to understand the significance of the men in the “Love Game” music video, Lim Kim is situated as enigmatic, causal and incurious towards their advances and unconsciously combats them in a natural albeit discursive way — punishing them in their attempts to complicate and distort love. She’s a sort of fool-fending woman lounging in her intimacy; teasing and testing the men who seek to disrupt her with gratification and seduction that is essentially only for herself, making her feel more confident about her value after moving too fast and getting hurt. To simplify our understanding of a “Love Game” and Lim Kim’s intent while tailoring her song and MV, we need to look at the “Love Game” as definition. Hence, dear readers, I will give you my own: a “Love Game” so to speak is a web of challenges spun by two lovers for one another unconsciously. 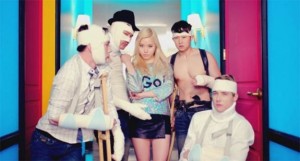 The melding of the music video and lyrics results in the birth of a hilariously diametric comparison. Lim Kim’s demeanor maintains its oxymoronic nature as the cool and simple woman eager to risk everything for love in both the MV and song, where the temperament of her lover in the song is of an equally calculated and suave man who has the tools to battle her in the love game. Therefore she sings lyrics of “caution and curiosity” after recognizing that she was immature and had overcomplicated love, while swatting away the antitheses (the bumbling boors in the music video) of the lover who caused her to evolve into a keen and mature woman. In this sense Lim Kim uses her cool and simple approach to love to tease the multicolored men in the MV, and essentially lifts herself up from her heartbreak through withholding her attention and attraction.

Through the lyrics we come to understand that her love has become deep after fighting in the love game once before, so Lim Kim tactfully pretends to be innocent externally while a mature woman pulls the strings internally.

If you know everything, you’ll get hurt so shut up

you’ll get hurt so shut up, so frustrating

She challenges her lover’s self-styled knowledge of relationships after he broke her heart and finds strength instead in the solutions she gathered when she was immature and sensitive. Hence, in a smaller world she knows “everything” and tells her suitors to buzz off because they’ll only get hurt if they dare to contend with her. While the larger scope of the lyrics in “Love Game” deal with Lim Kim’s maturation and familiarities, she simultaneously creates yet another love game through the MV where the challenges she suffered in her own love game are put to use as obstacles for the men. Lim Kim considers love simple and silly and declares that it’s “gonna getcha” one way or another. Yet she ingeniously makes clear a distinction – it gets to people who are similarly simple and silly quicker than those who are complicated and calculated. 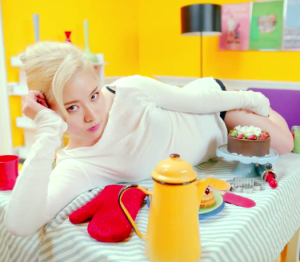 Although it is important to understand that an artist has a personal vision for their music and style, sometimes one can’t seem to get over their longing for a return to indie. A solution to this sentimental conundrum is to see that Lim Kim’s Simple Mind unfailingly has her original indie flavored songs, but openly she promotes more K-pop inspired songs like “Awoo” and “Love Game” in order to appeal to fans more easily on K-entertainment programs. In this case she is not only versatile and talented, but also a most thoughtful artist.

After listening to “Love Game” several times, thoroughly analyzing its concept and reassuring myself, I’d like to declare that fans of Lim Kim’s folk-indie flavor should not be disappointed in her transition into K-pop. Rather, they should rejoice and enjoy the fact that even though the MV and lyrics for her songs might dispel into simpler and more common ideas, her beautiful voice will never wane. “Love Game” in the end may seem to mould Lim Kim into an idol-esque artist with catchy music, flashy choreography and plenty of physical appeal, but its crux is the fact that Lim Kim perfectly entertains fans visually with loads of color and felinity while appealing to them lyrically through a light, romantic and comedic song.