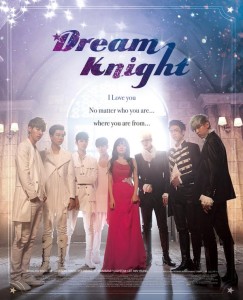 GOT7‘s new web drama, Dream Knight is something straight out of an OC/Got7 fanfic. The drama, presented online through Navercast TV, Youku and Todou, packs all the fun of a shouju manga — along with gratuitous silliness — into short 15 minute episodes that allow the members to charm their way further into fans’ hearts.

Beyond the fantastical flower boys and magical realism, the web drama comes at a time when web-based drama productions have become the hot trend for marketing idol group members to younger audiences and JYP is not alone in cashing in on the trend. While web-based dramas were originally the effort of smaller production companies, this February, major network KBS announced its intention to help produce the upcoming web drama Love Detective Sherlock K, starring Sunggyu (Infinite) and Yura (Girl’s Day). With this idea in mind, it becomes apparent that there is a lot more at play than idol group Got7 simply acting in a web series as a means of fanservice: idol culture is beginning to evolve alongside Korean media.

First things first, any drama that blatantly quotes the Backstreet Boys in its tagline has my attention. Teaser posters for the drama, released back in December featured the line “I love you. No matter who you are… where you are from….” It only gets better from there as the introductory credits feature the Got7 boys as White and Dark Knights, who engage in a (rather hilarious) dance battle inside a dimly lit castle. 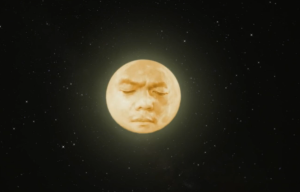 The story itself centers around Joo In-hyeong (Song Ha-yoon) who is a tragically orphaned high school student. She lives alone in a trailer by the river and is bullied by school rival Jenny (Miss A‘s Min). She maintains a strong sense of candy girl perseverance through her circumstances and even has time to fangirl over her favorite idol group. Her solitary life is disrupted through the appearance of four mystery boys who, without given reason, begin to follow and protect her.

The boy group comes into In-hyeong’s life in two ways. In some sort of Got7-ception, three of the members (Jr, BamBam and Yugyeom)  are members of top idol group GOT, who happen to attend her school. The other four (Jackson, Mark, JB and Youngjae) serve as her guardian angels of sorts — who take their inanimate form in cute keychains on her backpack. The four mystery knights have been sent to her for reasons yet to be revealed, but it’s clear that the boys and In-hyeong have a mysterious (and most likely magical) history. Of course, these mystery boys also come equipped with magical powers that shoot out of their fingers in cute cartoon animations as opposed to semi-realistic CGI. 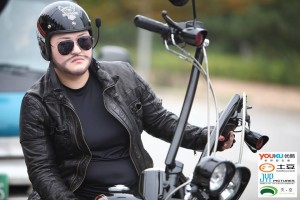 JYP artist cameos litter the episode, each appearance more quirky than the last. It’s these strange little touches that make the drama most enjoyable. 2AM‘s Changmin cameos as an eccentric camera salesman; Jackson at one point twirls around a bearded Lee Gook-joo while tickling her chin before the group breaks out into a dance number; JYP himself even takes a cue from the Teletubbies and appears with his face superimposed on the moon as he smiles down on his Got7 boys and the object of their affection. I couldn’t dream this stuff up if I tried, and that may be the sole reason this web drama still has my attention.

By no means am I saying Dream Knight is a good drama — because everything from the production to camera work to plot is severely lacking. However, these factors are overshadowed by its ridiculousness. The fifteen minute episodes pack in so much silliness and pure fanservice that it’s hard not to enjoy them.

Even more, the web series manages to keep up with the pace of some traditional hour long dramas — which says something about how much of an unnecessary time-suck traditional dramas can be. Sure, the web series is missing real character development, but it is hardly necessary when the point of the drama is to watch the Got7 boys be both charming and silly as they duel it out for a girl’s heart. All these factors (aside from JYP as the Man in the Moon) are not unique to Dream Knight, in fact, in many ways they are all the tropes that have made web-based dramas the success they have been for the past year or so. 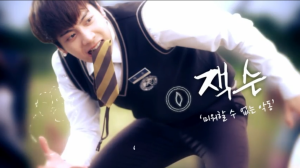 s mentioned earlier , web dramas were used as a means of promotion long before entertainment companies and major networks like KBS picked up on the trend in 2015. The earliest web dramas were born of dramas that were unable to secure a television broadcast slot. Naver aired its first web drama in 2013 and has since hosted over 20 web dramas; each new web drama featuring a more idol-studded cast than the last. K-pop idols like Minah (Girl’s Day), Ji-yoon, Ji-hyun (4minute) and Dong-jun (ZE:A) all tried their hand at web dramas in 2014. In 2015, Dara (2NE1) has already been cast in upcoming web drama Dr. Mo Clinic, while Sunggyu and Yura were cast in the aforementioned Love Detective Sherlock K.

By the conclusion of 2014, web dramas, webtoons and web series had solidified their place in South Korean media and became known as “snack culture.” As the name implies, these short drama episodes — generally less than 20 minutes in length — are able to be consumed quickly by audiences, especially younger audiences who identify with their shouju manga style plots. Web-based series are also popular with youth because they are available on the go through mobile devices and tablets, and students can watch them during study breaks or while commuting between school and hagwon.

Given their accessibility to younger audiences, web dramas and web series are beginning to move to the forefront of non-music related idol marketing. Not only are individual idol-actors being cast in web dramas, if Got7 is any indication, entire idol groups can have web dramas created around them. Last month, Exo aired their own mini web variety series through Line TV and there are rumors that Exo will also have their own web drama Exo Next Door sometime in the near future. 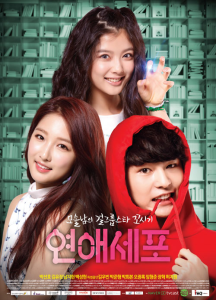 These small-scale productions offer a chance for idols to engage in both fanservice and the acting world off-stage — which serves as a nice compromise for fans who want to see more of their favorites and viewers who are tired of idol-saturated television programming. For some idols who may not be quite ready for the small screen, web series are an excellent starting place for an acting career. On the marketing side, these productions also allow for idol groups to make short term contracts with top international media distribution companies like YouTube, Naver, Todou and Youku. For entertainment companies, web dramas are a particularly smart investment with low production costs and existing popularity with their target demographic.

While GOT7’s Dream Knight is certainly no contender for drama of the year — or even web drama of the year — the rise of web dramas and web drama culture, along with idol’s continued permeation into the market is noteworthy. Idol culture continues to find new ways to be consumed in an ever-evolving media culture. Personally, as an avid drama viewer, web dramas are exciting because they are inherently non-conventional, even when they follow predictable plots. Although episodes may be limited to 20 or so minutes, they have the potential to experiment with content, production and style that traditional dramas may no longer be at liberty to explore.

Readers, are any of you keeping up with Dream Knight? If you watch web dramas, do you have a favorite?