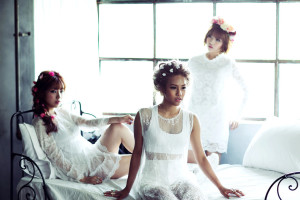 The K-pop scene has unfortunately lost another group just two months into the year. GNG Production announced that it was disbanding girl group Tiny-G who released singles such as “Miss You” and “Ice Baby.” Although they have released a few albums since 2012 and changed the line-up, the group never managed to achieve a major hit. But, luckily for fans of the group, the members aren’t going to retire from the spotlight. The company stated that Do-hee would continue honing her acting skills while Mint and J. Min would pursue singing careers in Thailand.

One local news agency tried to blame Do-hee for the break up, claiming that she refused to participate in Tiny-G’s activities after gaining popularity for her role in Reply 1994. But her agency was quick to come to her defense, replying, “In all honesty, Do-hee isn′t an S-grade celebrity. How can she be in the position to do as she pleased?” The company further stated that it would discuss taking action against the news agency for spreading such outlandish and harmful rumors.

Although it’s sad to see another group disband, hopefully the girls will find happiness with their new careers!