Giving BTS a Second Chance, One of The Most Beautiful Moments of Life 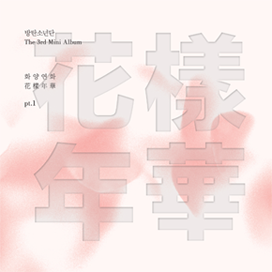 Let me preface this by saying when I first heard Bangtan Boys I wasn’t convinced they were worth my time. I honestly thought of them as any other rap group—same sound, same image. Their compositions just weren’t my cup of tea, erring more on the side of a dub-stepped Wiz Khalifa than Kendrick or J Cole. Suddenly Rap Monster kept showing up on my radar, first with his collaboration with Warren G, then being invited to work with MFBTY. Obviously I was missing something, because I wasn’t making the connection between BTS and their leader getting friendly with legends in the industry. So it was only natural I give the entire group another listen.

Lo and behold The Most Beautiful Moment in Life Pt. 1 rolls through, and I’m suddenly nodding my head, thinking, “Ah, so this is what everyone’s talking about.” The album opens with “Intro: Mood for Love,” a Suga compilation that’s all piss and vinegar. The title in and of itself is interesting, especially considering the song’s message and composition. It’s as if now, considering the hurricane his life was (as in the one love survives in “Moody’s Mode for Love” and the storm our lovebirds let whip around them in “I’m in the Mood for Love”) he’s found his happiness and is ready to love and live happily. The hollow slap of a basketball on concrete mixed with the whine and squeak of his trainers makes this song as much theater as it seems to be autobiography.

Using the conceit of a young man playing basketball, pushing himself to reach the rim, to score no matter how far away the goal seems, is perfect for the stark beauty of the composition. In a world where happiness and success are measured by possessions and the accolades of a peer system built to judge you if you stray from the “norm,” Suga releases his aggravation, teeth bared, throat raw from growling at the world. When Suga tells us he’s happy, the ball stops bouncing. He’s reached his goal and can breathe easy:

Shoot, the court is my playground
With my movements, a small ball bounces next to my feet
The results are as low as the floor
But I just shout outloud to the world that everything’s gonna be alright
But the world gives me fear, then just stop
Thoughts fill my head and instead of the ball, I throw my future
Because of the other’s standard of success
My worries spread like cancer again, god damn it

It was a stroke of genius using this song as the comeback trailer for the album. It draws you in from the first jagged breath, then grabs your heart and squeezes.

The lyrical tenderness and musical grace spills over into lead single “I NEED U.” One of the rare occasions when both dubstep and auto-tune are used in a song and neither made me roll my eyes and reach for the fast-forward button, which would have been a shame, because lyrically the song is really beautiful. If a soul-ripping game of tug-o-war can be beautiful. Our protagonist is fed up with his lover, but despite the very real, very inelegant anger radiating from him, he can’t deny that he needs her, a primal yearning for the person that rips out his heart and leaves him bleeding out with just her touch: “I’m sorry (I hate u). I love you (I hate u). Forgive me. I need you girl. Why am I in love alone, why am I hurting alone? I need you girl. Why do I keep needing you when I know I’ll get hurt?”

If I didn’t know any better, I’d swear “Hold Me Tight” was a B-side from Crush’s debut album. The slow groove is so thick, the thump an insistent knocking on parts meant for private moments. With a little bit of “Give it to Me” thrown in there to give the song its cherry-syrup sway, “Hold Me Tight” is really just the classic forlorn lover trope. Our hapless protagonist has done his leading lady wrong, pushing her away when he should’ve been holding her close enough to still carry her scent on his skin. It’s a pleading lament Keith Sweat would be proud of. All he wants is another chance to feel, to hold, to—in the eternal words of Toni Braxton—breathe again:

If you’re not here, I’m just a corpse, so how can I breathe?
It hurts, I’m always cry cry cry
I’m going crazy, exhausted without you
I think of you without stopping
I hate it all, I hate every single day

After a short skit where the boys share anecdotes, the album offers what I actually expected of the group. But, man, the way they did it…. They got me. They got me good. “Jjeoleo” (a slang word meaning “sick” or “dope”) is an absolute tune! It’s the club banger we didn’t deserve but were blessed with anyway. The use of synths to simulate the mosquito whine of a saxophone, something not exactly commonplace in hop-hop, “Sick” makes excellent use of crescendo to keep listeners hanging on by the skin of their teeth for that bass drop. And when it drops, it gets inside your chest and makes its way to your limbs until you’re bouncing around the house breaking stuff. Seriously, if you don’t feel yourself going cross-eyed and seven different types of buck when this song gets going, I don’t trust you!

Lyrically, the song is just what you think it is—work hard so you can play hard. “Sick sick sick, the smell of sweat in our studio. Look, my ringing dance moves answer. All of you are so weak, such losers, crybabies and idiots. Has nothing to do with me cuz I’m sick with hope.” If you were looking for that one song to get you hype—for your finals, for the end of the work week—“Sick” is absolutely that track. Song was on rotation for about 45 minutes when I first heard it.

The next two songs take a shift in musical direction, being more JYP corny than Crush grown ’n’ sexy. Both are meant to show the playful side of the group, so I understand. However, if I’d heard these songs first, I’d still be in the “non-fan” category. “Fun Boys” is as its title suggests — a song about the boys having fun. There’s most definitely a place for it within the grander scheme of K-pop, but that’s all it is: pure fluff.

“Converse High” is aurally more appealing and its message is admirable: “F your Chanel. F your Alexander McQueen. F your Raf Simons, just come here and check it. You can buy two pairs with just 100 dollars. You know what I want? White T-shirt, jeans and red Converse Highs, that’s it.” It’s a sentiment many of us can sympathize with. We find pleasure in the simple things. After all, that’s all many of us can afford. Cute idea, but let’s be real. If we all had the money (before taking care of a few financial responsibilities) we’d be wont to indulge in some of the worldly decadence a generous cash flow affords. 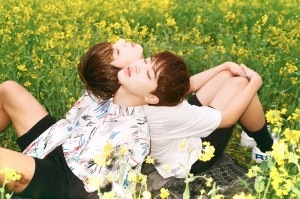 Just when things seemed to take a turn for the cheesy, we’re gifted the track “Move.” It’s a tune that has glimmers of R&B groups from the turn of the century like Ruff Endz (I get a real “Someone to Love You” vibe from this track). There’s so much hope and honest-to-goodness heart in this track: a song meant to give you that ache of a memory, the moments of time when you struggled to get where you are but managed to make it. From childhood to where you are now, every day is a chance to learn, grow, and experience.

The composition, simple as it is—with a few nuances, such as the gleeful squeak of a child’s voice—is perfect for a song that plays on your nostalgia. All the madness of life was a lesson, and now it’s time to move on, taking everything learned and applying it in a way that will take us to the next movement in life’s aria: “Let’s move. Goodbye to this place that we grew attached to. Let’s move now to a higher place.”

Just as Most Beautiful Moment… opened on the grit and gravel of Suga’s proclamation of self-acceptance, it closes on something as soft as a rose petal after a summer rain. “Outro: Love Is Not Over” is a short and sweet lover’s lament. While love has left a sting in our protagonist’s heart, he still yearns for the feeling of it in his soul: “Love is so painful. Goodbyes are even more painful.” The piano foundation helps to cushion the groove of the track, which continues the album’s overall feeling of tenderness. What I appreciate so much about this track is its brevity. Many groups would attempt to smash a rap in just to fulfil the customary three minutes thirty seconds indicative of a pop song. “Love Is Not Over” had a simple message that was delivered with yearning, earnestness, and a lack of bravado. 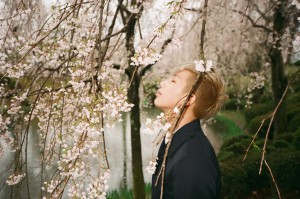 This year hip-hop is bringing so much more heart, pain, honesty and rawness, with a pleasantly surprising lack of pretense. With the poetic perfection of Kendrick’s To Pimp a Butterfly, the genre-bending beauty of MFBTY’s Wondaland, and even the raw elegance of leader Rap Mon’s RM, The Most Beautiful Moment in Life Pt. 1 slots right in there with some of the best mainstream hip-hop of the year thus far. It’s got moments of guttural elegance that punches the listener right in the gut melded in perfectly with their gritty twist on K-pop. What we get is a part one that leaves fans—old and new alike—anticipating what BTS has in store for the second installment.

The Most Beautiful Moment in Life Pt. 1 is a pretty well-crafted piece of music from a group that seems to be hard-set on proving themselves a cut above their K-pop peers who wear hip-hop as a concept for a comeback stage on Inkigayo. If this is what BTS is capable of, then count me as a long-term fan.