Crush Gets Grown ’n’ Sexy for Debut "Crush On You"

After waiting almost two years for a full album, producer and R&B crooner Crush offers Crush on You. The album is most definitely meant to get lovers in the mood for something sweet and a bit naughty. In fact, many of the songs on the album provide the perfect background music for getting intimate. Put it on repeat, and you’ve got the soundtrack to the perfect night of lovemaking.

As most listeners will attest, the opening track sets the pace of the album. So it’s no surprise that “I Fancy You” slinks in with a lip bite and tongue swipe. It’s interesting Crush chose to use the word “fancy,” an almost archaic means of introduction from a fellow on the prowl to the woman who’s caught his eye. From there, there’s nothing subtle about the song, Crush mincing no words expressing exactly what he feels for the lady in question: “Your body is so fatal I can’t take my eyes off of it… My heart has already stopped when I saw you. We have the same goal tonight yeah.”

The next track is filled with just as much sexuality as the former, the only difference being the chorus making use of the thumpa-thumpa late ’90s R&B dance tracks. Lydia Paek adds her vocal to “A Little Bit”, being the perfect feminine counterpoint to Crush’s deeper groove during the verses. While Crush is expressing his desire to take the harmless flirtations a bit further (“I’m only holding your hand but I wanna go deeper, yeah. I’m not young. You can do whatever you want. I don’t wanna get permission, let’s just go with the flow”), Lydia is declaring her affection for the man who she’s ready to give everything to:

There is something to be said about how eager she is to please him, willing to give him anything he wants without him having to even ask for it. One could comment on the ideology of the eager and willing virgin, ready to give her “oppa” everything he desires. The domestic implications of a woman doing as she’s “commanded” wrapped in a song meant to seduce. However, it’s doubtful that’s anything Crush even considered, let alone factored into his creation of the song. But, then, maybe that’s the problem right there. It permeates so much of society that it’s second nature to include it in everyday life, including a love song’s lyrical makeup. The art of seduction used to entice a woman to fulfill her man’s every need can realistically shift from simply consensual sexual intrigue to a demurely submissive wife at her husband’s every beck and call. Of course, much of K-pop is predicated on themes and musical concepts gleaned from pop music in the US and Europe, which is absolutely filthy with songs about the Male/female (spelling intentional) dynamic in relationships. But I digress.

While much of the album’s compositions are of the deep-chocolate, syrupy slow jam variety, interspersed among the Trey Songz inspired grooves, we’ve got hints to ’90s R&B with songs like “Hey Baby,” a nod to early Bobby Brown (“Every Little Step I Take”) with a bit of early K-pop to round out the sound. It’s a basic love song, speaking about how much our heart-eyed protagonist yearns for his special lady: “I really, really want you (baby). Accept my heart (baby). Baby be mine.” Zion T provides the repeated phrase, “Hey, babe. Yeah, babe, MJ, baby,” which is probably referencing the line “Baby be mine”—the title of the second track from the classic Thriller album.

Crush on You continues in the more airy and romantic vein with the Nujabes-inspired “Whatever You Do.” It’s definitely sweeter than all the tracks on the album, instead of going for the goods as soon as his woman walks through the door, he goes for sentimentality and speaking from the heart: “How should I express this? What do you think of this heart and of me? I still don’t really know. But I want to get to know your heart slowly.” 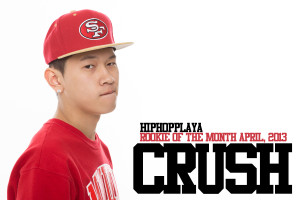 Then the album goes in the complete opposite direction with track “Annoying.” The song makes use of live accompaniment, giving the song a very spring-like hue, which, if the song title is any indication, makes sense for the song’s theme—new beginnings, getting over someone. Throughout he expresses, “I’m fine. I’m good without you.” Interesting, considering the first part of the album was mostly Crush insisting on how much he wanted the girl in question.

The awkward song placement continues through the latter half of the album with the next few tracks. Following Crush’s declaration that he’s okay without his (apparently) on-again, off-again love interest, we have track “Beautiful You.” The song features CHOIZA as well as lyrics insisting Crush’s sometimes lover is the only one for him: “My lady. My lady. I want you. My lady. My lady. You’re the only one.” He takes it further with track “Want,” in which we return to the lovemaking music we heard at the beginning of the album. His yearning croon permeates the track, with lyrics like “Let us be together, it’s free” and “I want you. I want you.”

What’s actually impressive is how Crush manages to mask racier lyrics and themes. Track “Hug Me” is incredibly clever. Perhaps his understanding of the English language has progressed to a point where he understands how certain words have the ability to transform into others if slanted ever so slightly to the left. The refrain is sang in such a way it almost sounds like what I wager Crush actually meant. The almost hushed “h” at the beginning of “hug” and the hard “g” (which in Korean is actually oftentimes sonically interchanged with the syllable for “k”) almost transforms the word and allows Crush to get his point across loud and (mostly) clear.

What would any R&B/rap album be without the requisite party song? That’s exactly what Crush offers with “Friday-yah.” Nothing exceptional here, and nothing we wouldn’t expect from any R&B artist. Again, the placement is a bit strange, considering we’ve already had an intense night of sex and candy with the previous two tracks, but what can ya do about that? With some pretty cliché lyrics like “Let’s bring tonight. Let’s drink tonight,” it’s a pretty underwhelming track. However, the use of Earth, Wind & Fire’s “Beijo Interlude” from their Brasilian-inspired album Ponte de Aeira is actually rather interesting and at least shows that Crush has a pretty decent music vocabulary.

The song that ends the album is a lament about how he misses the one he loves. “Sometimes” is a cute song that makes use of the lighter composition utilized in earlier songs, straying away from the overtly sexual. The sudden shift from proclaiming to be sick of his girlfriend to wanting to get close and even proclaiming his undying love for her and missing her when she’s not around makes me think “Annoying” was just a lapse in feeling, as if he had a disagreement with his lover and is now trying to win her back with some soft words and promises of good loving.

Crush on You is a very direct album, mostly one goal in mind from beginning to end. The album’s definitely sexy, which is obviously the point of an album entitled Crush on You. However, it runs the risk of being severely one note. The type of “grown ’n’ sexy” groove utilized on this album is effective for a song or two, particularly on the latter half of the album. But I wished there was a little more creativity used to express Crush’s overflowing sexuality. That being said, he uses the music to great effectiveness and gives us a glimpse of what we can expect from him in the future. Hopefully that future includes not exclusively relying on syrupy love songs meant to titillate and going deeper than outlining the trials of having and keeping his woman.