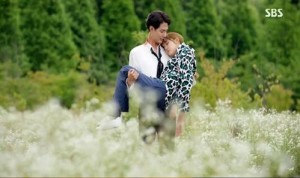 Once upon a time, I used to watch back-to-back K-dramas, gobbling up anything and everything it offered as long as it was packed with good-looking characters. Then I started thinking responsibly, and ended up not watching any for the past three years.

Returning to the K-drama scene after such a long time; however, has not left me disappointed because the current K-drama trend seems to be refreshingly experimental, or so implies SBS‘s It’s Okay, That’s Love with its commendable attempt at dealing with stigma-ridden psychiatric disorders encompassed within a seemingly simplistic story of love and empathy.

Spoilers ahead. Proceed with care.

If opposites attract, then author of best-selling mystery novels, Jang Jae-yeol (Jo In-sung), and exemplary psychiatrist, Ji Hae-soo (Gong Hyo-jin), are definitely not getting together because both of them are way too similar. The former suffers from Obsessive Compulsive Disorder (OCD) and schizophrenia while the latter suffers from sexual trauma — both instigated by external incidents, both diligently ignored. As luck (or any K-drama) would have it, Jae-yeol’s latest novel gets plagiarized by his girlfriend and in a bid to avoid the press  and find a new den to write, he goes knocking on the door of his other house, currently occupied by tenants Hae-soo, cafe waiter with Tourette’s syndrome Park Soo-kwang (Lee Kwang-soo), and Hae-soo’s senior colleague Jo Dong-min (Sung dong-il).

War, peace and love — in no particular order — ensue thereafter.

I want to talk about the first episode in particular detail before I give an overview of the rest three because the first episode is all kinds of awesome. The first episode deals only with psychiatric aspect of the drama and it does so beautifully. The one scene that stands out is when Hae-soo asks the interns on how to proceed with a transgender patient suffering from domestic violence the interns vomit all their rote-learned knowledge on homosexuality, gender identity disorders, stressing on how the patient has done nowrong. Hae-soo retaliates by saying one magical word: depression. Magical sounds odd, I know, but it was so good to see that often caught in a moral paranoia of political issues like homosexuality and transgender identity we forget that fighting sexuality and identity violence all the time can cause extreme depression. Add domestic violence and a sense of guilt in asserting your right, and you have a depression warranting forced hospitalization. 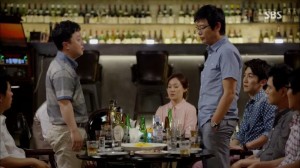 The moment I saw depression being treated as a disease, an inadvertent “Yes!” was my reaction. Even now, people are struggling to categorize depression as a disease since in popular discourse it is still considered a “phase”, as the “lows of life” — not something deserving medical supervision. They also used the “she” pronoun for the patient which made me fall in love with the drama instantaneously. The drama does not deal with psychiatric disorders as political issues but it’s okay, that’s cool because the sensitivity vested in the treatment of these issues makes the lack of other realities excusable.

Within the first four episodes itself, the show brings forward the complexities of psychiatry and the stigma attached to it. While the car chase of a psychiatric patient reflects the urgency and dangers of the profession, the shaming of Dong-min by his friend who is an oncologist — revered and courageous medical profession — shows how psychiatry is generally viewed as an effeminate job — not much blood, not much money.

I am thoroughly enjoying the characterizations! Hae-soo is brilliantly complicated. She is competent, assertive and funny but at the same time, she has her own problems to deal with. Thankfully, she is not all dramatically jaded but instead tries hard to break out of her trauma. Soo-kwang and Dong-min are just perfections, especially Dong-min! He has an ironic sense of humour and the sunbae-hoobae relationship he shares with Hae-soo is enviable. However, I am slightly disappointed with Jae-yeol; he comes off as two-dimensional and predictable. For the time being, I am willing to rationalize it with the fact that Jae-yeol’s character revelation is facilitated by three surrogate characters — Jang Jae-beom (Yang Ik-june),  Han Kang-woo (Do Kyung-soo) and his best friend, Tae-yong (Tae Hang-ho)

Jae-beom, Jae-yul’s elder brother, is one of the more complicated characters in the series. He asserts that he has been wrongly convicted of his father’s murder and that it was Jae-yul instead, who had murdered him. He is out for a bloody revenge but more than anything, he wants the truth to be revealed. His commentary brings out the supposed dark aspects of the arrogant and flirtatious author. 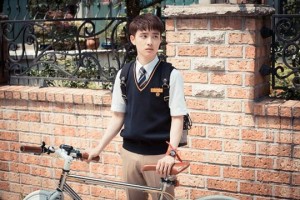 Dark gets darker with Kang-woo, the author’s fanboy, entering the picture. From the beginning, it seems odd that an accomplished author seems to have a soft spot for a fan, and that no one seems to object to it. Incongruities appear when no one seems to know Kang-woo or sees him. Soon enough, it is revealed that he is only Jae-yul’s figment of imagination; his younger self triggered by a schizophrenic attack. Kang-woo’s character hence, becomes very important because it maps the violent and disturbed past of Jae-yul in all its gory details. Two questions arise from this extension of a personality: Is Kang-woo merely an extension or does Jae-yul live, for sometime, as Kang-woo as well?

Speaking of Kyung-soo, he excels at crying. No one does it better than him. His acting is awkward in the first episode; I can almost feel the commas in the script but by the fourth episode, he gets into his character. He completely nails the role of a besotted fan — goddamn that adorable smile! — and develops a significant presence by the time of the revelation. However, said Squishy does seem like Satan sometimes especially, during that uncomfortable stalker scene as he watches his crush’s shadowy undress. That stuff was outright creepy and his half-giddy, half-drunk voice didn’t quite help my discomfort.

Undress reminds me, the drama is replete with sex — the word and the topic. I have never heard the word being uttered so many times within the span of a single episode in a K-drama before. And yes, it’s amazing to see them talk about casually, just flinging the word here and there. There are people like Jae-yul who indulge in casual sex and people like Hae-soo who find it tiring. There are people like Dong-min who get excited while doing “it” during daytime and people like Soo-kwang who get an attack at sighting his doctor having sex. There are people like a teenage patient who take extreme care in drawing exaggerated male and female genitals and there are people like Choi Ho (Do Sang-woo), Hae-soo’s boyfriend, who don’t mind a fling with the younger sister of their girlfriend. Soo-kwang puts all this madness in one dialogue during the football watching party. 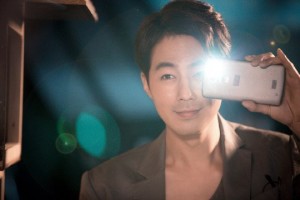 Having said all that, I fear the episodes do take a dip after the first one. It’s finding it difficult to strike a balance between the need for romance and the narrative of psychiatry — the focus on one, completely pushes the other to the periphery. So far it seems that the drama thrives on its supporting cast more than its male leads; more character driven than storyline driven. Even if it de-focuses its attention on psychiatry, I hope it continues to unravel the several complicated relationships, romantic or otherwise, this drama is a treasure of. There are also certain inconsistencies — Jae-yeol’s sermon on consent is almost immediately followed by the traditional wrench-arm-and-slam move, Hae-soo looks uncharacteristically petty when she gets mad at Jae-yeol for revealing Choi Ho’s betrayal, I still don’t know why Soo-kwang lives with them, and for an author Jae-yeol seems filthy rich.

Jae-yeol’s character is obviously going to gain more significance but I seriously don’t want this to turn into one of those dramas where they take a fantastic female lead and turn her into a tool for the male lead’s ‘development.’ As for Kyung-soo, he just needs to smile and I am willing to excuse all his shortcomings.

Am I the only one who feels the last scene of the fourth episode terribly unnerving?