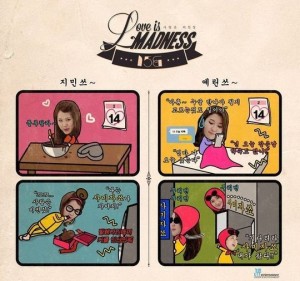 For all of JYP Entertainment‘s teasing hints about a Miss A comeback in 2015, their first girl group comeback of the year actually belongs to the sassy duo 15&. It’s been announced that their latest comeback will be a season appropriate song called “Love is Madness.”

The talented duo’s last comeback was May of 2014, when they released their first full album, Sugar, which managed to snag a spot on our own mid-year Best Album list. With Sugar, the tenacious twosome proved that they’re at their best when they’re allowed to embody their teenage girlishness, and it looks like JYP is continuing that style with “Love is Madness”.

While no video teasers have been released yet, there have been two print teasers released, in the style of a manga or graphic novel. Jimin is happily munching away at a Valentines chocolate she made herself, while Yerin lies that she has a date, when she plans on heading to a show for the happily single. “Love is Madness” looks to be another fun, lighthearted number, and thank goodness for it.

“Love is Madness” will be released February 9. Who’s excited?