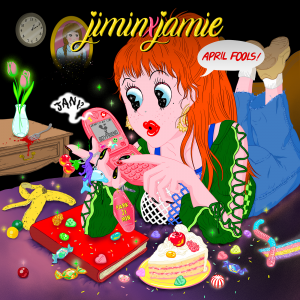 Park Jimin has had a varied career. She was the inaugural winner of K-pop Star, joined JYP Entertainment, debuted as half of duo 15&, became a host of After School Club, and debuted as a solo artist. Sadly, none of these wide range of activities resulted in Jimin gaining critical or commercial success. With the release of her sophomore EP, jiminxjamie, it appears Jimin is taking control of her career with a more personal release — it shares its name with her Instagram handle. But the release itself? It’s . . .fine.

And I really do mean that. If what you’re looking for is moody R&B with solid female vocals, jiminxjamie is a perfectly fine release. It will suit those purposes. But the frustrating thing is that’s all it is. There are so many elements holding jiminxjamie back, things that cannot help but hinder the overall product.

The first major issue is the production. It is hard to define a particular style or genre other than the very broad R&B. jiminxjamie feels very slapdash in the construction of the songs themselves. Honestly, the best word to describe it is “noisy”. There are so many bizarre synth lines, piano riffs, and vocal lines that all crash into each other that the only result is pure cacophony. For a prime example, see “Count Me Out”. Furthering that, none of the tracks have a strong or consistent groove, or even a decent hook. There are a few sticky moments here and there, but none of these tracks make a lasting impact.

The other major issue is the mixing. JYP Entertainment has people who know how to flatter a particular artists voice, but apparently, they were all busy. Whatever intern did the job instead should really consider a change of career. Jimin is known for her potent, emotive vocals. She has range, she has power, her voice is her main asset as an entertainer. Yet all through jiminxjamie, her voice is buried. She is drowned out by the production, which as previously established, is messy and haphazard. There are points where she is barely audible under the sloppy instrumentation. “April Fools” is really the only choice for a title track, as it is the only one that places her voice front and center. Not surprisingly, it’s also the best track on jiminxjamie. 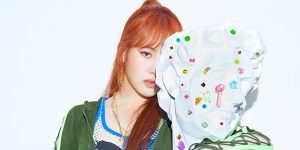 As for the vocals, they are solid on a technical level. Once again, Jimin’s voice is stunning. However, the themes of jiminxjamie do not play to them. Jimin is at her best with bright, sassy vocals. Dour is certainly not a good sound for her. And yet, dour is what jiminxjamie is. Over and over, we have themes of dysfunctional relationships wherein Jimin is ignored, dumped, and just done wrong.

Whether pining, lamenting an ex who wants her back — and she’s still not over him — or being flat out ignored, jiminxjamie is a mini of pure misery. There’s nothing wrong with that, but these topics are not exactly new, and not much is done with them. They’re just generic sad love songs sung by a powerful vocalist. “Pick Up The Phone” certainly has potential, as Jimin, Woodz, and Nathan try in vain to get Pentagon‘s Kino to answer his phone, calling him out on being all over social media while still ignoring their calls. It’s a biting satire of modern communication that is undercut by the absolute lack of chemistry between all four of them.

All in all, jiminxjamie is serviceable. It is a decent piece of dark R&B, with Jimin sounding good as always. But there are so many points that could have made it good, if not great. Instead, substandard production, atrocious mixing, and a flawed choice in themes kept jiminxjamie from reaching its full potential.