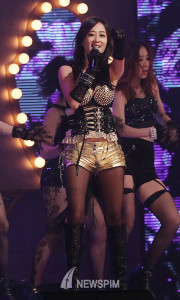 The K-pop industry has lost another beautiful voice. Joanne Lee (birth name Lee Yeon-ji) has passed away on December 2 at the age of 26, according to reports. The former singer was involved in a car accident on November 26 in Los Angeles, where she had been living and working. She was sent to the hospital immediately after the accident in an unconscious state, and passed away one week after.

Newer K-pop fans may be unfamiliar with her name due to her long absence from the music industry. Joanne debuted in 2001 at the age of 13 with the album Joanne 01. In addition to her young age and vocal talent, her song “Good Day Sunshine” gained her much popularity, and she at one point was named the “second BoA.” However, a few years after her debut, she left the music industry to live in the U.S. due to family matters.

Joanne made a surprise reappearance in 2012, on Mnet’s Superstar K4, the clip of which has been resurfacing since the news of her death. Images of her and her friend Ha-neul have also been gaining attention online. The latter, who had promoted at the same time as Joanne, also passed away last year due to sickness.

Rest in peace, Joanne. We offer our condolences to her family and friends.