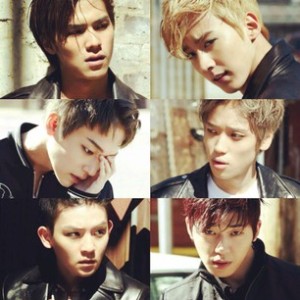 For those unaware, sajaegi is the practice of mass buying albums to increase sales on various music sites. While this sounds like a pointless venture to some, the idea behind the act is to gain popularity for a group by helping it win music show awards.

Many times, the awards are based off of album sales, so a win implies that a particular group is popular and in demand. Teen Top is not the only group to have faced such allegations, but like plagiarism, the idea behind anyone using sajaegi to increase sales is frowned upon.

During Teen Top’s “Missing” promotions, 2pm member Jun.K created controversy with an ambiguous tweet that flared up a fanwar between Hottests and Angels. Taecyeon attempted to quell the storm by requesting that both sides peacefully quiet down, but clearly, some netizens were not satisfied. Neither Top Media nor JYP Entertainment issued statements on that particular matter, so accusations appear to be fueled by angry fans, at the very least.

Top Media offered to drop the charges against the netizens spreading the rumors if they wrote a formal letter of apology that included admission of their wrongdoings. No official update regarding the outcome has been released as of the writing of this article.