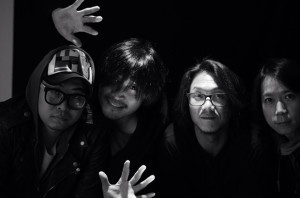 From the hustle and bustle of Seoul comes a band that’s managed to capture the sounds inherent in the ever-expanding capital city. Hanumpa came on to the scene fifteen years ago and have managed to create music that’s unpredictable, powerful, and as vibrant and diverse as Korean culture itself. Comprised of lead singer, guitarist, and morin khuur player Lee Jeong-hoon, guitarist Yoon Soo-yeong, drummer Kim Yoon-tae, and bassist Song Hyun-jo, Hanumpa is most akin to a surprise party: shockingly unexpected.

Their music can best be described as soft alternative punk. Indeed, while there isn’t any of the sugary sweetness of pop-rock, there’s certainly nothing severe in the sound. Their first EP, 5th Plan, attests to that. There’s energy and excitement in the sound, but there’s also a gentle coo in the ear with much of the composition—a fact illustrated in the EP’s first track “The 5th Plan from 2 Million Light Years.”

Flu, their first full-length release, delves further into this play on hard and soft. Opening track “Invitation” instantly provides an almost erotic intersection of rock and traditional Asian composition, Jeong-hoon carving up the rock sound with his morin khuur. The album is as versatile as the band’s core sound, not just one thing, but branching out to include the mysticism of Malaysian instrumentation as well as the dreamlike nature of alternative rock. While title track “Flu” errs more on the side of more commonly structured punk, “Weightlessness” delves deeper into that more magical sonic experience, with an introduction that’s heavily constructed around the morin khuur and the wistfulness of Jeong-hoon’s vocal.

Hanumpa’s debut LP was an inspired piece of music that brilliantly captured the range and depth of the band’s musical makeup. Their seamless ability to cross the generational divide between traditional and modern was no doubt a startling surprise when they first appeared on the punk rock scene in 1999. But the ability to fuse sounds from multiple Asian cultures and musical dialects has given the band the ability to experiment and create some truly beautiful music. Flu was remarkable because as a band’s first major step into public consciousness, it was a bold assertion of arrival. Being at once a powerful statement of their rock inclinations and a comforting breeze on a warm day, it left a deep impression and anticipation for the musical direction of the band in the future.

A glimpse of their ability to adapt and expand musically made itself known with the band’s next full-length album, the aptly titled Kiss from the Mystic. Taking bits and pieces from ska and, of course, the traditional compositions of Malaysia and Korea, the album exceeds even the expansive nature of Flu’s musical landscape. As diverse a soundscape as Flu was, Kiss from the Mystic adds a brighter flavor on tracks like “Whistleblower” and “Urge.”

The addition of songs that have an aggressively energetic cut to them further distinguishes the group as more than just a rock band with psychedelic tendencies. There’s a euphoric playfulness in the music, something untimid and brazen, yet it’s soft enough to embrace any listener who’d give the band a chance. The leading track from Kiss from the Mystic is the perfect vehicle to capture this dichotomy of rough and tender. “V. L. S. (Vampire Love Song)” is cheeky fun, punk rock elements heavily infused with ska riffs and composition. It’s a lighthearted and tender track that defines the album’s core musical flavor—energetic and uninhibited. 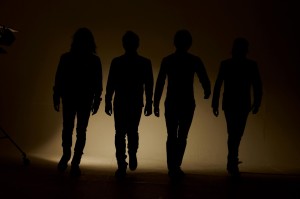 While not a strict departure from their earlier music, Kiss from the Mystic works as a means to introduce a different side to the Hanumpa sound. Tracks like “Fossil” and the album version of “Domino” were emotional songs that managed to both intrigue and pierce through every bit of a listener’s armor and penetrate the heart. Fans and newcomers alike were gifted an album that while building on the momentum of Flu’s makeup didn’t set out to recreate it in an attempt to offer a part two to the debut. It’s an album apart and further illustrates the band’s desire to press for something deeper, a sound that’s both familiar and detached from what many may have ever heard.

With the release of their third full-length album Tinnitus, the band has cemented its place as one of the most sonically creative rock bands in the past few years in South Korea. The album’s title is fitting. Hanumpa has a sound that rings in the ears long after the final note of each album has faded. Lead single “Acrobat” gives us more of what we’ve come to expect from the band’s musical journey. It’s a pulsating rock track that soothes the throb with the soft coo of Jeong-hoon’s morin khuur.

Tinnitus is just further proof that Hanumpa has created a sound uniquely its own: an inspired piece of rock effortlessly interwoven with psychedelic love notes to the traditions embedded in the band’s vibrant culture.

Readers, what do you think of this group’s play with the concepts of hard and soft?