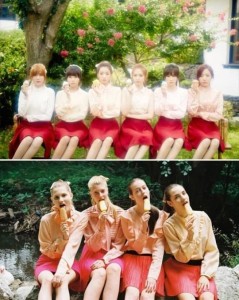 There are many damaging words thrown around in entertainment, but none is more blasphemous than the word plagiarism. It invokes a belief that the one accused of it acquired an idea by stealing from another. Furthermore, it damages the image of the accused artist who must now defend against such allegations and either prove it was mere coincidence or confess to copying.

Weeks ago, A pink found itself under fire for concept teaser photos resembling the work of photographer Michal Pudelka. At first glance, one may brush off the comparisons, but some questionable similarities allow for reasonable pause. The light-colored ruffled blouses with red skirts match. The leaning poses with confectionery props look familiar. Even the soft-filtered composition appears to be mimicry. Naturally, it’s not as if the group had any input regarding the concept for the photos, but, given that is not the first time they’ve been accused of copying, it is damaging to their reputation. How can anyone accept them as being authentic if their ideas are constantly being labeled as rip-offs of someone else’s work?

The entertainment field is littered with various artists competing for more fans, so the pressure is on to standout from the crowd. Sometimes this means ideas become recycled, leading to copycat accusations, but what exactly defines plagiarism? How does one separate a series of cliched, overused concepts from deliberate attempts to steal another’s work?

To begin, let’s define this word. Plagiarism is the practice of taking someone else’s work or ideas and passing them off as one’s own. This is a broad definition of the word, which is why it is difficult to pinpoint what it is. A better association for the word would be the term copyright infringement. When articles pop up regarding plagiarism, what is really being discussed is the infringement of ideas from one’s copyrighted work.

Sometimes, artists have little knowledge of copyright laws in their countries, so they assume that using ideas from someone else is allowable under fair use. The fact is that when the original artist is not given credit, then it becomes infringement because people now viewing that content under the plagiarist assume that the plagiarist is the original creator of it. Credit must always be given, hence all those helpful links you see at the bottom of every Seoulbeats article. We have to credit to our sources when we are not the original source for pieces of information provided in our articles.

If you are still confused, you are not alone because many fan wars are the result of these misunderstandings over copyrighted material. The thing is, not everything can be copyrighted. Some ideas are so general in scope that they are best referred to as cliches. These are the recycled ideas mentioned earlier. The best example of this is filming styles like the one-take. Some fans debated whether Taeyang‘s “Ringa Linga” dance performance MV was a rip-off of Exo‘s “Growl” MV. Many cited other MVs using the one-take method as examples that Exo did not invent the style, but some were sure this was pure plagiarism. Take a look at both MVs and see if you can find any similarities.

So did Taeyang copy Exo? The answer is no. The one-take style is a widely used method of filming that predates the birth of many K-pop idols; in fact, director Alfred Hitchcock is credited for popularizing the style with his movie The Rope. There are numerous examples of this style in not only MVs but also television and films. It’s not copycatting if it’s a concept or idea that is generally used by the industry. This extends to things like dancing with chairs (Flashdance) or wearing school uniforms (Britney Spears) or any number of cliched ideas that have been reused by artists over the years. Even the examples given are not the original proprietors of those concepts. 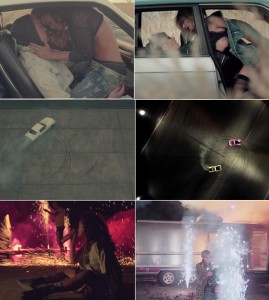 Going back to the copy argument, there are times when the origin of content is questionable enough to warrant suspicion of plagiarism. This was the case with Trouble Maker‘s “Now” MV. Certain shot sequences of “Now” came under copycat allegations because of similar scenes from Rihanna‘s “We Found Love” MV. Although the concept of lovers in a destructive relationship is not an original one, the problem here lies with how the idea was executed.

The car make-out scenes were very alike in their composition, from how Trouble Maker was propped inside the vehicle, down to the angles in which they were shot. The overhead shot of a drifting car is more likely a cliche since that has been depicted in many action movies, but the fireworks celebration scene could’ve been swapped out for something else.

As this was more of a controversy among observant netizens, nothing resulted from the taboo faux pas, save for some harsh comments blasting the director. Even though these are just a few scenes, that does not justify copying another’s work for one’s own. The scenes aren’t particularly interesting, so the reason behind the copycatting is even more puzzling because the director could’ve shot the scenes differently. The director performed a disservice to Trouble Maker by using another director’s ideas as opposed to thinking more creatively. Although we want to protect our favorite artists from being plagiarized, we should also bear in mind that not all artists are innocent bystanders either.

MVs are not the only ones caught up in plagiarism controversy as it can extend to television series as well. The writer of You from the Stars, Park Ji-eun, faced a lawsuit from the author of a comic called Sul Hee. The author, Kang Kyung-ok, claimed Park Ji-eun copied the ideas of her work for the popular show. She alleged the idea of a 400-year-old alien living on Earth and falling in love was her original idea, but Park Ji-eun claimed no knowledge of the author’s work. HB Entertainment ended up settling matters through mediation with Kang Kyung-ok, but that does not mean the story was plagiarized.

Details regarding character traits and story lines are key in cases involving written work, so basing allegations that it was plagiarism based off a couple of generic similarities does not constitute it as so. That would mean every fairy tale ever written was plagiarized for featuring a girl in love with a prince. There are tons of stories with that same story line, so it’s not unique. Unless the story details contain strong enough similarities to justify the accusation, it is difficult to say if the author was wrong. One would have to compare both the comic and the show for a fair judgement of the situation.

As fans of Korean entertainment, we should take care not to jump to conclusions when lack of sufficient evidence doesn’t justify plagiarism accusations. However, that means everyone working behind the scenes needs to stop hiding under the guise of ignorance as an excuse too. The best thing these Korean companies can do for their artists is hire creative minds who are fairly knowledgeable of intellectual property laws if they wish to avoid embarrassing situations like A pink’s. It’s not fair to their artists or the fans when plagiarized work is presented, so let’s encourage more care with copyright in order for more authentic entertainment to thrive.