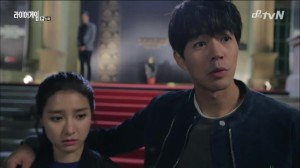 In episodes 5 and 6 of Liar Game, we get the perfect balance of everything good in this drama. Episodes 1 and 2 did a great job of introducing characters and motivations as well as setting up an interesting long-term plot, but the game was a bit lacking and Do-young, while creepy, was not that threatening. 3 and 4 had an amazing game and showed Do-young’s capabilities as a manipulator but had no character development or advancement of Woo-jin’s investigation into his mother’s death. Here, though, we get a taste of everything. It’s a smorgasbord of competent writing!

These episodes manage to service every plot thread and advance or delve into the lives of not only the main characters but also a huge chunk of the side characters. They do it by breaking one of the staples of Liar Game thus far: Woo-jin and Da-jung split up. As Woo-jin was eliminated from the game due to surrendering his portion of the last round’s prize, Da-jung is left on her own for an episode and a half while Woo-jin digs into the game as a whole. More accurately, he digs into the shows connection to L Company — the very same one he bankrupted one year ago.

Woo-jin learns from Dal-goo that Da-jung’s father lost everything investing in L Company. He looks into the other contestants and learns that many of them also have connections to L Company, including Min Jin, aka Not Relevant to the Plot Woman from last week. Whoops. Turns out, she’s been abducted. When Woo-jin investigates, he learns that her abductors had something to do with that same company … right before he is put in a death trap mirroring the one that he put L Company’s CEO in.

Normally, I hate the “It’s a small world” trope. It’s a lazy and hackneyed way to connect characters and very often falls apart if you think about it for thirty seconds. That said, I love its use here because it actually makes sense. Woo-jin destroyed a large and profitable company, with employees and investors, and they went down with it. When he learns that Da-jung’s father lost everything in that crash, it forces Woo-jin to realize what he’s done. This sweet girl, whom life has shafted and who has wormed her way into his heart, is only in her current position because of him. While many dramas portray revenge as beautiful and worthy, Liar Game makes it clear that actions have consequences and, more importantly, collateral damage.

Meanwhile, back on reality television, Da-jung is forced to compete on her own and faces predictable results. It’s one thing to get manipulated by someone you trust, but she gets played by Jamie the chess master. It’s a bit painful to watch, honestly, and the game portion’s plot drags. However, the character development that the slower game allows is spectacular. First and foremost, Da-jung lies. 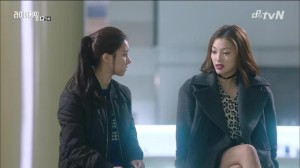 While Woo-jin is the one who snuck onto the set and came up with the plan to prevent her elimination, Da-jung is the one who has to implement it. She has to manipulate every other person to succeed. And she does, with only a little convincing. Woo-jin reminds her that she offered everyone else a chance to form a team, guaranteeing them all enough cash to survive, but they turned her down. Woo-jin posits that they should have to pay for that, and Da-jung concedes his point and lies her ass off. Da-jung has taken her first step towards being nice without being a doormat.

Woo-jin and Da-jung’s relationship makes some progress here as well. Not only does Woo-jin learn that he is directly responsible for her poverty, when he asked Da-jung about how she’d feel if she met whoever was responsible for her current life, Da-jung — sweet fairy princess of nicety and trust — says that she’d hate them forever. Woo-jin doesn’t reveal the truth, instead, he becomes much more dogged in his desire to help her. But is it out of affection, a desire to see his new friend happy? Guilt for putting her in poverty in the first place? Or an attempt at preemptive atonement, a way to make it up to her? No matter what the reason, he is firmly in her corner, declaring himself on television as nothing more than Da-jung’s faithful and vicious dog.

These episodes also give some much-needed love to Do-young and PD Lee. The two of them are shaping up to be nice foils to Team Da-jin. We have two men with crazy skills in finance and reading people playing a complicated chess game and their more moral female buddy who’s just trying to survive in a harsh world. Yet, while Da-jin trust and genuinely like each other, Do-Lee is hampered by Do-young constantly failing to confide in PD Lee and PD Lee clearly having the same basic reaction to Do-young as everyone else: if he gets within three feet of you, KNIFE HIM. 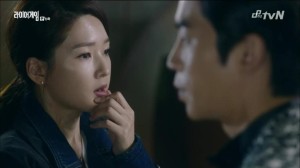 Do-young is an odd villain in dramaland. He hasn’t done anything. Sure, he’s creepy and drinks rare wine like it’s nothing, but all he’s done is manipulate people on the same level as Woo-jin. He just gives this vibe that, every time he breathes, he’s twisting the world to his benefit. Do-young’s like a reincarnation of David Xanatos, and that makes him all the more effective as an antagonist. We the audience aren’t fed up with our protagonists’ inability to outmaneuver him because, right now, we couldn’t either. We don’t even know if he is a bad guy — we just suspect it. And it’s glorious. I only wonder if Do-young is familiar with Xanatos’s ideas on revenge.

The best thing about Liar Game‘s writing is that Liar Game has managed to do the one thing that dramas never seem to be able to do: overcome the pop culture bubble. The world they live in feels very real, and people in it act like real people. Da-jung is the typical drama heroine. While most dramas portray these characters as unliked by the masses, this one lives in reality: Da-jung is the star of the show. Everyone else has one or two fans; Goddess Da-jung has hordes, fanchants and photo shoots. She is, to the fictional audience, a drama character brought to life. Sweet, plucky, but unlucky, with a handsome, brilliant yet cold man willing to do anything for her? What netizen wouldn’t support — and ship — Da-jin?

We also get another take on Liar Game‘s theme of “Permeations of Trust.” So far, we’ve had 1) Never Trust Anyone and 2)Sometimes, Trust is Necessary. Here, we get 3) Trust With Caution. Woo-jin provides the harsh side as he believes that anyone who betrays you needs punishment, while Da-jung provides rewards to those who don’t. It’s fascinating how many ways one thing can be reinterpreted.

I’m really loving this drama. It’s edgy, thought-provoking, and willing to break the rules of conventional dramas. Moreover, it’s habit of giving us answers without the questions is addictive. What does L Company have to do with the game? How is Do-young involved? Will Da-jin become real? More, please.