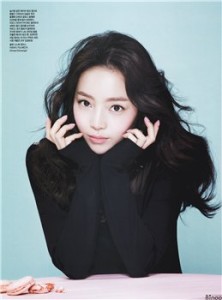 Goo Hara will be starring in a new solo reality show called Hara On & Off, set to air this December. The program will follow Hara sans KARA as she goes about her activities and daily life. MBC Music, the cable channel behind Hara On & Off, has stated that the program will take a more personal angle to reveal a more honest and “human” side of the entertainer.

Hara has been previously spotted filming at a surprise fan meet event at a movie theater, and these scenes will be included in the reality show whose coverage spans the course of two months.

It’s been a busy year for Hara and the rest of KARA, as the members have just wrapped up their third Japanese tour. Hara’s recent guest appearance on Roommate 2 was received quite positively, and it seems news of her solo show is being met with a similar show of support from netizens.

While no air date has been released yet, the show is set to air by the end of this month. What do you think, readers? Will Hara On & Off be worth watching?