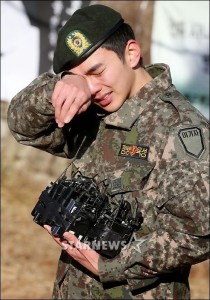 Good news for all drama fans out there. Yoo Seung-ho, the young heartthrob who grew up in the celebrity spotlight, has been discharged from his military service as of 4 December 2014!

Yoo quietly entlisted in the military in March 2013 without much fanfare, an act that garnered praise from the public. While most male celebrities tend to enlist in their late-20s in order to build up a solid career foundation before disappearing from the public eye, Yoo chose not to do the same and enlisted at the same time as his peers.

He stated that he didn’t feel celebrities deserved special treatment since everyone is equal in the eyes of the military. Indeed, a mature and commendable attitude, especially after a string of celebrity recruit scandals.

At his discharge ceremony, Yoo was unable to hold back his tears upon seeing his fans who waited for him.

I’ve learned a lot and gained a lot of memories throughout the past 1 year and 9 months. It became a time for me to think about my future. I am sorry that I couldn’t say a proper goodbye to my troop leader, and I am thankful to my succeeding soldiers who followed me well… I will be an actor who gives happiness to others. I hope that someone becomes happy through my production.” 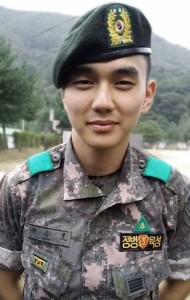 As one of the up and coming lead actors, Yoo has been courted by many drama and film producers since October. He announced that he chose Joseon Magician as his comeback project, a historical film about the romance between a circus magician (Yoo), and a princess (Go Ara still considering). The two years away in the military definitely helped shed his child-actor image a little more, so fans can definitely expect to see him in more leading roles from now on.

He will also hold a fan meeting with 500 fans in Korea on December 21, and will go on to meet fans in Tokyo, Japan on December 24-25. His military service fortunately put him in a beneficial position in terms of public opinion, since there were numerous articles about his hardworking and humble attitude.And considering his lengthy resume and years of acting experience, his absence certainly made everyone’s heart fonder and itching for his comeback.

It’s encouraging to see a child star grow up with his head screwed on right, and I can’t wait to see more of Yoo Seung-ho. Anyone else excited?