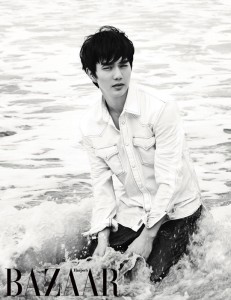 In a somewhat surprising move, actor Yoo Seung-ho entered the military on March 5th at a base in Chuncheon–with no fanfare, no media blitz and only his family and some agency representatives at his side.  It was well known that the 19 year old actor would begin his 2 year military service this year as there were many reports that his last drama before entering would be I Miss You, that he was turning down CF offers because he would be entering the military, and that his last photo shoot was with Harper’s Bazaar in Hawaii, but there was no indication that he would be leaving so soon. Although his agency was very discreet and indirect when answering questions posed to them about Yoo Seung-ho’s military enlistment.

Yoo Seung-ho notified fans of his departure into the military through a video posted to his fan cafe Talk To You after he had already entered his base camp.  In the brief message he told fans,” “I enlisted on March 5th without telling you all. I’m greeting you through this video. I’ll return safely.”  According to his agency,  “No one knew of Yoo Seung Ho’s enlistment. He thought he should enlist quietly because everyone’s the same in the military. There shouldn’t be special treatment for celebrities.”

It was a savvy move on Yoo Seung-ho’s part, whether it was his own decision or a PR move considering the backlash over celebrity special treatment in the military after the Rain & Kim Tae-hee scandal. How a celebrity handles their entry into the military is really their own choice and I don’t see having fans there to see them off as a total no-no (save for a couple celebrity send offs that were a few steps short of a carnival act).  Even Hyun Bin was sent off by fans, but it was the handling of his PR while in the military with just a few well placed articles and no overt acts of celebrity that caused many to consider his stint in the military as commendable service while others are… not. I will say that I like Yoo Seung-ho’s choice of send off the best–something small and intimate with loved ones.

His choice to enter at the age of 19, an age when most other Korean males serve, was also a wise decision on his part in my opinion. In the past I have read interviews of celebrities who joined in their 30s finding it a bit difficult taking orders from a 20 year old sergeant.  And even though Yoo Seung-ho leaves now while at the top of the acting game, his work as an actor has been so vast that I don’t think fans will forget him after a mere two years.  When he gets out he’ll only be 21 and should be more than ready to move into the next phase of his already illustrious career.

Best of  luck to Yoo Seung-ho. Be healthy, stay safe, and serve your country well.  We’ll be anxiously awaiting your return.