Hyung-don & Dae-jun’s Hitmaker will be airing its second season early next month, according to a video teaser released on November 12. This news, comically conveyed through a large bottle falling out of the sky, signifies the comeback of idol project group Big Byung.

News of a second season beginning filming was first announced back in October, and despite Jung Hyung-don and Defconn’s joking on Weekly Idol that they wanted to do the second season with a girl group, the broadcasting company has stated that Big Byung’s producers and members have kept in touch, and all will be returning in the new season.

Formed in the show’s first season, Big Byung is a four-member boy group produced by Jung Hyung-don and Defconn. Its members consist of Jackson from GOT7, Sungjae from BTOB, and N and Hyuk from VIXX. Their group name, a play on Big Bang, literally means “big bottle,” which explains the props used in the MV of their first title song “Stress Come On!” and also the video teaser above. Both the show and the group had received positive responses after the airing of the first season this summer, which lasted for only four episodes. 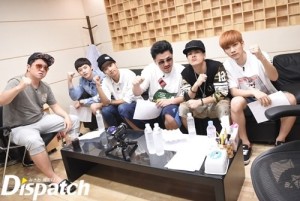 As a viewer, I’m hoping that in the upcoming season, the song produced compromises the talents of all the Big Byung members. Their new title song could have some vocal parts for the sake of N, the only non-rapper in the group, which would not only spare him from having to rap (his first monotonic attempt to do so in season 1 was hilarious), but could present a different side to their music as well. However, I hope that Jung Hyung-don and Defconn’s distinct style, which came through in Big Byung’s debut song, is retained in the future songs they produce.

While fans want to see the group do some official promotions this time around, such as performing live on music broadcasts, it’d be great for the show to, on the whole, keep its un-serious approach to creating a “hit” group. This casualness, along with the cast, is what makes the program humorous and a worthwhile watch.

Are you looking forward to the return of Hitmaker?