A Run of the Mill Apology: Teen Top's "I'm Sorry"

Teen Top continues their transformation toward a more mature image with their most recent single “I’m Sorry.” The anticipated track and music video, released as part of the repackage album Teen Top 20’a Love Two Exito, attempt to demonstrate a more suave and grown-up side of the boy group. Yet, no matter how much maturing Teen Top does, it seems Niel is always destined to have most of the lines — and some variation of a bowl cut.

The MV begins with a white Porche in an abandoned warehouse. The camera cuts to Changjo exiting the car while looking forlornly upon his female passenger. (Fun fact: the girl is none other than L.Joe in a wig — and stockings). After Lady Joe struts away, Changjo wanders to another, slightly more damp warehouse and begins lamenting his loss with a strut of his own followed by some sweet choreography as the track begins. 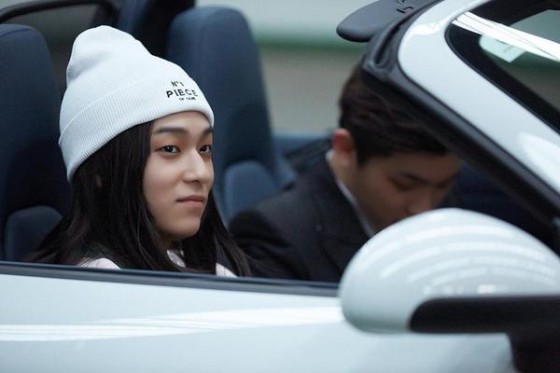 The MV is remarkably stripped down and non-narrative, which is a sharp contrast to the overcomplicated “Missing” released in September. The boys dance in various warehouse settings and interact with one another as they transfer lines in the song. The props remain relatively limited (perhaps they used them all in “Missing”?) and the bare set allows viewers to focus on the individual members. Yet, C.A.P. manages to rap with a Doberman and Niel leans on a questionable (and most likely also damp) tattered couch.

Visually, the MV sticks to the simple contrast of black and white. The main cut of the MV, with the entire group dancing on (height equalizing) crates, is dark and grey with the boys in black suits. The clean-cut boys contrast well with the steamy, grimy warehouse backdrop. Additionally, the sophisticated styling of the boys matches well with the smooth tone of the R&B track. The individual cuts alternate between a black and white backdrop as well as the hallways of the warehouse.

The most impressive shots of the MV are the those of various dancing members overlaid on the suit of another member. While some shots and sets flow effortlessly into one another, others feel staggered and choppy. This is most noticeable during L.Joe and Niel’s scene towards the end of the video. There are also quick flashes of the boys in casual white outfits near the end of the video that are quite out of place and contradict the tone of the MV. 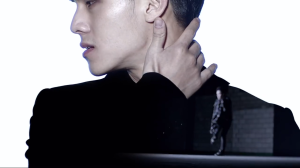 If there’s one thing I’ve come to expect from Teen Top MVs, it’s excessive pelvic thrusting and/or body-rolling. “I’m Sorry” instead chooses to feature more ‘mature’ choreography, which translates to a lot of hand-dancing and leg slide-y moves (there is only one pelvic thrust, one).

Yet, the boys still impress with their synchronization; and it is disappointing that the choreography of the track will not have the chance to be showcased on music programs through promotions because the choreography is “I’m Sorry’s” greatest asset. The moves themselves are simple, but they are executed with a finesse that is exemplary of Teen Top dance quality.

Lyrically, “I’m Sorry” is nothing stupendous. The group is lamenting over causing a rift in their relationship with a girl. While comparing your girlfriend to a noisy air conditioning unit may not be the best way to win her back, the lyrics nonetheless demonstrate maturity. The boys are stepping up and taking responsibility for their actions, asking for a chance to discuss what went wrong, instead of pointing fingers at the girl for causing a scene. The final falsetto notes of the chorus match well with the pleading nature of the lyrics.

There is no problem with us, we just need to talkNothing can tear us apartYou didn’t do anything wrong so please don’t be angry anymoreI only have you

Niel and Changjo carry most of the track vocally while Chunji handles most of the falsetto and ad-libs. It’s frustrating that Changjo’s vocal growth resulted in the diminishing of Chunji’s lines as opposed to a more equal distribution of vocal parts between Chunji, Changjo and Niel. At times it feels like Teen Top tracks are more ‘Neil and the back-up vocalists’ than a group track. While “I’m Sorry” certainly is progress from the early days of “Clap” and “Crazy” in which Niel carried most of the vocals, Teen Top’s producers seem reluctant to let go of Niel’s vocal domination. 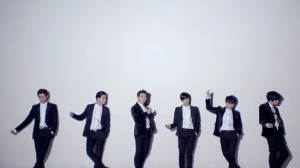 Four years into debut, Teen Top is definitely moving away from their electronic, high energy singles of the past. While part of me is overjoyed that I can sing along to “I’m Sorry” without jumbling nonsense in lieu of lyrics a la “Crazy” and “Super Love,” a part of me feels disoriented with the change of tempo.

Teen Top is maturing physically and vocally, but it seems they are struggling to maintain a distinctive sound while also transitioning to a more mature image. “I’m Sorry” is clean, simple, and unfortunately, all too formulaic. The R&B track lacks a distinctive hook and instead relies on a familiar backtrack and excessive snapping for rhythm.

While I can’t say I’m disappointed in the MV or song themselves (I could watch Changjo’s intro solo all day), I can say that they are both simple and clean to the point of being unoriginal. There is little about the MV that I will remember aside from the single pelvic thrust and the random Doberman.

Perhaps the MV is meant as more of a gift to fans, as the group has already announced they will not be promoting the track. In that case, it makes sense that Top Media limited the budget for the MV: from casting L.Joe as the female lead to the simple warehouse set.

At the end of the day, “I’m Sorry” feels like little more than a generic apology.

Readers: How do you feel about “I’m Sorry”? Do you feel Teen Top is successful so far in transitioning into a more mature image?