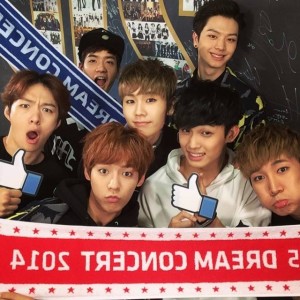 Last night in Seoul saw the celebration of the 20th Dream Concert at the Seoul World Cup Stadium, with over 30 groups making the line-up.
Unfortunately, I didn’t catch a livestream — I’m meant to be studying for exams — but did you? What were your highlights of the night? Let us know in the comments!

Social media joined in on the fun, with commemorative photos of idols on SBS MTV‘s official instagram account, among the usual flurry of fan accounts, previews and fancams.

The biggest controversy, so to say, to come out this year was an alleged mass exit of fans during SNSD’s performance as the last act of the night. As someone who has left many a dance recital early, I’m not really in a position to judge: but what do you think of this? If you ask me, it’d be a better use of time to marvel at the idols all displaying the back of the towels so that the text would read the right way in the photos… Well, most of them.