U-Kiss Take Nasty to a New Level in "Don't Flirt" 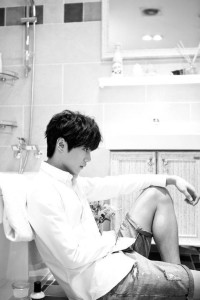 U-Kiss, our favorite underdogs, have returned to K-pop with a sexy concept and a new member. Hilariously enough, that new member, Jun, is underage and won’t be able to watch his own debut MV. Ah well, that’s what you get for being born in 1997. It’s not something you often see, but this MV is rated 19+ for its sexual content and, boy, is that rating ever accurate. Fan girls will want to hold on to their hats for this one because this goes beyond your usual ab-flash. The song is titled “Don’t Flirt” and yet the entire MV is made up of flirting and flirty dance moves.

While some people may try to condemn “Don’t Flirt” for being another sexy gimmick, like Stellar’s “Marrionette,” the MVs aren’t the same. “Marionette” had poor camera work, ridiculous gimmicky choreography, and “sexy” shots such as the milk drinking moment that had literally no context whatsoever.

On the other hand, “Don’t Flirt” is artistically filmed, has quality partner choreography, and the entire MV is based around sex which means every sexy shot is perfectly in context. U-Kiss isn’t even shirtless or crotch-grabbing – the usual boy group sexy gimmicks – and the whole rendition is within context. Having a sexual concept doesn’t automatically make a comeback a “marketing ploy” – you have to actually analyze the content before making that sort of judgement.

Now that I’ve said that, I have to warn you about what is to come. On the surface level there are so many things done well in this MV. The song is sexy and smooth, the choreography is creative and sensual, and the men of U-Kiss look gorgeous. However, that isn’t all there is to analyze.

If you want to keep enjoying this song and MV with no strings attached, don’t read any further. You aren’t required to over-think things; this is K-pop after all and it’s about the feelings and aesthetics above everything else. Being a fan can be difficult, so if you just want to leave now with the happy thoughts of how hot the members look, no one here will ever know. You’ve been warned. Feel free to jump to the end to see the rating. 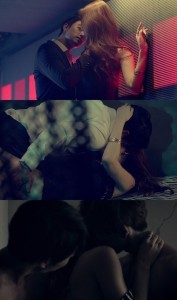 Now, on to the dirty stuff. This MV is sending some mixed signals; the message in the lyrics, in correlation with the MV, is amiss. Let’s start with how the man’s point of view differs in the two instances. In the MV, the men are amorously pursuing the opposite sex. In the case of the woman with Hoon and Kiseop, she’s playing hard to get and creating her own boundaries, but the woman with Eli is equally in control of her situation and is making a choice to seduce him. The men are clearly into it and both pairings end with sex – yes that is what happens, Eli isn’t smoking that cigarette for fun.

The lyrics are largely disparate from the MV’s view of sexual encounters. The lyrics are all about a man being jealous while the MV shows the man as participating in the sex. Honestly it is the lyrics that are most concerning about this comeback song. While no one wants to be cheated on, it’s also over-kill to call a woman “nasty” and promiscuous because she puts on a short skirt and red lipstick. What era are these songwriters living in, the 1800s? The MV doesn’t actually explain the story of the lyrics, so we’re left without a context for the man’s anger. 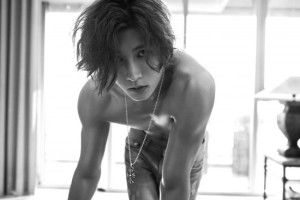 Is his girlfriend actually cheating on him? Or is he the jealous type who can’t handle another person looking at his girlfriend? Especially concerning are the lyrics “I’m warning you” connected to the title “Don’t Flirt.” Apparently this is a case of don’t flirt, or else — thanks for the implied domestic abuse, guys. Combine that with the fact that the lyrics imply that men just can’t help themselves when women look sexy, and you’ve got a nice cocktail of sexism, double-standards, and rape culture.

Of course, that isn’t what U-Kiss or even the songwriters were going for — we’re sure — but by combining these lyrics with this MV, they’re equating the man’s view of an inappropriately promiscuous woman with the image of a woman in the MV, who isn’t doing anything other than being sexually active on her own terms.

If the female lead has a husband or boyfriend waiting at home for her, then yes, her behavior would not be the most admirable, but within the context of the MV, she appears to be a single woman who enjoys being a sexually active adult who engages in consensual activities with other adults. Everyone in this MV clearly knows what they’re doing so it doesn’t make sense for the lyrics to come from a place of victimization. 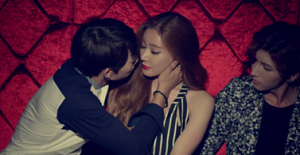 If you want to do a song about how hurtful infidelity is, then you should follow in the steps of JYJ; with the trio’s work on “Get Out,” it’s obvious that the man’s been wronged. In the case of “Don’t Flirt,” I can’t help but feel like it will lead some young women into thinking that being sexual is “nasty” – as if they needed more help with that.

Despite my extreme misgivings about the MV and song’s message, I can’t deny that the MV itself is actually well done. The meaning of this MV may bother me but I can’t blame U-Kiss for that. I’d also love to see more sexism consciousness in K-pop, but we all know I’m more likely to see a unicorn. Basing my rating on the MV’s camera work, editing, choreography, fashion and acting — and completely ignoring the implied message — I give it an overall score of 3.8/5.

What are your thoughts on this? Let us know!