All the World's A Ramp? Dissecting Idol Airport Fashion

K-pop idols are often sacrificed at the altar of fashion dissection pretty much every time they are captured on lens, irrespective of the context of the picture. Fans have taken unto themselves to carry out the Herculean task of acting as fashion police because obviously, the K-pop industry does not have derisive fashion critics in sufficient numbers to pick on fashion ‘disasters’, which has given birth to the ridiculous tradition of ‘airport fashion.’

From shredding the status of an ill-chosen faded jeans to eulogizing the existence of a well-stitched jacket, ‘critics’ are forever debating whether to travel in comfort or travel in style, often coming up with the unanimous (and hypocritical) answer of “comfort and style,” the “comfort” being silent. With runways having lost their contextual meaning, it is no wonder that even fashion has lost the same.

There are tumblr blogs devoted to the high art of airport fashion and to a certain extent, these blogs with their high definition pictures and ‘insightful’ analysis of how idols assimilate the perfect airport attire are harmless and to some, even intriguing, but things get messy and slanderous when people decide to ‘critically criticize crappy clobber’. Comparisons between the best and worst of airport fashions pit idols in competition against each other and compel them to be at their fashionable best at all times bringing in the public-private role debate.

An idol is a public figure, his /her actions public actions as long as they are under public lens. Therefore, even when they are in airports they are still playing the role of the idol but not explicitly performing the function of one since, they are not expected to address media questions and neither are they expected to showcase their artistic specializations. And when they are not expected to tackle the primary functions of an idol, why in the world should they even bother about secondary functions like making a fashion statement? While the empty rhetoric of “they are also humans” is vocally expressed to defend the many terrible mistakes of an idol, clearly airport fashion mishaps — a world concern — don’t figure as a forgivable mistake.

I cannot reconcile myself to the fact that while we all accuse K-pop of selling unrealistic images of body perfection, conditioning fans to aim for the same, fans don’t mind oppressing themselves by setting ridiculous standards of fashion to follow when in an airport, not to mention that these generalized standards of fashion are completely based on their group biases. With every “Ten ways to get an idol’s airport fashion,” they create this make-believe world for consumers that dressing like an idol is no big deal because everybody has access to expensive brands, everyone has just one body type, and that an idol’s airport fashion is the only fashion that matters. Being yourself is so mainstream; be a non-conformist, be your idol! 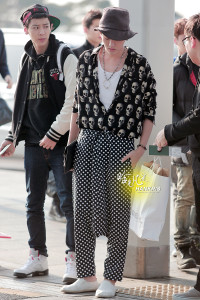 As surprising as it sounds, people are usually in the airport with the purpose of travelling often for long hours. And another surprising fact is that airport guidelines usually advice passengers to not wear uncomfortable attire, including heels, and clothing which restricts movement. Therefore to force your idols to wear what’s in trend just for the sake of pleasing your eyes despite airport authorities waving the placard of ‘comfortable clothes’, is inhuman and honestly, very, very ridiculous.

While some idols like KARA‘s Seungyeon, burdened by the increasing load on their public image, have spoken against this laughable culture, they really cannot extricate themselves from the seemingly innocuous trend of airport fashion because if there is one thing certain fans are exceptionally talented at, then it has to be spewing bitter hatred all over the internet whether it be against fellow fans or idols. Entitled to publish their enlightening views online, idols failing to meet their airport fashion standards will and do receive excessive backlash.

At the end of the day, it all falls in the hands of fans to cut their beloved idols some slack and rescue them from this bitingly hilarious trend. All the world’s not a ramp and all the men and woman not merely models, so stop keeping a needless fashion conscious track of their exits and entrances.