Four Minutes to Build a Case for Cultural Sensitivity 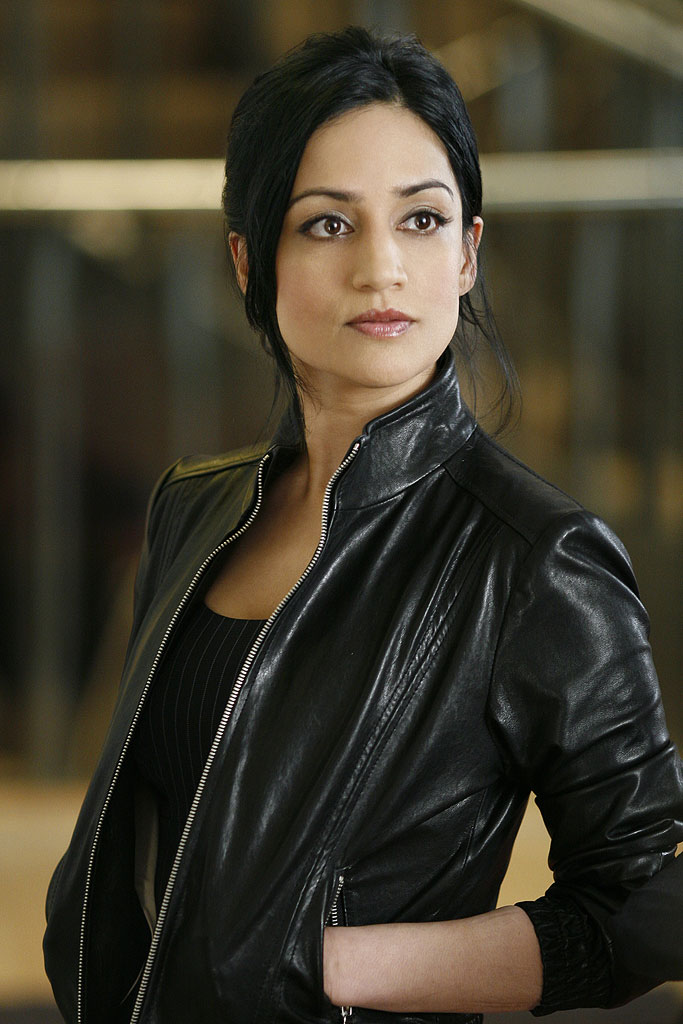 When they had newly migrated to Australia, my parents would experience rare moments when, in the endless sea of white people, they would see someone with dark skin or black hair, and their faces would light up with the joy of seeing someone remotely South Asian who reminded them of home and of themselves. When they recall these brief moments, I recall a similar feeling I get — not from seeing another Indian walking down the street, but from seeing people with the same skin colour as me and similar funny-sounding names like mine on TV, in movies and in magazines; seeing myself reflected in the mainstream media of a society where I am, despite having been essentially raised by it, part of a minority makes me feel included as a more visible and active member of society. It’s as if society is saying “yes, we see you too, you are not invisible!” And it’s not restricted to just ethnicity: even the most cynical of K-pop fans would get a bit excited when they see SNSD perform on David Letterman, or Big Bang beat out Britney Spears for a MTV award (even if is voter-based).

So, you might be able to imagine my response when I discovered that 4Minute had created an “Indian version” of their latest single “Volume Up.” Having an old love (Indian music) and a new love (K-pop) come together in this way made all those feelings of recognition and appreciation come to the fore — for a while.


Mnet’s new TV show Yoo Se-yoon’s Art Video features the titular Yoo Se-yoon, a comedian who has decided on a career change and become a director specialising in MVs — and have the entire thing captured on camera, of course. In the third episode, Yoo Se-yoon is appoached by the ladies of 4minute to shoot a video for their group (because they’d heard about how great he was, not because they were paid to appear on the show, of course not, nooo). Maknae So-hyun mentions wanting to try belly dancing, and next thing you know, Yoo has decided on an Indian setting for this project. Belly dancing actually hails from the Middle East, but who cares about that, we’re going to India! 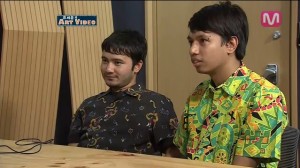 The main problem with this whole endeavour was its earnestness: everything (with few exceptions) was done in total seriousness — but it was all so wrong. Yoo Se-yoon & co. went to a lot of effort to make the MV as authentically Indian as possible: they watched videos of Indian songs found online for inspiration, hired a couple of Indian guys to appear in the MV and even outsourced the writing of the Hindi lyrics (because singing in Hindi makes the MV even more authentic — excuse me while I introduce my head to my desk) to actual Indians. Unfortunately, it seems the saying that “The Road to Hell is Paved with Good Intentions” is in fact true, because: 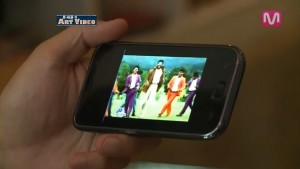 If you saw the MV, you’ll know that the other Indian actor was the saxophone player… who was performing yoga at the same time. Yes, yoga is an Indian product, and the actor contorting himself is very skilled, but the way it was portrayed was bordering on farcical. The saxophone can be played while sitting in the lotus position, but doing the same with your ankle behind your neck? All that seems to say is “Hey we have a guy doing contortions! That’s so Indian!” Which it isn’t. Not by a long shot.

Watching the show, the straight-faced manner in which everything was executed made me cringe. I don’t know whether to be offended that no real attempt was made to truly understand Indian culture and instead wield it to make profit, or feel sorry that all this care and hard work put into ensuring accuracy had essentially gone to waste, and, worse yet, that they didn’t even realise it. Ignorance is always more harmful than malice, and it is very evident in this case. 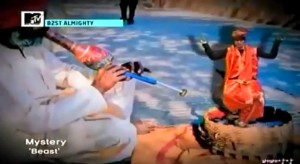 Of course, 4Minute aren’t the first idols to feature India in their material. Label-mate Beast once made a parody version of “Mystery,” wherein a heartbroken Dong-woon drowns his sorrows in some rather funky curry: one minute he’s gulping down mouthfuls of instant curry, the next he’s cavorting around in “India” while wearing a turban, because, of course, cultural appropriation of Indian culture is incomplete without a turban. Yes, this video was made as a joke, with nary an attempt at being serious, but it doesn’t change the fact that Beast are portraying stereotypes, and portraying them crudely at that. Many people find this funny, including people of Indian origin (let’s face it, the video is pure crack), but it can’t be denied that at the heart of the humour lies ignorance, no matter how benign it is. That Beast thinks that all Indian men wear turbans is not unreasonable to assume — who knows what other stereotypes of India  they consider to be also true? Parody only works when those carrying it out are fully aware of the subject matter, and that the parody is very different from reality: otherwise it just becomes offensive.

Herein lies the crux of the matter: how malicious does the intent or extent of cultural appropriation have to be for one to find it offensive? In the grand scheme of things, having one’s film culture parodied isn’t as severe as being portrayed as sex objects/deviants or having people paint their face to “resemble” your skin tone, but it still hurts, and it is still offensive. If you found the Beast MV, or the 4Minute MV, funny and have no problem with it, that’s that — but it is important to realise that this is cultural appropriation, and that Indian culture (or what is perceived to be as such) is being used for mostly aesthetic purposes; nothing deep or meaningful  is being said about the culture, it’s just being used to lend an “exotic” air to these artistic endeavours. And if you feel uncomfortable about any aspect of a portrayal of your culture, then you are free to feel that way as well. Just because your favourite idols deigned to acknowledge your culture, it does not mean you are obliged in any way to be okay with it.

I have no doubt that these parodies were not done to hurt or insult Indians or people of Indian heritage, but a lack of proper knowledge makes 4Minute and Beast appear insensitive when the opposite is true, especially in the case of 4Minute. Earlier this month, Ji-yoon gave an interview, saying:

Since we actively perform overseas, I realized that we should not only learn other languages, but also undoubtedly learn their cultures as well.

Had 4Minute known that their “Indian Version” MV would be guilty of cultural ignorance and appropriation, they would not have been so comfortable with it, especially when they are so conscious of respecting other cultures. As stated before, the main problem is not intent but knowledge, or the lack thereof. If people were better educated about a culture, they would know that many of the notions they associate with a culture are just not right, and would avoid displaying them in their work and in their attitudes towards other cultures.

It’s one thing to see your favourite idols dance to a bollywood song, or recommend an Indian movie on Twitter; it’s quite another to see them dressed in turbans and appearing  in MVs with multiple arms. All I ask is that if my culture is used in another culture, it is portrayed in a respectful and sensitive manner. I’m not asking for people to bow down to Indian culture or treat it as something sacred, but to give an informed portrayal of it. After all, even K-pop has been the subject of appropriation itself (hello, Heart2Heart), so I would like to think that it and its fans would understand the reasoning behind such a request.

What do you think of the 4Minute MV, Seoulmates? And the Beast one, for that matter? Have you ever felt uncomfortable with the way a culture has been portrayed by media? Leave your comments below!