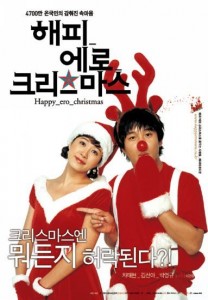 There are certain types of people in the world who tend to over-sentimentalize the holidays, especially Christmas. Based on the dozen or so movies he’s made, you’d have to expect that Cha Tae-hyun would be one of them — or at least his characters are. So it’s entirely fitting then that that’s exactly what happens in Happy Ero Christmas, a romantic comedy set in a small spa town as Christmas approaches.

Cha plays Seong Byung-ki, a well-meaning but hapless young cop that gets no respect from anyone in town, not even his fellow officers. Byung-ki grew up in this small town, which is seemingly run by gangsters, and they’ve been giving him a rough go of it since he was a a child. He’s been dead set on cleaning out the gangsters ever since one of them, Bang Suk-doo, threw him into a scalding hot bath when he was too small to fight back. But given his low position in the police force and the clout of the gangs, he’s unable to do so. He spends most of his time trying to get the attention of Min-kyeong (Kim Seon-ah), the shy, loney bowling alley clerk who doesn’t seem to have any interest in him. Byung-ki initially tries to downplay his interest in Christmas, but is unable to when he discovers that it is also Min-kyeong’s birthday.

[youtube http://www.youtube.com/watch?v=jszu1X0o8VY]Suk-doo himself, who has grown to become boss of one of the warring gangs, is just recently out of prison and extremely lonely when we meet him. Instead of running his buisiness with the iron fist normally required of such a profession, he whiles away his days watching Shunji Iwai’s snowy, sentimental Love Letter, wistfully hoping he could find a girl like that one day too. His underlings, faced with a rival gang moving in on their territory — headquarted in “the Sexy Palace” — don’t understand his new outlook, which seems to forbid the violence they crave. He just doesn’t want any of them to spend Christmas in prison like he did.

Naturally, when Suk-doo finds a girl to fall in love with, it’s Min-kyeong, who he only notices when she accidentaly spits on his head. It’s fate, he says, because it would have been too difficult to spit on his head if she were really trying. Min-kyeong, for her part, is afraid of Suk-soo at first because of his gangster ways, but softens her stance on him somewhat when he reveals his gentle side to her, lavishing her with gifts and flowers. Byung-ki becomes desperate to keep her out of trouble when he finds out about Suk-doo’s full court press on her, and installs a police box in front of her house, vowing to never be more than three minutes away from her should she be in trouble and need him, but his still bubbling rage over Suk-doo dumping him into the hot spa as a child turns him into the monster that she ends up despising. 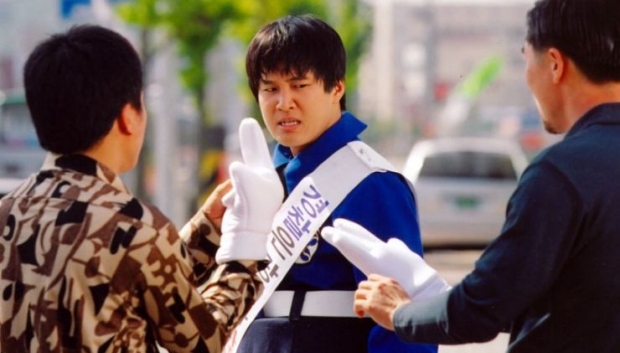 Happy Ero Christmas was directed by Lee Geon-dong, one of the many Korean directors that, as far as I can tell, has only directed one film. It’s not hard to figure why. The film is truly a mess, a funny-violent Korean slapstick put together in the same style of an ensemble piece like Love Actually, but without the technical efficiency or slickness of Richard Curtis. The comedy is often glacially-paced, and many of the story strands are only peripherally connected to the main story of Byung-ki and Suk-doo’s rivalry. Of these, there is one brilliantly funny sequence during the 18th Annual Mrs. Spa pageant, but verbalizing the joke would only ruin it.

The movie is flawed, but not fatally so. It stays afloat through the flaws because of chemistry between Cha Tae-hyun and Park Yeong-gyoo, who are great foils for each other. In fact, much of what you feel about this film will lay squarely with how you feel about Cha Tae-hyun. Like a lot of Westerners, my first expeience with South Korean film was seeing Cha deal with a drunk, passed out Jun Ji-hyun on a subway platform in My Sassy Girl, and Cha plays basically the same role here. That’s the persona he has cultivated since My Sassy Girl, playing the sweet, if a bit goofy, nice guy. Despite being nice guys, his characters are prone to bouts of righteous indignation, and even violence, though he usually ends up taking the brunt of it himself. He takes it so well, constantly popping up with an undefeated smile through the pain, that I find it hard to belive anyone could not like him. He’s not quite as endearing in Happy Ero Christmas as he was in My Sassy Girl or even Speedy Scandal, but he’s got just enough charm here to make it work anyway.