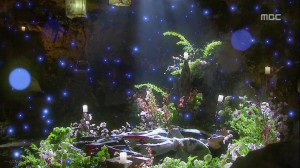 It’s time for some summer loving and there’s been lots to love in the world of Korean Entertainment.  And with every thing new that’s starting we also have some things ending–like the K-drama Gu Family Book. While it hasn’t been perfect–so not the K-drama ending I wanted for Kang-chi’s parents, but one that worked and was beautiful–I’m still loving it and will be sad to watch the last two episodes this week. Honorable mention this week goes out to Super Junior M’s Henry and his piano performance of “Trap.”

The following are my picks for the top 5 things that happened in K-pop last week.  If you’re not up-to-date on your K-pop, don’t like spoilers and you read any further, well ‘”that’s the worst thing you could do.”

It was the cast of Infinity Challenge’s spontaneous vacation mission where they had to complete various tasks to see where they would be going, how much money they’d have to spend and what they would have to wear.  The funniest thing about the outfits that they ended up having to wear was that it was outfits that the cast brought themselves–like the purple aloha shirt dress(?) worn by Park Myung-soo was apparently bought by Jung Hyung-don on one of his trips to Hawaii and Park Myung-soo in turn brought Jung Hyung-don’s transparent wear, Gil brought Noh Hong-chul‘s styling ahjumma outfit, Gil’s briefs were brought by HaHa, HaHa’s droopy drawers were once Jung Jun-ha‘s wrestling briefs, Jung Jun-ha’s ‘hot’ get up was brought by the Nation’s MC Yoo Jae-suk who was wearing No Hong-chul’s pink extavaganza.

Do?!  It was the continuation of Minho and Key‘s visit with the newlyweds on We Got Married and just when they thought they were gone, they weren’t.  It was a pretty funny prank and crucial lesson–you should always lock your doors.  I have  to admit that Taemin and Na-eun are pretty adorable and a lot more fun than I thought they would be.

The Infinite Challenge members weren’t the only cast going on a spontaneous vacation as the members of 1N2D were doing a similar mission. As part of their mission they played and granted wishes to some fans who were lucky enough to be in the right place at the right time.  This clip is not only hilarious because of the sexy dancing by the girls–keep an eye on Cha Tae-hyun.

Technically, I’m cheating a bit in this selection because it was just released yesterday, but this is too good to wait a another week for. Verbal Jint released his latest song “Walking in the Rain” featuring Bumkey and not only is the song sick (sick as in good, not sick as in well, sick) the MV is excellent too with a performance in the rain by Poppin’ Hyung-joon and a love line starring actress Uhm Hyun-kyung and Jae-woong, a member of an upcoming hip-hop group Troy.

1. A Swamp Full Of Tears

So far in the K-drama Monstar, we hadn’t learnt much about the character of Nana played by GLAM‘s Dahee, but finally in last week’s episode we got to see a little more of who Nana is other than a mysterious girl with a sketchy background.  After seeing Se-yi and Sun-woo on a date, she rushes to her mother’s club and sings her heartbreak out to Jo Kwan-woo‘s “Swamp” accompanied on guitar by one of the club’s waiters. There were hints in past episodes, but the secret of Nana‘s unrequited love for Sun-woo was finally revealed.  It was a great performance by Dahee and finally we were treated to more than a “shut up” and “you wanna die.” The whole scene kind of reminded me of Olivia Newton John‘s “Hopelessly Devoted To You” from the classic movie Grease.